Can Southwestern Ukraine Become a Trouble-spot? 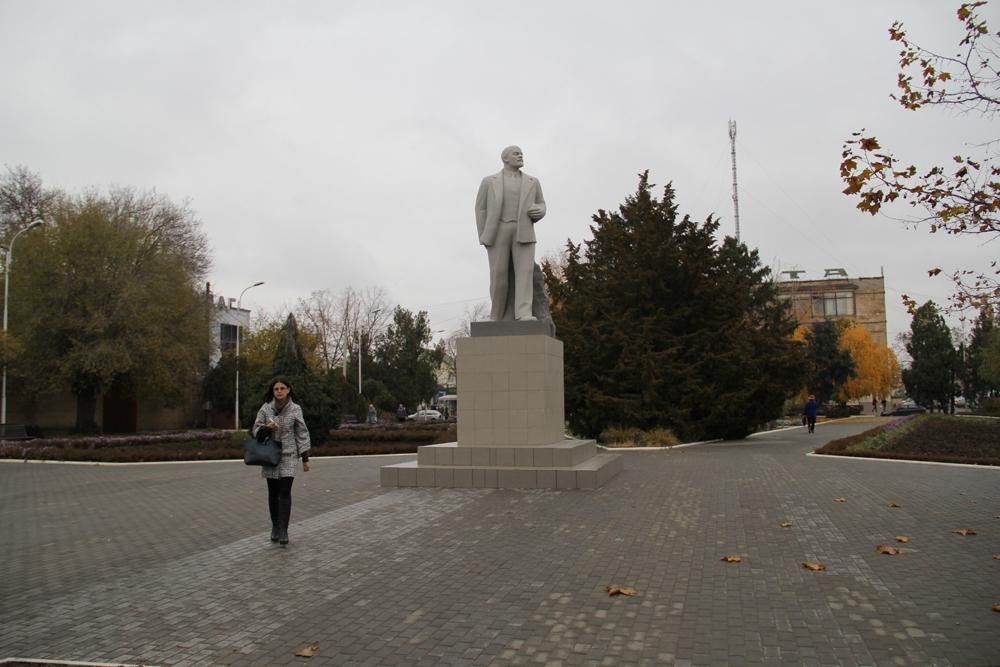 A statue of Vladimir Lenin looms over Izmail, the administrative center of Bessarabia. (Photo: Katya Kumkova)

The failure of a ceasefire to take hold in eastern Ukraine is stoking concerns about a potential revival of trouble elsewhere.

An area of particular concern is the Ukrainian portion of Bessarabia, an oblong stretch of land southwest of Odessa, bound by the Black Sea to the east, Moldova to the west, and Romania to the south. Ranging along the north bank of the Danube River, the region features still-prosperous farms and abundant fishing. But it is also a region in the grip of a general economic malaise, where factories keep closing, even as local oligarchs keep profiteering.

“This is not the Donbas, with its economic problems and a disaffected population,” commented Anatoliy Baronin, an analyst who tracks developments in the region. “Here we should expect political moves. … A [military or financial] crisis scenario would supply the possibility for destabilization.”

Talk of a “People’s Republic” of Bessarabia began circulating last spring amid a spike in separatist sentiment after the Euromaidan Revolution installed a European-oriented government in Kyiv. While separatism in the Lugansk and Donetsk regions in eastern Ukraine quickly coalesced into an armed insurrection backed by Russia, Ukrainian authorities managed to keep discontent under control in other restive cities and regions, including Bessarabia, Kharkiv and Odessa.

Back in November, however, an Odessa-based risk analysis firm called Da Vinci Consulting published a report, titled On the Danger of the Formation of a Bessarabian People’s Republic. The report asserted that Bessarabia, given its large percentage of ethnic minorities, including Bulgarians (21 percent), Moldovans (13 percent), and Gagauz, a Turkic minority (about 4 percent), posed a special threat to Ukrainian stability. Ukrainians and Russian comprise the bulk of the rest of Ukrainian Bessarabia’s population.

The report paid particular attention to what some have called the “center-periphery problem” of discord between regions and Kyiv, as well as the potential for unrest among Ukraine’s Gagauz community. In neighboring Moldova, the Gagauz secured broad cultural autonomy in the mid-1990s. The report suggested that the Kremlin had the means to induce Gagauz politicians on both sides of the Ukrainian-Moldovan border to join forces and stir up trouble.

“Today Gagauzia is the main center of activity for the Kremlin in the region,” the report stated, noting that 98 percent of Gagauz in Moldova expressed support in a referendum held in early 2014 for seceding from Moldova, if the country went ahead with plans for European integration. Moldova signed an association agreement with the European Union last summer.

The Da Vinci report profiled four local political actors to keep an eye on: Mikhail Formuzal, the current governor of Moldovan Gagauzia; Nikolay Dudoglo, the mayor of Komrat, the Gagauz capital; Yuriy Dimchoglo, a Ukrainian Gagauz member of the Odessa regional council; and Anton Kisse, an ethnic Bulgarian and long-time member of the Ukrainian Rada who lauded Gagauz voters for voting against EU integration in early 2014. All four are considered to be allied with pro-Russia interests, and both Ukrainian representatives were previously part of former president Victor Yanukovych’s Party of Regions.

“The one thing I am convinced of right now is that destabilization will be impossible without the active participation from … those who represent Russia,” Baronin, who heads the Da Vinci Group, told EurasiaNet.org. He assailed the four politicians as “agents.”

Since the appearance of the report, Formuzal, Dudoglo, Dimchoglo and Kisse each have made repeated statements in support of peace and Ukrainian sovereignty. Even so, here, as elsewhere in Ukraine where pro-Russian sentiment dominates, a desire for peace does not automatically mean a rejection of Russia.

“People are living under the motto ‘as long as there’s no war,’” said Svetlana Gud, an activist in Izmail, Ukrainian Bessarabia’s administrative center, who is affiliated with the Committee of Voters, a national monitoring organization. ”They just believe that if Putin comes, he’ll protect them, and there’ll be no war. That the war is being kept warm by this aggressor, they don’t think about that.”

Observers worry that many residents of Bessarabia, especially Russian-speakers, are susceptible to Kremlin propaganda.

“For many people who never learned the Ukrainian language … they kept automatically listening and watching Russian [television] channels,” Valeriy Peykov, a commentator for the BessarabiaInfo news website, noted in a recent interview. “Everything that they know about what’s going on in the world, in Russia, in Ukraine, they saw it there.”

In Izmail, those who openly support the government in Kyiv can face hostility. One such individual, Larisa Marar, a homemaker, said she encountered lots of derision recently when she tried to solicit donations for Ukrainian troops fighting in the Donbas region. Marar admitted that her support for the Euromaidan cause has cost her some friendships, but she added that it was a price she was willing to pay.

“Yes, [Russia] is the land of our forefathers, but what we have to think about is what will we pass on to our children.” she said.