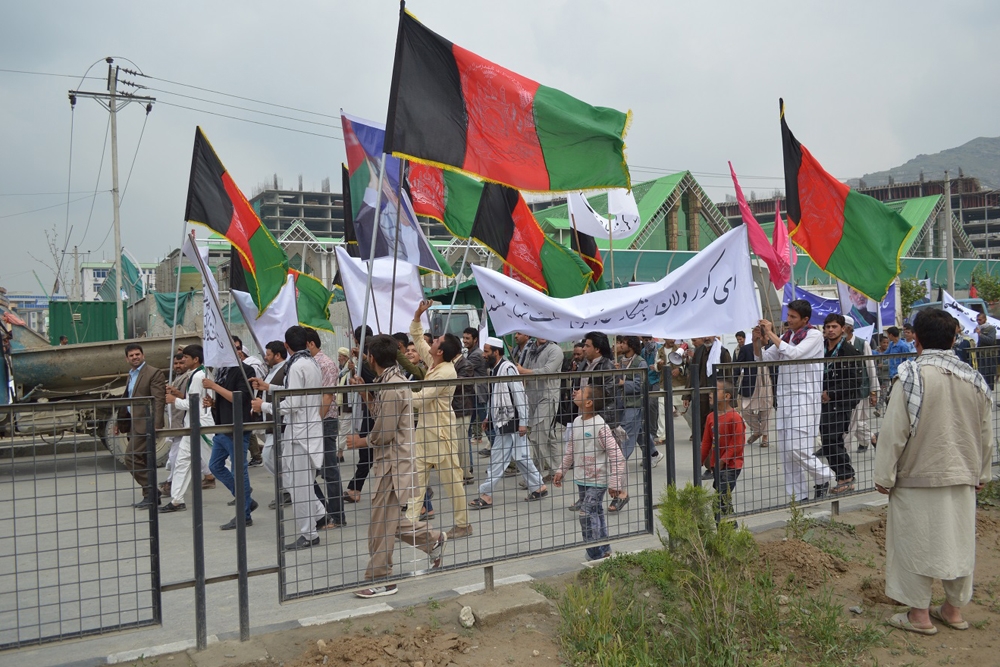 A protest in Kabul in May 2014. There is little doubt that Afghanistan needs security, infrastructure, and humanitarian assistance just to stay afloat. Continued progress, however, will only come with a renewed commitment to the country’s activists, protesters, media workers, and journalists. (Photo: Democracy International)

Proliferating blast walls and security checkpoints have transformed the Afghan capital, Kabul, into a maze of concrete. Driving is increasingly arduous. Cars and mopeds carrying explosives are a serious concern – so much so that many diplomats and international contractors now avoid the roads altogether.

For those that can’t take to the sky, rain poses a constant threat. Even insignificant amounts of precipitation can overwhelm the city’s open sewage system and bring traffic to a standstill.

From a driver’s perspective, then, there is little to show for 15 years of reconstruction since the Taliban tried to turn back the clock in Afghanistan. Yet that doesn’t mean there hasn’t been progress.

For one, drivers in Kabul can now listen to almost any genre, including American pop, on FM radio. That might not seem like such a big deal, but for Afghanistan, it is a significant accomplishment. With the exception of some religious songs and Taliban “chants,” music was completely censored under Taliban rule, and independent broadcasting was forbidden. This stands in stark contrast with the country today, where the latest from Afghanistan’s Farzana Laz, or even America’s Taylor Swift, can provide a measure of relief for those navigating a city under siege, in a country most people want to flee.

At a time when the entire American-led effort in Afghanistan is under unprecedented scrutiny, the growth of the Afghan media landscape and, to a lesser extent, its civil society sector is a clear “win” for international development and, more importantly, for the Afghan people. Afghans not only have wide access to the radio, but to a host of media outlets. They are also making themselves heard on social media, on the streets, and through the country’s nascent civil society, which has clawed its way to political relevance.

There is little doubt that Afghanistan needs security, infrastructure, and humanitarian assistance just to stay afloat. Continued progress, however, will only come with a renewed commitment to the country’s activists, protesters, media workers, and journalists.

Today, Afghanistan is at an inflection point. While Afghanistan’s National Unity Government survived September, and will likely survive 2016, the bad developments are quite bad. The country’s leadership in Kabul has been hamstrung by internal feuds and delayed critical electoral reforms, leading to an extra-constitutional parliament. While elites have bickered, Taliban militants have expanded their influence from their historical stronghold in the south to regions in the north – places that were once Western-oriented.

Islamic State has done its part to add to the country’s misery. On July 23, militants orchestrated a horrific twin bombing in Kabul against peaceful demonstrators who were expressing opposition to the proposed Turkmenistan-Uzbekistan-Tajikistan-Afghanistan-Pakistan power grid. It was the deadliest day in the city since 2001. Meanwhile, the borders of neighboring states – including Iran, Pakistan, Uzbekistan, and Turkmenistan – remain porous and thereby enable those seeking to destabilize Afghanistan.

But the country isn’t doomed to failed statehood. The Taliban is unable to control major cities. And while provincial authority in Afghanistan remains notoriously weak, Afghans do not appear to find rule under the Taliban any more appealing.

In provinces like Jowzjan, a northern border province under threat from both the Taliban and the Islamic Movement of Uzbekistan (IMU), citizens have taken up arms to support government forces. The Islamic State and its affiliates, such as the IMU, have been weakened by arrests, strikes against their leadership, and defections. And politically, President Ashraf Ghani and Chief Executive Abdullah Abdullah recently announced a tentative agreement to implement electoral reforms.

These positive developments, however limited, have been buoyed by continuous contributions from the media and civil society.

In April, a local production of Sesame Street introduced “Zari,” a female Muppet, to encourage literacy among girls. Zari might only be a puppet, and her effect will take years to measure, but she represents a great leap forward for social progress in a country where dolls and stuffed animals were not too long ago outlawed.

“Clean up your City,” a Kabul talk show that aims to hold politicians accountable for their actions, continues to rank among the most popular broadcasts in the country. And, behind the headlines, a network of civil society organizations has advocated, successfully it appears, for electoral reform.

These accomplishments seem to confirm the thesis accepted by the international community that local media outlets and civil society organizations are efficient and certainly cost-effective means to achieve development and diplomatic objectives.

In today’s Afghanistan, where travel outside of Kabul – not to mention within the city – is now nearly impossible for diplomatic staff and foreign aid workers, the most basic outreach or programming efforts are impossible without local talent. But journalists, activists, and others provide far more value than their ability to speak Pashto or Dari and move about without a security escort. They are equally, if not more, creative and relevant than their international counterparts.

A splashy accountability and human rights monitoring platform funded by the US Agency for International Development (USAID) and hosted on TOLO TV, the country’s’ most popular television network, reaches a wider audience on a more engaging platform than, say, any human rights press release issued from the US Embassy.

But supporting Afghanistan’s media and civil society sector is not only about promoting democracy, or electoral reform. It is also about creating economic opportunity. The booming media landscape is a testament to the possibilities of the so-called “public-private” partnership: although many outlets still rely on public support, investment from the private sector – primarily in the form of advertising revenue – has magnified the effect of initial support provided by Western aid agencies and NGOs.

According to Altai Consulting’s analysis of the Afghan media, Afghanistan is now home to numerous news outlets, around 100 TV channels, and over 250 radio channels. Internet penetration has doubled from under 6 percent in 2013 to 12 percent this year.

It is estimated that there are over 10,000 journalists working in Afghanistan; even more are employed providing technical support to the country’s growing media infrastructure. Although far fewer work for civil society organizations, and while there are genuine concerns about these organizations' sustainability, Afghanistan’s civil society sector currently is able to fill critical gaps in the county’s economy by providing educational opportunities and vocational training.

On a regional scale, cultural exchanges, such as a joint Uzbek-Afghan photography exhibition in Mazar-e-Sharif this summer, help advance the Afghan government’s broader agenda to improve economic and security ties with its neighbors in Central and Southeast Asia.

More fundamentally, whether it is Taylor Swift on the airways or Zari appearing in New York with the country’s First Lady, Afghanistan has opened to the world – at least digitally. While Western journalists have fled or lost interest, citizen journalism and social media use has soared, providing a thin, but very human, layer of security. As one of my Afghan colleagues mentioned, “there is hope [that the Taliban won’t return] because we have learned from the world, and know the world is watching.”

Of course, not all Afghans can benefit from these opportunities. The country remains highly segregated by gender, including in its work patterns and media consumption. Women are often not permitted to watch television, let alone support an organization advancing political reforms.

Some have responded to this challenge: a businessman in Kabul recently opened a theater exclusively for families, providing a way for women to watch movies in public. But these examples are frustratingly rare. Improved and inclusive access to the media, information, and assembly will require long-term entrepreneurial thinking.

Unfortunately, at this juncture in Afghanistan’s trajectory, discussing the “long-term” might be overly ambitious, including when it comes to the media and civil society. In 2015, the Taliban started to threaten journalists – an about face for a group that has strategically relied on the media to cover its attacks. The Taliban have made good on their threats, killing seven media workers in a suicide attack this January, as well as a veteran NPR journalist and his Afghan colleague in August. Both events sent shockwaves through the country’s media community and made this the deadliest year on record for workers in the sector since 2001.

In addition, the Taliban continue to target civil society and human rights activists and humanitarian aid workers, the vast majority of whom are local hires. Afghanistan continues to rank as the most dangerous country for aid work.

Media workers and activists are not only under threat from extremists, but from the government as well. Social media users are increasingly engaging in self-censorship because of government threats. Activists who focus on sensitive subjects, including human rights and corruption, face harassment. Just this summer, at a demonstration against a power line project in Bamiyan Province, security officials detained activists who were organizing the protest and allegedly beat journalists.

While the government has legitimate reasons to worry about mass protests – particularly after the July 23 bombing in Kabul – this heavy-handed response does little to enhance real security. To his credit, President Ghani called for a probe into the Bamiyan protest case and routinely states his support for the media and civil society. His office, however, has yet to take substantive action to address the issue of violence against journalists.

To keep the country moving forward, Afghanistan’s international partners need to remind themselves of what has worked, apply relevant political pressure, and continue to look for smart investments in the media and in non-governmental organizations.

Keeping Taylor Swift on the airwaves, Zari in the orphanages, and citizen journalists online might be the country’s last hope for stability and prosperity. Today’s Afghanistan might be loud, chaotic, and confusing, but silence will most certainly signal the start of a slide into the abyss.

Andrew Bogrand tracks developments in Afghanistan in his capacity as communications and outreach officer for Democracy International.