While Uzbekistan debates joining the Eurasian Economic Union, what does the country stand to gain from membership in the Russia-led trade bloc? 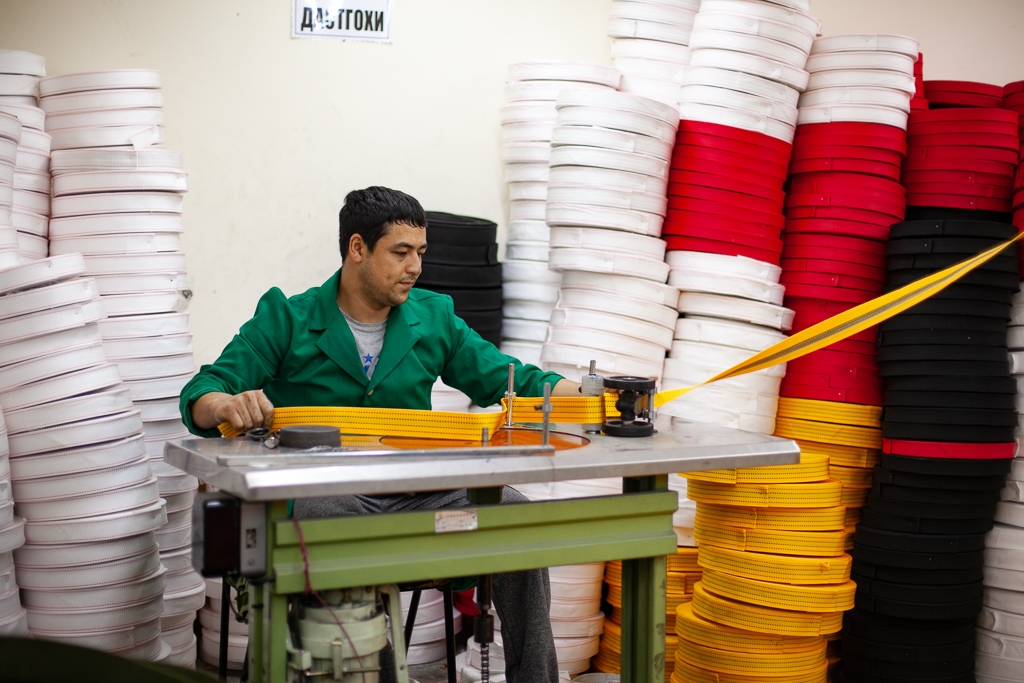 The EAEU would give Uzbek textiles preferential access to the Russian market, but also could bring in competition. (David Trilling)

In recent months, a drumbeat of statements from Uzbek and Russian officials have fueled speculation that Uzbekistan will soon join the Russia-led Eurasian Economic Union, or EAEU.

President Shavkat Mirziyoyev has made regional integration and trade liberalization priorities since succeeding the isolationist Islam Karimov in 2016. With the region’s largest population, and being the only Central Asian country to border all the others, Uzbekistan is a tempting prize for any trade bloc.

The EAEU exhorts four freedoms: the free movement of labor, goods, capital and services. A look at how the five incumbents – Armenia, Belarus, Kazakhstan, Kyrgyzstan and Russia – have fared since the EAEU was formed in 2015 offers some idea what Uzbekistan stands to gain and lose.

Labor: The most apparent gain would be from the movement of labor. Uzbekistan has a large and growing young population. Easier access to Russia’s labor market would allay pressure on Tashkent to stimulate job growth. There can be no denying that smaller countries such as Armenia and Kyrgyzstan have benefited from fairly unfettered access to Russian jobs, though access has come at a cost: Kyrgyzstan in particular is overwhelmingly dependent on remittances from Russia, offering authorities there a pressure valve (to release angry young men) rather than an incentive to reform (clean up corruption and create jobs).

The freedom of movement also works in favor of the Russian economy, which enjoys a steady influx of cheap workers that drive down costs, especially in construction and services. This advantage to the Russian economy becomes even more clear in light of Russia’s aging and shrinking population.

Goods: Belarus and Armenia have gained from relatively cheap access to Russian natural gas. But EAEU accession forced members (especially Kyrgyzstan and Armenia, which had liberal trade regimes with lower tariffs) to raise tariffs, making imports from outside the bloc more expensive.

Textiles and cotton comprise the majority of Uzbekistan’s exports to Russia. This industry could see new demand. On the flip side, however, Uzbekistan’s businesses have enjoyed decades of preferential treatment; opening up the domestic market to Russian competitors could hurt.

Before the EAEU, progress had been made reducing trade barriers in the former Soviet space. Aside from the Eurasian Economic Union, many Soviet successor states have pursued preferential trade agreements with each other. And other trade groups still exist. In 2013 Uzbekistan ratified membership in the Commonwealth of Independent States Free Trade Area (CISFTA), joining Armenia, Belarus, Kazakhstan, Kyrgyzstan, Moldova, Russia, Tajikistan and Ukraine. The CISFTA dropped import and export duties on about 90 percent of goods traded within the CIS. The EAEU expands the number of goods traded without exceptions, but the CISFTA is still important for trading with non-EAEU countries, such as Ukraine.

Capital and services: Despite promises, the EAEU has not led to a significant increase in capital flows between member states. The bulk of both Russia and Kazakhstan’s outward foreign direct investment is aimed beyond the EAEU. Uzbekistan has already managed to attract significant investment from Russia, especially in the energy sector; thanks to the country’s opening-up, this trend will likely continue with or without EAEU accession.

As a member, Uzbekistan would lose control over trade policy, transferring the right to negotiate trade agreements to the bloc as a whole. The most successful free-trade agreement the EAEU has signed thus far is with Vietnam – and the benefits to members are lopsided in favor of Russia and Kazakhstan. After accession, should Tashkent wish to liberalize its trade regime even further, it would be forbidden.

Recent internal EAEU disputes may also give Tashkent pause. The bloc faces sustained questions about its ability to mediate between members. Kazakhstan held up Kyrgyz goods in 2017, in what looked like a political gesture following bickering between the two countries’ presidents. More recently, in November, Kazakhstan complained it was losing $11 million per month owing to Russian restrictions on coal transiting to Ukraine. And this month, Russia and Belarus have been feuding over the terms of a new oil-supply contract.

It is not yet clear how hard Moscow is willing to push Tashkent to join. Russia could leverage the million-plus Uzbek labor migrants already working in Russia as well as its sizable market for Uzbek goods, since, after all, Russia comprises almost 19 percent of Uzbekistan’s total trade turnover.

One thing is certain: The more Tashkent opens to the world, the more it faces a choice between regional integration and trade liberalization.