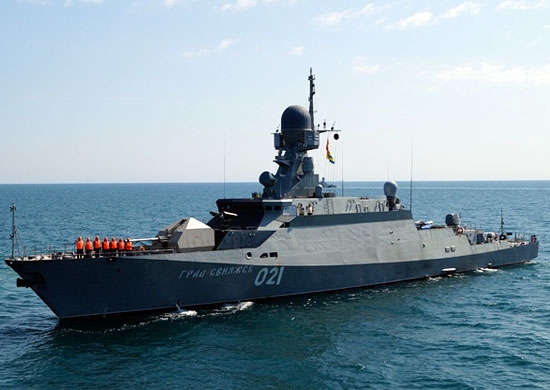 Russia's Grad Slavyansk corvette, to be used for the first time in joint exercises on the Caspian Sea next year. (photo: mil.ru)

The Caspian Sea will see its first -- and probably the world's first -- naval biathlon next summer, with all five littoral states taking part, the Russian Defense Ministry has announced.

The naval biathlon appears to be a spin-off of the tank biathlon that Russia inaugurated in 2013 and expanded into a blockbuster event this year. And the principle will be the same, with ships racing and shooting at targets. Missing a target will result in a penalty lap.

"Such a naval competition is unparalleled in the world," said Russian Caspian Flotilla Commander, Captain 1st Class Ildar Akhmerov, according to TASS.

Each country will compete with one ship and one reserve vessel. Armored personnel carriers will also be part of the competition (it's not clear how) and there will be an athletic portion of the contest, as well, with sailors competing in rowing, weightlifting, swimming, and tug-of-war. The competition will take place over several months, starting in March and ending in August.

Also not yet clear: which ships will be used and what they will shoot with. The naval capabilities of the five countries on the Caspian -- Azerbaijan, Iran, Kazakhstan, Russia, and Turkmenistan -- vary widely. In the tank biathlon almost all participating countries used Russian-provided tanks, but that wouldn't seem to be a workable solution here; it's unlikely the Russian navy would just hand over the keys of one of its ships to Turkmenistan, for example.

On a less festive note, Russia also announced that in 2015 it will be holding one set of joint naval exercises with Azerbaijan, and another with Azerbaijan and Kazakhstan. The exercises will feature, for the first time, Russia's newest class of ship on the sea, the Buyan-class corvette.