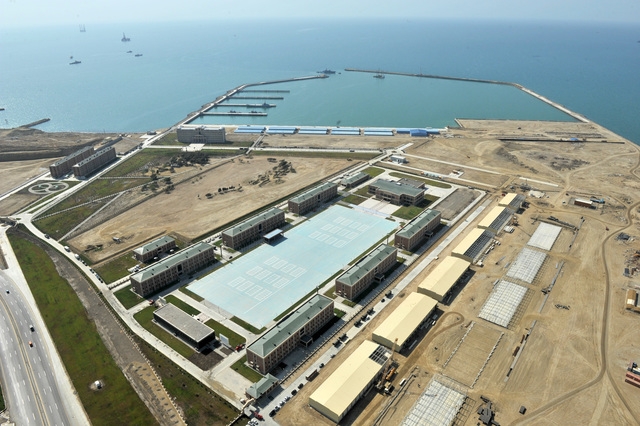 The Caspian sea states will discuss creating a "collective security system" on the sea at a meeting in Russia this fall, a Russian military official announced.

Russia's top naval commander, Admiral Viktor Chirkov, met with naval delegations from Azerbaijan, Iran, and Kazakhstan last week in St. Petersburg, and afterward announced that the states discussed creating a consultative organ of all the Caspian sea navies and a collective security system, and signing an Agreement on the Prevention of Incidents on the Caspian.

"During the meetings with [Admiral Chirkov] the delegations confirmed their readiness to work on these issues, and agreed to conduct the first round of corresponding consultations in Russia in October," the statement from the Russian Ministy of Defense said.

The notion of collective security on the Caspian is a bit odd; it wasn't explicitly mentioned which of the five states would be involved in the organization, but the goal is presumably for all of them to be. And then, on a closed sea with no other potential enemies, the idea of collective security is overkill -- from whom would they be defending themselves?

And two more details from the announcement suggested some roadblocks ahead for any Caspian collective security system. For one, none of the Iranian media reports seemed to mention the notion of collective security. Iran's Mehr News Agency, for example, reported that the outcome of the St. Petersburg meeting was a "draft agreement on maintaining security in the Caspian Sea... without the interference of foreign forces." Iran is the second-strongest naval power on the sea, and the one that most of the other states trust the least.

Secondly, Turkmenistan apparently was not represented at the meeting in St. Petersburg, and it's not clear whether it will be part of the October discussions. Turkmenistan is not seen as a threat on the Caspian (except perhaps to Azerbaijan) and if it were to abstain from this system it would most likely be on its principle of neutrality.

Nevertheless, it does appear like some sort of joint organization of Caspian navies is in the works. And that would help moderate tensions on the sea, and in particular help sort out misunderstandings -- of which there have been many -- before they reach the level of armed conflict.