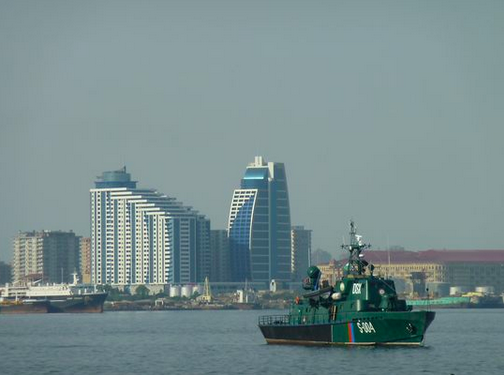 The presidents of the five countries on the Caspian Sea are meeting in Astrakhan, Russia, on Sunday and will agree to "prevent" the military presence of non-littoral countries on the sea, a Russian official has said.

Russia and Iran, the two largest powers on the sea, have long been trying to exclude external powers -- read, the United States -- from establishing a military presence on the sea. The negotiations on this have gone on very much behind the scenes, but the newly independent Caspian countries -- Azerbaijan, Kazakhstan, and Turkmenistan -- have relied to varying degrees on the U.S. to get their new navies up and running. And Azerbaijan, in particular, seemed to be resisting this push to exclude external forces.

"Yes, there are some [American] programs, according to which rearmament of the naval and coast guard forces are being carried out, but this is no cause for alarm that some Caspian country could be a corridor for the military presence of other countries in the Caspian region," said pro-government Baku analyst and journalist, Tofik Abbsov, in an interview in April. He added that reports to the contrary were common in the Russian media and served to "escalate the atmosphere of non-existent trends of tension."

But now Russia and Iran seem to have worn down Baku's resistance. "A political statement was prepared for the summit containing a provision about preventing military presence of non-regional states in the Caspian Sea. There were difficult consultations on the issue, but the sides managed to agree on this principle," said Yuri Ushakov, a Russian presidential aide, on Friday.

It's not clear what "military presence" exactly entails. The U.S. has never had any ships on the Caspian, nor could it ever get them there without the cooperation of Russia, which controls the only outside access to the sea, the Volga River. There has been some substantial (albeit quiet) American advising to the Azerbaijani navy; will Baku somehow be forced to stop that? How about the Turkish and Israeli ships that the newly independent countries have been buying? And China is trying to build warships for both Kazakhstan and Azerbaijan (and possibly is already doing so for Iran). Is that out of bounds now?