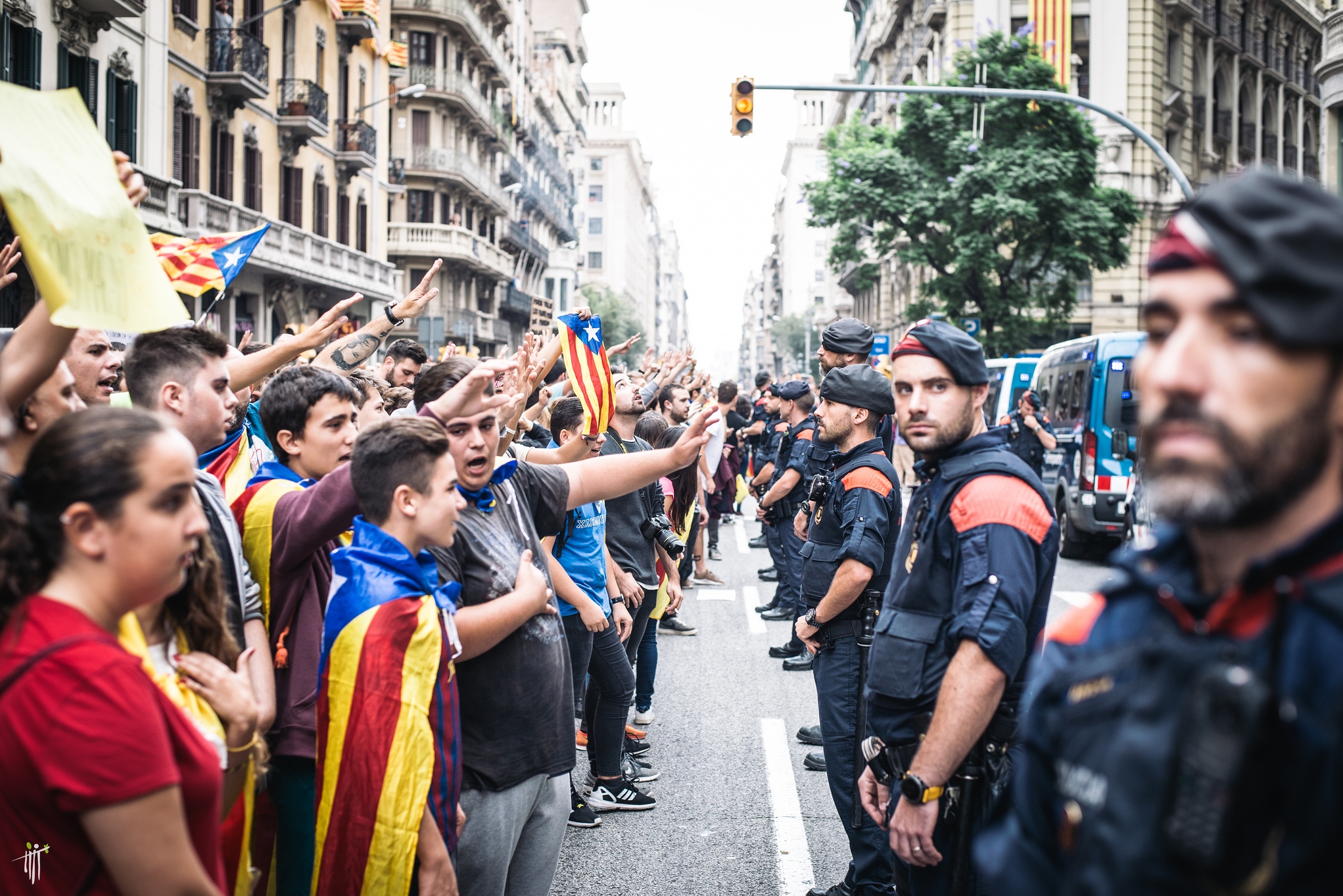 Catalan police officers secure the area outside the General Direction of the National Police of Spain building in Barcelona during a rally against the violence that marred the October 1 referendum. (Photo: Sasha Popovic via Flickr, CC BY-NC-ND 2.0)

The use of heavy-handed tactics by police to disrupt the Catalan referendum on October 1 was more than simply an internal Spanish or European matter. It sent a powerful and damaging message to those living in countries and territories across the former Soviet Union that are experiencing high levels of sectional or interethnic tension.

As a senior advisor for International Alert, a non-governmental organization dedicated to peacebuilding, I work extensively with partners in the post-Soviet region. Over the past few weeks, I have seen how these partners, former colleagues and friends have been questioning the efficacy of the “European democratic values” that they have been invoking in their work over the past decades.

Some countries in Eurasia have put tremendous effort into promoting European democratic standards. An important component of democratic systems traditionally has been the ability to defend the rights and interests of minority groups from encroachment by the majority. The recent experience in Catalonia has clouded public perceptions in Eurasia of democracy’s value, thus heightening the challenges faced by those who are trying to bring about change.

The Catalan example is also sure to be cited by authoritarian-minded governments in the region as they press ahead with efforts to restrict basic rights. It used to be that when blatant human rights abuses occurred in post-Soviet countries, even the governments that openly disdained European values still tended to worry about the potential for EU criticism. This concern could sometimes play a preventative role. But now, it seems, such states can worry less about criticism coming from Brussels.

“So how is Europe different from us, now?” one Caucasus partner asked me after watching images of police officers employing violent tactics to thwart the Catalan balloting. He quickly answered his own question; “If you dare use your right to choose, you’re liable to be beaten up here and there alike.”

Those I spoke to also began to draw parallels between their own governments’ tendency to interpret the law to their own advantage and what they perceived as the European governments doing the same.

Many Russian-language state media outlets have portrayed the events in Catalonia as the collapse of the “myth” of European democracy. Many bloggers from across the region have agreed with state media. Such coverage is causing an increasing number of residents of the region to wonder whether they should still aspire to European ideals of democracy.

It will not be easy to halt the erosion of faith in Western political values. My extensive experience in peacebuilding and humanitarian aid has shown me just how difficult the process of rebuilding trust can be. Peace can take years to build, but can be destroyed in an instant. Personally, I reject violence as a tool. It does not matter who uses it, to what aim, or what arguments are employed to justify it. Violence does not resolve conflicts, but merely exacerbates them.

Working for peace is significantly harder than working for conflict, but this work is crucial. We tend to take peace for granted, thereby making it yet more vulnerable and fragile. Mundane as this may sound, establishing and maintaining peace requires constant effort. Unfortunately, most of us tend to start thinking about peacebuilding only once conflict has erupted.

The lessons learned from working on conflict transformation in other parts of the world, such as the need for all civil society groups to engage in active dialogue, can easily be applied to conflicts within the European Union, including Catalonia.

But successful examples of peaceful solutions in Europe also need to be highlighted and praised. The Scottish independence referendum in 2014, for example, is a case in point. Many in the post-Soviet region were watching events in Scotland carefully, and some believed that troops could be deployed. They based this on their own experience of living in a situation of conflict for many years. In the event, both the electoral campaign and the results served to bring about a more positive perception of Europe in regions of conflict. This, in turn, helped to strengthen our position and moral grounds to work in such regions – at least, until the Brexit vote.

Right now, there is still shock and confusion following the referendum in Catalonia. Hopefully, this will give way to a desire to pause, reflect, and establish a process of dialogue.

The crisis in Catalonia might be a regional issue, but Europe needs to know that other parts of the world are watching developments closely. Europe’s failure to resolve the Catalan issue democratically could potentially help legitimize the use of violent methods to resolve disputes elsewhere.

Larissa Sotieva is a Senior Adviser for Eurasia at the peacebuilding organization International Alert.