Some women say flowers miss the point about women’s rights — especially in a region plagued by violence against women. 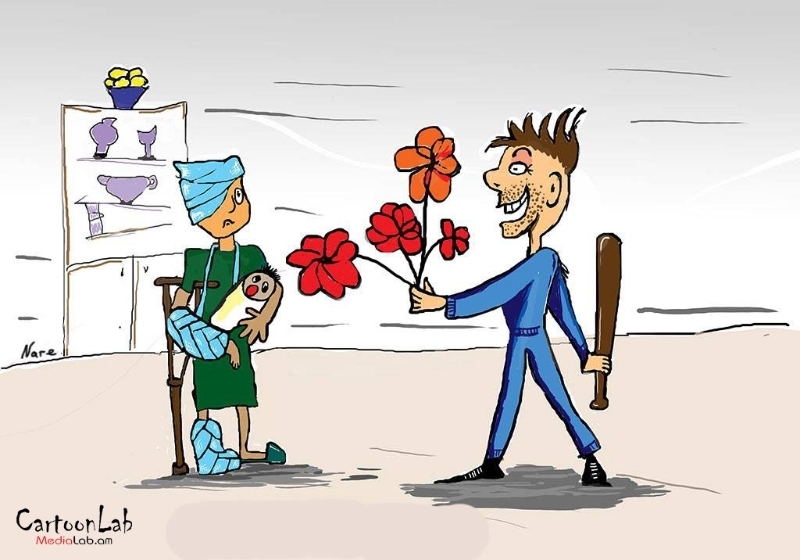 As elsewhere in the Caucasus, flower-giving for International Women's Day in Armenia contrasts starkly with the widespread problem of domestic violence. (http://www.medialab.am/gallery/cartoon_lab/id/5108)

In the South Caucasus, International Women’s Day is still largely about men offering flowers, candies and compliments to their mothers, wives and significant female others. But many women in the region are now saying that they want “rights, not flowers.”

Throughout the post-Soviet part of the world, March 8 has long ranked as a bit of a Soviet Valentine’s Day. In keeping with that tradition, Russia’s Vladimir Putin this year panegyrized women’s beauty and grace, and threw in a poem for good measure. “Woman is with us when we are born; woman is with us in our final hour; woman is the flag we fight for,” the Kremlin boss rhapsodized, borrowing lines by the 19th-century Russian symbolist poet Konstantin Balmont.

Caucasus leaders avoided poetry, but their governments did have other offerings.

In Armenia, female arrivals at the Yerevan airport received flowers, courtesy of the Armenian capital’s authorities.  Meanwhile, in Yerevan’s central square, Armenian Sports Minister Hrachya Rostomian whirled about with a group of cyclists, doling out both flowers and greetings to women.

Next-door, in Azerbaijan’s capital, Baku, the city’s formidable traffic police gave bouquets to female drivers, students held congratulatory flash mobs with heart-shaped balloons and flowers, and magazines dispensed advice on what sort of present (Hint, it has to do with flowers and candies) a woman would appreciate to mark the day.

Some enthusiasts chose to give flowers to Baku’s female street-cleaners. Azerbaijan’s most powerful woman, First Lady and newly named First Vice-President Mehriban Aliyeva received greetings, including from the ever poetic Putin: “In all times, women were the protector of the family hearth . . . they personified love, loyalty, spiritual warmth and hope,” he wrote.

Some women in the Caucasus are very much open to praise and presents on March 8, but others say that these offerings miss the point about women’s rights; especially in a region plagued by violence against women.

“An Armenian woman has to have a son, a husband; she has to take care of the family, keep the lantern lit and the hearth warm… otherwise, we are barren, immoral or old maids,” a small group of rights-activists read out as they marched through Yerevan, making stops at the headquarters of such pillars of male power as the army, the government and the Armenian Orthodox Church.

Throughout the region, activists blame socially constructed gender roles for violence against women and sex-selective abortions. In Armenia, police recorded four murders of women and 544 cases of domestic violence between 2015 and 2016.

Neighboring Georgia fared even worse. In 2014, the nation was rocked by a spate of femicide, with at least 26 women killed; in most cases, by their male partners. The murders touched off a series of protests, calling for tougher punishment and a more effective response to domestic violence.

In a move hailed by women’s rights activists, the Georgian government earlier this year adopted a package of anti-domestic violence laws that criminalized stalking, made it easier to issue restraining orders and banned perpetrators of domestic violence from owning a firearm.

The government also has an eye to more symbolic gestures. To mark March 8, Georgia’s National Parliamentary Library opened a room devoted to women’s studies, which appears to be the first such government-housed collection in the Caucasus.

Holding edgy posters such as “Pussy Liberalization” and “Viva la Vulva,” the Independent Group of Feminists, a local coalition, and sympathizers on March 8 marched down the central avenue in the Georgian capital, Tbilisi to demand equality for women. Speakers took particular aim at the fact that only 23 members of Georgia’s 150-member parliament are women. “Today, Georgian politics is run by men . . .” they stated, as they staged a performance that portrayed women held back by a make-shift glass ceiling.

If there was one category of Georgian women fully happy with flowers as the key symbol of the day, it was flower sellers. “I love March 8 because people buy lots of flowers on that day,” said Guliko Tskhakaia, who runs a flower stand near a Tbilisi cemetery. “And, for once, I know they are not meant for dead people.”