Rhetoric from Baku, meanwhile, suggests that Azerbaijan is interested in pushing its advantage following the breather. 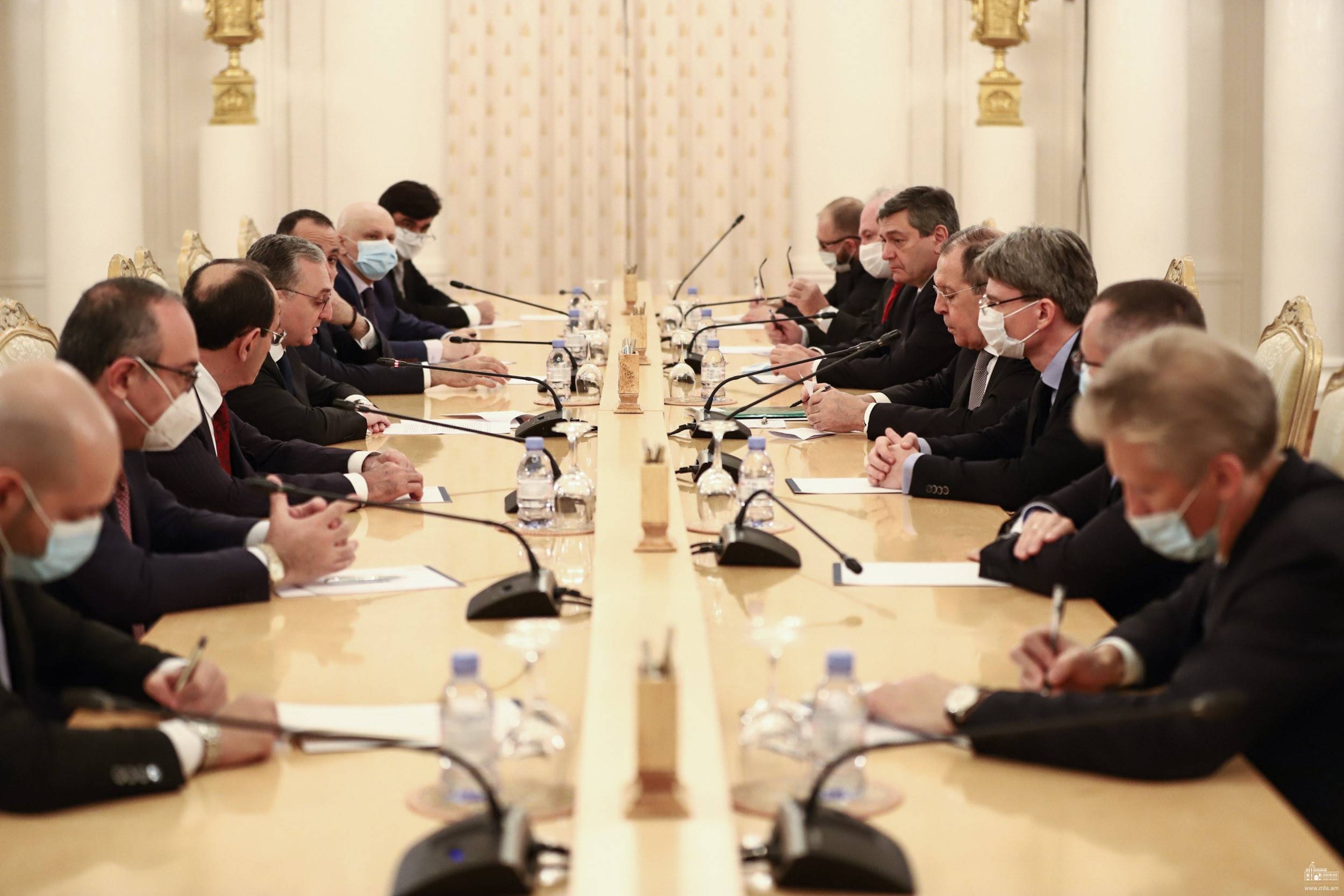 A delegation from Armenia meets with Russian diplomats in Moscow on October 12. (photo: Ministry of Foreign Affairs, Armenia)

A temporary ceasefire has slowed, but not stopped, fighting between Armenians and Azerbaijanis.

The “humanitarian ceasefire” was signed in the wee hours of the morning of October 10, and officially went into effect at noon that day. Since then, Armenian forces have struck a residential building in Azerbaijan’s second city, Ganja, killing 10 civilians. And fighting continued around the city of Hadrut in Nagorno-Karabakh.

Both sides also have reported continuing strikes from the other side on various parts of their respective territories. More than 48 hours after the ceasefire went into effect, the two sides had not managed to carry out the exchange of prisoners and dead bodies that was its ostensible purpose.

Nevertheless, the intensity of the fighting has by all accounts decreased in days since the ceasefire was signed. But this is likely only temporary.

Baku has used the ceasefire period to gather its strength in apparent preparation for further advances, said Michael Kofman, a military analyst and director of the Russia Studies program at the American think tank CNA Corporation.

“Armenia’s ground forces are being attritioned from the air,” in particular tanks, infantry fighting vehicles, logistics, and air defense units, Kofman told Eurasianet. “Most importantly, they can’t be effectively resupplied” due to their unfavorable geographical position, without a border to their main weapons supplier, Russia. “So they are retreating from some frontline positions.”

But, he added, “Azerbaijan has a tough road ahead for any gains if it wants to push into Nagorno-Karabakh. This is mountainous terrain, incredibly disadvantageous to any attacking force. What's been taken so far is really the lowest hanging fruit and the easiest place to conduct an offensive.”

While Azerbaijan is not making public its military casualties, it appeared to take heavy losses when it tried to advance in the first several days of the war, Kofman said. “It’s not possible to take terrain with drones alone, and the Azerbaijanis know this, which is why they are sitting back and making very small advances because they will begin taking substantial casualties if they push in,” he said.

Azerbaijan President Ilham Aliyev has in fact been signaling that he intends to push his advantage. In an October 12 interview with Turkish television station Haber Global he suggested there would be further advances.

“They [the Armenian armed forces] are being defeated, they are losing on the battlefield,” Aliyev said. “The victorious Azerbaijani Army achieves new military successes every day. Either a city or a village is liberated from occupation almost every day, or the territory of these villages is taken under control. Today I can say that several settlements are now fully under our control. We simply haven't entered these settlements yet because there is no need for that from a military point of view. But we will make further announcements after some time.”

While early indications were that Azerbaijan’s goal for the offensive were perhaps the capture of two nearly unpopulated districts outside Nagorno-Karabakh proper, it now is giving indications that it may be seeking to advance further.

“Because of the military advantage and the huge public enthusiasm for this campaign, Aliyev may be tempted to go further and move into Karabakh itself,” said Thomas de Waal, a senior fellow at the Carnegie Endowment for Peace and a longtime Caucasus analyst.

“I think this would be really catastrophic, both on a humanitarian level and politically as well – it would kill any chance of negotiations and provoke a desperate Armenian response, which we haven’t seen yet,” de Waal told Eurasianet. “It would be a horrible scenario. But he may be seriously considering it.”

Azerbaijan’s calculations are taking place amid a continued contest between Turkey and Russia, both of whom are trying to shape the conflict to their own ends.

The fact that Russia brokered the ceasefire seemed to serve as evidence of Moscow’s continuing hegemony in the region, in spite of its relatively hands-off approach to the current outbreak of fighting.

So, too, did the fact that Armenia and Azerbaijan confirmed as part of the ceasefire agreement that the current negotiating format would remain in place. That was a vote of confidence for the Minsk Group, the body led by France, Russia, and the United States, which has been mediating negotiations between Armenians and Azerbaijanis since the early 1990s.

Azerbaijan has been pushing for its main ally Turkey to play a larger role in the negotiations, and the agreement seemed to pour cold water on any such attempt.

But all of those conclusions now are being looked at the other way around: since the ceasefire is being observed so spottily by both sides, it seems to be a demonstration of Russia’s waning influence in the region.

Russia, along with most other international actors, has been urging the combatants to adhere to the ceasefire.

“I think that our long overnight together, which resulted in agreeing to a very important document, will not end up in vain and that we can still turn around the situation on the ground as soon as possible,” Russian Foreign Minister Sergey Lavrov said on October 12, after a meeting with his Armenian counterpart Zohrab Mnatsakanyan. Lavrov also called on the two sides “not to delay” political negotiations over a resolution of the conflict.

Turkish officials, meanwhile, have been treating the notion of the ceasefire somewhat disdainfully. Turkish Defense Minister Hukusi Akar, following a conversation with his Russian counterpart Sergey Shoigu, blamed only Armenia for the ceasefire violations, called on Armenia to unilaterally withdraw its forces from Azerbaijani territory, and said that “Azerbaijan cannot wait another 30 years for a solution.”

(It must have been a testy call: the Russian Defense Ministry later said that Shoigu had expressed to Akar his “particular alarm over the information received about the deployment of fighters from terrorist groups from the Middle East into the Nagorno-Karabakh conflict zone.” It was a reference to the widely reported presence of Syrian mercenaries, hired and transported by Turkey, to fight on Azerbaijan’s side.)

And Aliyev said in his Haber Global interview that Turkey should become a co-chair of the Minsk Group.

"Turkey is also a member of the Minsk Group, why shouldn't it be among the co-chairs? Even if many Western countries do not want to accept it, Turkey's word is big, it's fully independent," he said.

On the signing of the ceasefire agreement, “Russia seemed to 'win' a negation of any change to the format, which has been read as declining to elevate Turkey's role,” Laurence Broers, Caucasus program director at Conciliation Resources, told Eurasianet. “Russia thus seems to have the diplomatic leverage as a status quo stakeholder in the mediation process, especially since its position is essentially backed up actively by France and passively by the U.S.”

“But it is Turkey that has the military leverage on the ground as a status quo challenger,” Broers continued. “Turkey hasn't been given a new deal or stake in the process, which, as [Russian foreign policy analyst] Maxim Suchkov argues, is [Turkish President Recep Tayyip] Erdogan's goal. Moreover, can Ankara really rein in Baku if the latter feels that significant military success is within reach?”

The fighting is already by far the bloodiest since the war between the two sides in the early 1990s. Armenia has reported 542 soldiers killed since fighting broke out on September 27. Azerbaijan has not reported military casualty numbers. The Armenian side has reported at least 25 civilians killed and Azerbaijan, 41.