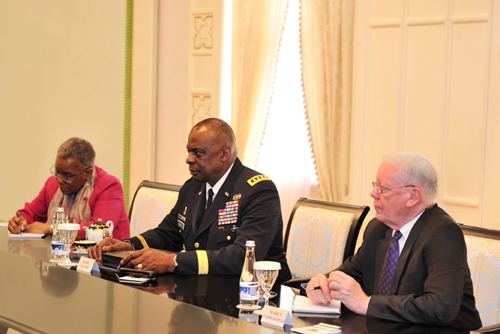 General Lloyd Austin and other U.S. officials in Tashkent for meetings with President Islam Karimov on military cooperation. (photo: president.uz)

General Lloyd Austin, the commander of U.S. Central Command, visited Tashkent on July 27 and met with President Islam Karimov and other officials. Uzbekistan's press release on the event said that Afghanistan was the topic of conversation, among other issues of regional security. RIA Novosti, citing "a source close to the negotiations," said the talks focused on the delivery of over 300 armored vehicles that Washington has promised. CENTCOM does not appear to have commented on the visit at all.

All that is fairly routine, and the talks also likely dealt with the possibility of further U.S. military aid that officials in Washington have hinted at. Meanwhile, Russia also recently ratified a deal under which Moscow would write off $900 billion in Uzbekistan's debt in order to open up new lines of credit for military purchases.

Austin last visited Tashkent a year ago, and it's worth recalling that much of the analysis about that event were completely wrong: the UzMetronom site suggested that the two sides were discussing a billion-dollar deal to put a U.S. military base in Uzbekistan. This blog saw the visit in the context of U.S. officials talking about rebalancing the relationship with Uzbekistan to decrease the emphasis on military cooperation. And Navbahor Imamova, the best reporter covering U.S.-Uzbekistan relations, said the visit was "purely maintenance." Months later, of course, Washington announced the biggest American military deal ever in Central Asia, the handover of the 300-plus MRAPs.

UzMetronom, undeterred, this time has suggested that discussions about a base may still be underway. The Bug Pit says: who knows.