Central Asia and Afghanistan: Enemies at the gate?

The Taliban has assured the region’s governments that it has no designs on them, but can it keep more hostile groups in check? 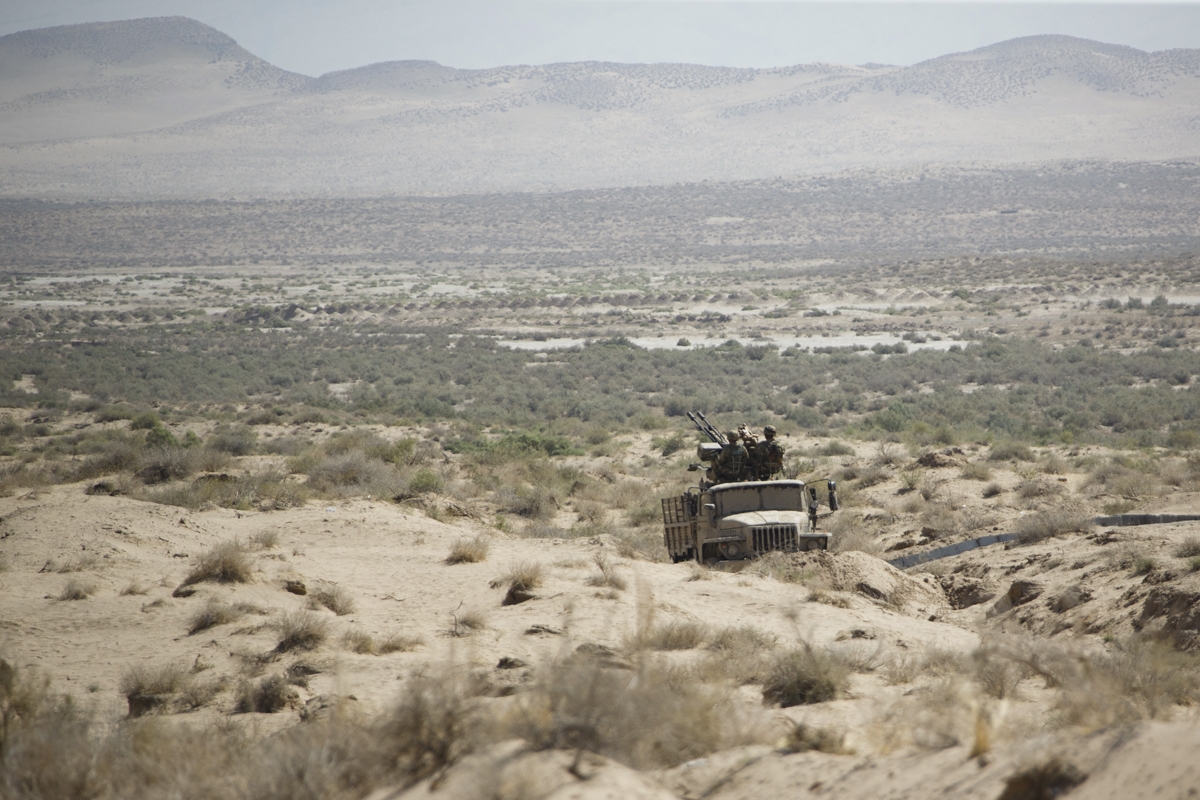 The Russian and Uzbek militaries drilled together last week near Termez on the Uzbek-Afghan border. (Russian Defense Ministry)

A hot summer has seen the Taliban blaze a trail of violence through Afghanistan and strengthen its bid for full control after the United States has abandoned the country at speed. The group’s successes have been especially notable in the north, once a stronghold for anti-Taliban forces with close relationships with the Central Asian governments over the border.

With the Taliban trying to project a new image abroad, Eurasianet turned to Afghanistan and Central Asia watchers to find out what Kabul’s shrinking control of the country means for the region.

How much of Afghanistan’s border with Central Asia is controlled by the Taliban?

It depends whom you ask. Russian Defense Minister Sergei Shoigu said on August 11 that the group was now in full control of Afghanistan’s borders with both Tajikistan and Uzbekistan. Reports from inside Afghanistan suggest that statement might be slightly premature, with government forces still holding Hairatan, the border crossing with Uzbekistan. Still, Kabul “could very well lose the crossing any day now,” according to Andrew Watkins, senior analyst on Afghanistan for the International Crisis Group.

The Taliban took control of the key Shir Khan Bandar crossing with Tajikistan back in June, forcing troops fighting for Kabul to seek temporary refuge across the border. Kabul has since lost all of that border, according to Dushanbe. The Taliban also control Torghundi, a dry port at Afghanistan’s frontier with Turkmenistan that is the first Afghan stop on a nascent railway linking the two countries.

Kabul’s ability to reassert itself over the north is complicated by its loss of a series of provincial capitals in recent days. Much store is now being put in the symbolic and strategic importance of Kabul holding Mazar-i-Sharif, the country’s fourth largest city, which is a short drive from the Uzbek border. Yet “even if the government holds Mazar, neighboring states must be able to deal with and engage the Taliban,” Watkins told Eurasianet.

Has the group changed?

If you are asking Afghan citizens fleeing northern towns overrun by the Taliban, the answer to this question might be “no.” Despite its pledges to accommodate the rights of women and ethnic minorities, civilian testimonies from these regions suggest the group is still violent and prone to imposing its strict interpretation of Islamic law wherever it can consolidate control.

But internationally, the Taliban has been on a charm offensive in recent years, establishing official contacts with China, Russia, Iran and two of the three Central Asian states that share a border with Afghanistan: Uzbekistan and Turkmenistan.

Kamoliddin Rabbimov, a Paris-based analyst of Islamic militant groups, said the Taliban is more sophisticated and more pragmatic than the largely isolationist group that conquered Kabul in 1996 and kept power until the U.S.-led 2001 invasion that several Central Asian countries provided logistical support for.

Nowadays, Taliban officials are more likely to visit the historic city as tourists and assure Uzbek officials of their commitment to deepening economic cooperation and regional peace, as they did in 2019. “The Taliban is prepared to strike agreements with everybody. It has let everyone know that it only needs power in Afghanistan,” Rabbimov told Eurasianet.

Are their Central Asian neighbors buying it?

In Central Asia, it is the group’s contacts with Turkmenistan that have been most notable. Ashgabat has a deepening economic stake in Afghanistan, which it views as an important transit for electricity projects and the long-stalled TAPI gas pipeline linking Turkmenistan's gas fields to major markets in India and Pakistan.

This burgeoning economic relationship was celebrated in January with ceremonies marking the latest extension of the cross-border railway down to the Afghan city of Andkhoy and a new power line from Kerki in Turkmenistan to Sheberghan in Afghanistan, both of which were watched via video-link by Turkmen President Gurbanguli Berdymukhamedov and his Afghan counterpart Ashraf Ghani.

Since then, however, it has been the Taliban that Turkmen officials have met with – on three occasions and counting – with settlements covered by these projects falling under the group’s sway. RFE/RL reported on August 12 that representatives from the governments of Russia, Turkmenistan and Uzbekistan met with Taliban negotiators in Qatar as recently as this week.

Tajikistan is far less convinced of the Taliban’s usefulness.

At the August 6 summit of Central Asian leaders in Turkmenistan’s Awaza resort town, President Emomali Rahmon spoke with regret of their dominance along the border and denounced a buildup of “terrorist groups” in the areas that had fallen to the Taliban.

Fighting for these groups include militants from former Soviet states and China, “extremists who are well-trained in sabotage, terrorism and propaganda activities and have far-reaching plans concerning our region,” the Associated Press quoted Rahmon as claiming.

Is this where the potential for so-called spillover is?

Yes, although the likelihood of spillover has sometimes been exaggerated by leaders in the region – including Rahmon – in the past.

Jennifer Murtazashvili of the University of Pittsburgh noted that Ansarullah Jamaat and groups devolved from the Islamic Movement of Uzbekistan, or IMU, are among those that have Central Asian fighters in their ranks and an enduring interest in the countries to the north.

A breakdown in security at the border will also make it easier for radicalized citizens of the Central Asian states to travel in and out of Afghanistan, Murtazashvili told Eurasianet.

“We must be careful not to exaggerate the number of such fighters travelling [from] Central Asia to Afghanistan, but we have seen from the past decade in Syria and Iraq that it takes just a few individuals to cause trouble for regimes back home,” Murtazashvili said.

An Afghan government official in charge of Afghanistan’s Darwaz district, Kadyr Safa, told RFE/RL that Kabul had received information in spring that nine Tajik nationals had crossed the border to join Ansarullah. “In the winter and spring, many new fighters came from Tajikistan,” Safa said. The same July 27 report cited anonymous sources as saying that Ansarullah de facto controls part of Tajikistan’s border with Afghanistan.

Watkins of ICG noted that while there are many unanswered questions about the Taliban’s relationships with other militants in the north, “there is reason to believe these groups co-exist with and enjoy some sanctuary with the Taliban. At the same time, the Taliban is likely letting its neighbors know, behind closed doors, that (the groups) are a problem they can control.”

Could Central Asia experience a refugee crisis if fighting continues?

Last month, an official from Tajikistan’s emergencies committee made headlines when he told a press briefing that his country was readying to take in up to 100,000 refugees from Afghanistan if required.

That pledge was shot down just days later by Foreign Minister Sirojiddin Muhriddin, who said Dushanbe would not put numbers on the refugees it could take in, especially given coronavirus concerns.

But the most recent round of fighting in the north, which has displaced tens of thousands, none of whom have fled into the Central Asian countries, suggests that these concerns are overblown.

Murtazashvili argued that massive displacement has long been a trend in the north, but “Afghans know what places are open and welcoming to them. Central Asia has never been one of those places.”

Heavy fighting in and around Mazar could change that though, as could a major population displacement in Badakhshan, a northeastern outlier province that borders Tajikistan and is more remote from what Murtazashvili describes as the “ring road” of Afghan population centers that the displaced often flee to.

Local reports from Termez in Uzbekistan in July suggested that Tashkent was setting up thousands of tents in order to accommodate a potential refugee influx, although officials in Tashkent later denied that this was ever the case.

Reported U.S. requests to states in the region to offer safe haven to Afghan civilians who provided support to Washington’s war effort appear to have fallen on deaf ears, meanwhile.

Ismatilla Ergashev, Uzbek President Shavkat Mirziyoyev's special envoy on Afghanistan, knocked back the suggestion on July 22, suggesting that Tashkent lacked any legal basis to host the refugees. Tajikistan’s Muhriddin said July 27 that Tajikistan was not considering the possibility.

Where is Russia in all of this?

Moscow is busy holding drills and loudly decrying Washington’s pullout as a botched job. Since the end of July, Russia has participated in no fewer than three joint military exercises: with Beijing in China’s western region of Ningxia; with Tashkent at Uzbekistan’s Termez training ground; and with both Tashkent and Dushanbe near Tajikistan’s border with Afghanistan.

The trilateral drills that concluded on August 12 at Tajikistan’s Kharb Maidon training ground included 2,500 troops and simulated an air and land response to an incursion from the south by militants.

Russian military officials said that the Islamic State group was among the imagined targets.

The Kremlin has given a major boost to the Taliban’s international standing by receiving the group for high-level talks. After the Taliban’s most recent visit to Moscow last month, Russian foreign minister Sergei Lavrov was fulsome in his praise of the militants.

Blaming Kabul for stalling at talks, the veteran diplomat hailed the Taliban’s dual pledges to leave Central Asia alone and peg back the Islamic State in Afghanistan. Russian media carrying Lavrov’s sunny quotes were forced to note in accordance with national law that both the Taliban and ISIS were “terrorist organizations banned in Russia.”

Russia’s ties to the Taliban may go further. The U.S. military has in the past accused Moscow of bolstering the Taliban’s war effort with clandestine supplies of arms and of inflating the threat posed by the Islamic State in Afghanistan in order to lend legitimacy to the Taliban’s reemergence. Moscow has refuted these accusations. But the Kremlin has often given the impression that it would be happy with any outcome that made Washington’s two-decade war look even more of a failure.