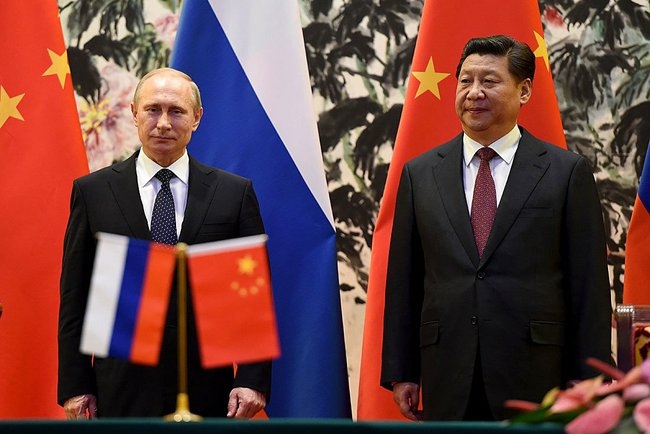 There is a good chance that economic jockeying between China and Russia in Central Asia will intensify in the coming months. For Russia, Chinese economic expansion could put a crimp in President Vladimir Putin’s grand plan for the Eurasian Economic Union.

Putin has turned to China in recent months, counting on Beijing to pick up a good portion of the trade slack created by the rapid deterioration of economic and political relations between Russia and the West. Beijing for the most part has obliged Putin, especially when it comes to energy imports. But the simmering economic rivalry in Central Asia could create a quandary for bilateral relations.

Chinese President Xi Jinping elaborated on Beijing’s expansion plans, dubbed the Silk Road Economic Belt initiative, prior to this year’s Asia Pacific Economic Cooperation (APEC) forum, which concluded November 12. The plan calls for China to flood Central Asia with tens of billions of dollars in investment with the aim of opening up regional trade. Specifically, Xi announced the creation of a $40-billion fund to develop infrastructure in neighboring countries, including the Central Asian states beyond China’s westernmost Xinjiang Province.

An interactive map published on Chinese state media outlet Xinhua shows Central Asia at the core of the proposed Silk Road belt, which beats a path from the Khorgos economic zone on the Chinese-Kazakhstani border, through Kyrgyzstan and Tajikistan, before snaking into Uzbekistan and Iran. Turkmenistan, already linked to China by a web of pipelines, would not have a hub on the main route.

The fund’s aim is to "break the bottleneck in Asian connectivity by building a financing platform," Xi told journalists in Beijing on November 8. Such development is badly needed in Central Asia, where decaying Soviet-era infrastructure has hampered trade among Central Asian states, and beyond.

No matter the need, Russia, which is busy promoting a more protectionist economic solution for the region in the form of the Eurasian Economic Union (EEU), may not share Beijing’s enthusiasm for the Silk Road initiative.

At the APEC gathering, Xi and Putin were all smiles as they greeted each other, dressed in summit attire that was likened by journalists and observers to Star Trek-style uniforms. Yet, the public bonhomie concealed a “complicated relationship,” according to Bobo Lo, an associate fellow at the Russia and Eurasia Program at Chatham House.

The Silk Road Economic Belt is a case in point, explained Lo. The “mega project”, much like the original Silk Road, could eventually encompass several routes and benefit Russia’s own infrastructurally challenged east, he noted. But it might well dilute Russian influence in its traditional backyard of Central Asia.

“If you are sitting in Moscow, you are hoping that Russia will be the main trunk line [of the belt], but it seems likely it will be more of an offshoot,” said Lo. “[The belt’s] main thrust will be through Central and South Asia.”

Chinese leaders are intent on linking their Silk Road initiative to a broader project, the Free Trade Area of the Asia Pacific (FTAAP), which they touted during the APEC gathering.

FTAAP and the Silk Road Economic Belt, along with a similar strategic plan called the 21st Century Maritime Silk Road, are pro-trade in the broadest sense, seeking to break “all sorts of shackles in the wider Asia-Pacific region to usher in a new round of higher level, deeper level of opening up,” according to Li Lifan, an associate research professor at the Shanghai Academy of Social Sciences. Under the Chinese vision, its “grand idea” would seek to “absorb the Eurasian economic integration [project] led by Russia,” Li told EurasiaNet.org via email.

In contrast to the expansive Chinese vision for Eurasia, early evidence suggests a Russia-led union, with its tight border controls and levied tariffs, could end up stifling cross-border trade among members and non-members. Under such conditions, Central Asian states could experience a decline in their current level of trade with China. The existing Kremlin-dominated Customs Union is set to evolve into the Eurasian Economic Union on January 1.

At least since the build-up to the 2013 summit of the Shanghai Cooperation Organization (SCO), a Central Asia-focused security organization of which China and Russia are both members, Beijing has been very public about wielding its economic might in the region. Back then, Xi jetted across the region speaking of the belt for the first time as he signed deals worth tens of billions of dollars, most notably energy contracts with Turkmenistan and Kazakhstan.

Ever since, discussions of how to turn the belt into a reality have been uncomfortable. Moscow is reportedly steadfastly opposed to the idea of turning the SCO – which also comprises all four Central Asian countries positioned along the proposed belt’s route – into an economic organization.

Uzbekistan has refused to join the Customs Union, which also excludes China. But the Kremlin expects Kyrgyzstan to join at the beginning of next year and Tajikistan to follow. Currently, the bloc’s only members other than Russia are Kazakhstan and Belarus.

For countries that have already been on the receiving end of Chinese largesse, the prospect of deeper economic integration with Russia may begin to seem like a limitation. During a November 7 meeting in Beijing ahead of the APEC summit, Xi and Tajik President Emomali Rahmon signed agreements securing Chinese credit for a railway to connect Tajikistan’s north and south, a new power plant and local agricultural projects. They also agreed on investments for the state-owned aluminium smelter Talco, an entity that once enjoyed close ties with the Russian conglomerate RusAl. Bilateral trade for the first eight months of this year increased by 40 percent compared with the same period last year, reaching $1.5 billion.

“If we compare something like the Customs Union to the Silk Road Economic Belt, then of course the belt is preferable for Tajikistan,” Muzaffar Olimov, director of the Sharq analytical center in Dushanbe, told EurasiaNet.org in a telephone interview. Tajikistan “has not decided” if it wants to join the economic bloc [the EEU], he added.