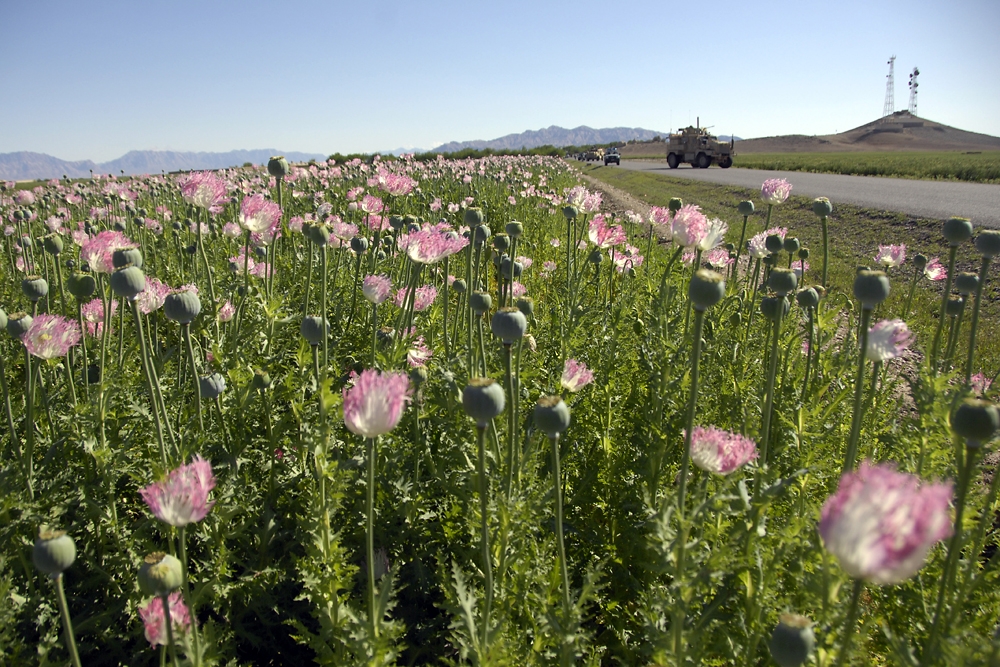 Russia is dragging its feet on cooperation with the US to stem drug trafficking from Afghanistan, despite its alarming addiction rates. (Photo: Petty Officer 1st Class Monica R. Nelson/US Navy)

Narcotics use is wreaking havoc in Russia, responsible for 30,000 annual deaths and 200 new HIV infections every day. But Vladimir Putin’s Kremlin is letting knee-jerk hostility toward the United States cloud its response to the drug-trafficking crisis. Not only is Russia reluctant to go along with a Washington-designed anti-trafficking blueprint, Moscow is believed to be leaning on Central Asian states not to cooperate either.

Back in July 2011, Washington unveiled its so-called Central Asia Counter-narcotics Initiative (CACI) to battle drug traffickers throughout the region and reduce the volume of drugs being exported out of Afghanistan. The plan would specifically promote the sharing of information, while striving to build up the capacity of indigenous Central Asian anti-drug agencies. For the past 18 months the initiative hasn’t been able to gain traction, although American officials insist the offer is still on the table and no country has refused to participate outright.

Moscow quickly frowned on the plan, which would see the US Drug Enforcement Agency training counter-narcotics squads in all five Central Asian states. Analysts say the Kremlin has bullied Central Asian leaders into keeping their distance from the plan, thereby buying time for Russian officials to develop an alternative.

The Kremlin’s obstinacy appears inimical to Russia’s best interests. For drugs transiting north from Afghanistan – the world’s largest producer of opium and heroin – via Tajikistan, Kyrgyzstan, and other Central Asian states, Russia remains the primary market. An estimated 90 percent of Russia’s roughly 8.8 million drug addicts are hooked on Afghan narcotics, according to the country’s anti-drug czar Viktor Ivanov. Heroin, Ivanov has said, is “as easy to buy as a Snickers” chocolate bar in Russia.

Even though the addiction problem is a major element fueling Russia’s unprecedented demographic crisis, Moscow is unlikely to shift its position on participation in the US anti-narcotics plan, says Pavel Felgenhauer, a Moscow-based journalist and Kremlin-watcher. Such is the “souring atmosphere” toward Washington under the Putin administration, that “even low and mid-level cooperation on drug control and law enforcement is not going to be easy,” Felgenhauer said. Russian officials understand Putin’s antagonistic rhetoric as a signal not to engage with their American counterparts, he added.

Putin’s attachment to a Cold War mentality means trouble for Central Asia, where heroin addiction is also rising and narcotics trafficking represents a “destabilizing force” for fragile states like Kyrgyzstan, says Alexander Zelichenko, a former Kyrgyz police colonel and now director of the Bishkek-based Central Asian Center on Drug Policy think-tank. Noting that both Russia and America fund UN Office on Drugs and Crime (UNODC) programs, Zelichenko said bilateral cooperation between any two governments, regardless of where it is initiated, “will always be the deepest and most effective way to combat the narcotics business.”

In late January, hopes for American-Russian collaboration on counter-narcotics programs took a significant step backward when Russian Premier Dmitry Medvedev signed an order cancelling an agreement that had been in place since 2002. Under that pact, Washington had been assisting Russian drug control and law enforcement programs.

A State Department official says Moscow’s withdrawal from the bilateral treaty will have no bearing on the CACI program. “The bilateral agreement in question is an assistance agreement and its termination has no impact on bilateral or multilateral law enforcement cooperation,” the official told EurasiaNet.org by email. The State Department has earmarked $7 million to fund regional cooperation and counter-narcotics agencies in Kyrgyzstan, Kazakhstan, Tajikistan, Turkmenistan, and Uzbekistan in 2013, the spokesperson added, noting “the US and Russia share a strong interest in a stable, secure Central Asia.”

The CACI program has taken a beating in the Russian press, with some outlets portraying it as an after-thought designed more to ensure a lasting American footprint in Central Asia than to make substantive progress in reducing the flow of drugs out of Afghanistan and through the region. Citing the fact that US forces have been in Afghanistan for over 11 years, Russian media also have depicted the development of a US anti-drug plan only in 2011 as too little, too late.

Some Western experts also find fault with the US initiative. Svante Cornell of The Johns Hopkins University, for example, says the program is well intentioned, but weak-willed. The efforts emerged “late in the game, when the drug economy is already dominating Afghanistan and the region as a whole.” Cornell points to the figure earmarked for the CACI program initially – $4.2 million – as “totally inadequate to fight an overall trade that stretches into the dozens of billions of dollars.”

Cornell maintains that Washington’s anti-drug efforts require “broader diplomatic relations with the governments of these countries. The United States has made almost no indication of what its plans for the region are after 2014.” Without deeper and sustained bilateral ties with regional governments, “a poorly-funded drug program can’t stand on its own two legs,” he said.

Complicating Washington’s CACI challenges, the Central Asian response has been ambivalent, or even hostile, according to local media reports. Citing anonymous sources in the Kyrgyz government, a January 17 article in the Vechernii Bishkek newspaper claimed Kyrgyzstan “maintains more than a cold position” regarding the initiative, a position the paper claims is shared by Turkmenistan.

One thing that the CACI plan doesn’t seem to take enough into account is widespread official corruption in Central Asia. Russia, according to Zelichenko at the Central Asian Center on Drug Policy, has exploited the information-sharing provision in the CACI plan to engage in fear-mongering among Central Asian officials. “Russia started to politicize it, expressing concerns about interference in domestic affairs, and the possibility of sensitive information leaks,” Zelichenko said.

“What sensitive information could possibly be leaked?” he continued. “Information about the involvement of men in uniform in the drug trade? That is the only information that I can think would be sensitive in this context.”