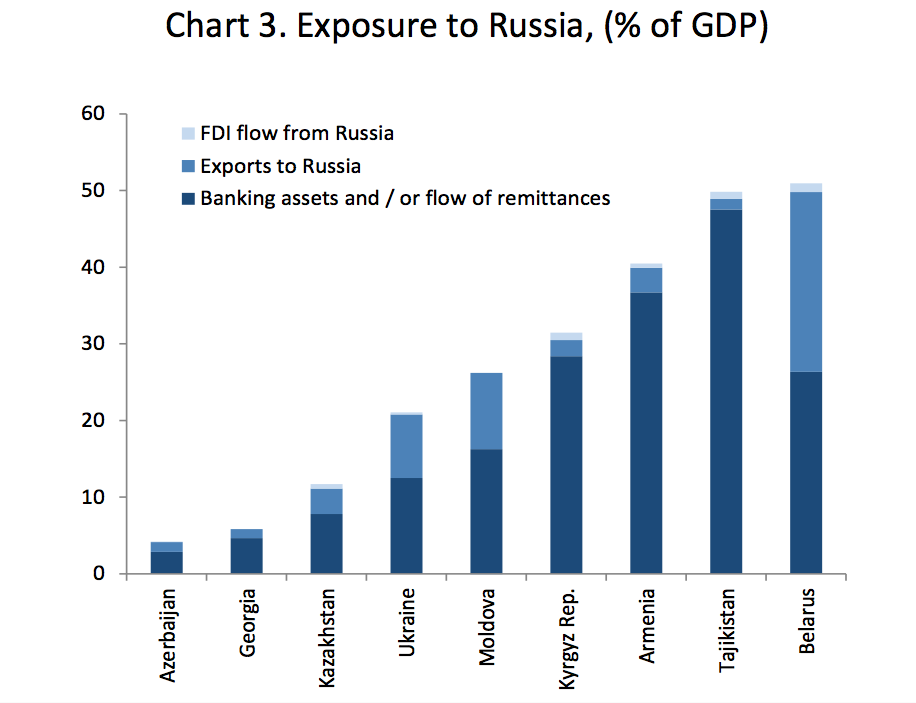 From the EBRD report: “The chart shows that Belarus, Armenia and Tajikistan (the latter predominantly through remittance flows) have the highest overall economic exposure to Russia. Such exposures are also significant for the Kyrgyz Republic, Moldova and Ukraine.”

As Russia’s economy goes, Central Asia’s follows. So it is no surprise that the current downward drift in Russia will hurt the region, potentially for years to come. Remittance-dependent countries like Kyrgyzstan and Tajikistan should be especially worried, the European Bank for Reconstruction and Development, a multilateral lender, says in a new report.

In its September regional assessment, the EBRD forecasts growth in Russia will come to a “standstill” in the coming months. Already pronounced, Russia’s economic slump is being exacerbated by the war in Ukraine and Western sanctions. The EBRD said Central Asia, and formerly communist countries more broadly, can expect “significant spill-over effects.”

New sanctions by the EU and U.S., which will dampen growth in Russia, “will negatively affect growth in the Central Asian countries.”

As in 2009, during the financial crisis, migrants and their dependents back home will be the first to feel the pain. Remittances from Russia to Central Asia fell in the first quarter of 2014 compared with the previous year, “for the first time since 2009, primarily due to the slowdown in Russia,” the EBRD said. “Particularly vulnerable are [the] Kyrgyz Republic and Tajikistan, where even a small drop in remittances from Russia is substantive, as remittances make up 29 percent and 49 percent of GDP respectively.”

A fall in remittances “may significantly dampen consumer demand in lower-income countries in the region.”

The depreciation of the ruble (by 20 percent against the dollar over the last 12 months) has put downward pressure on post-Soviet currencies, especially the Kazakh tenge and the Kyrgyz som. Though these currencies have been “broadly stable in recent months,” the ruble has plumbed new lows in the last two weeks, again putting them under pressure. (The som depends on ruble inflows; the tenge is partially pegged to the ruble.)

All this could have a political impact, of course. The slowdown in Kyrgyzstan following the 2009 financial crisis contributed to unrest culminating in the 2010 overthrow of the country’s venal ruling clan, the Bakiyevs. And it highlights once again the risk of depending on migrants – and the good fortunes of Russia – rather than creating jobs at home.

Central Asia may be able to offset some of these negative effects by increasing food exports to Russia, after Moscow banned many agricultural products from most Western countries in response to sanctions. The EBRD singles out Kazakhstan, Central Asia’s largest economy, for the most potential to benefit. While Kazakh officials are eager to help fill Russia’s food gaps, if exports go up at the expense of local consumers, Kazakhstan could see a spike in inflation. Overall, in the first six months this year Russian-Kazakh trade fell over 24 percent.

Looking ahead, everything depends on Russia and Ukraine, which makes any forecast “exceptionally uncertain.” But certainly this year’s events have hurt investor confidence and economic activity is “likely to remain weak” in Russia, which the EBRD predicts will enter recession next year.

As former Soviet countries look warily at Russia’s apparent meddling in eastern Ukraine, the crisis is having one other worrying long-term effect, the EBRD warns, by encouraging increases in military spending: “Permanently higher military spending in the transition region over the medium term, in response to the renewed geopolitical risks, could erode the peace dividend from the dissolution of the Soviet Union.”