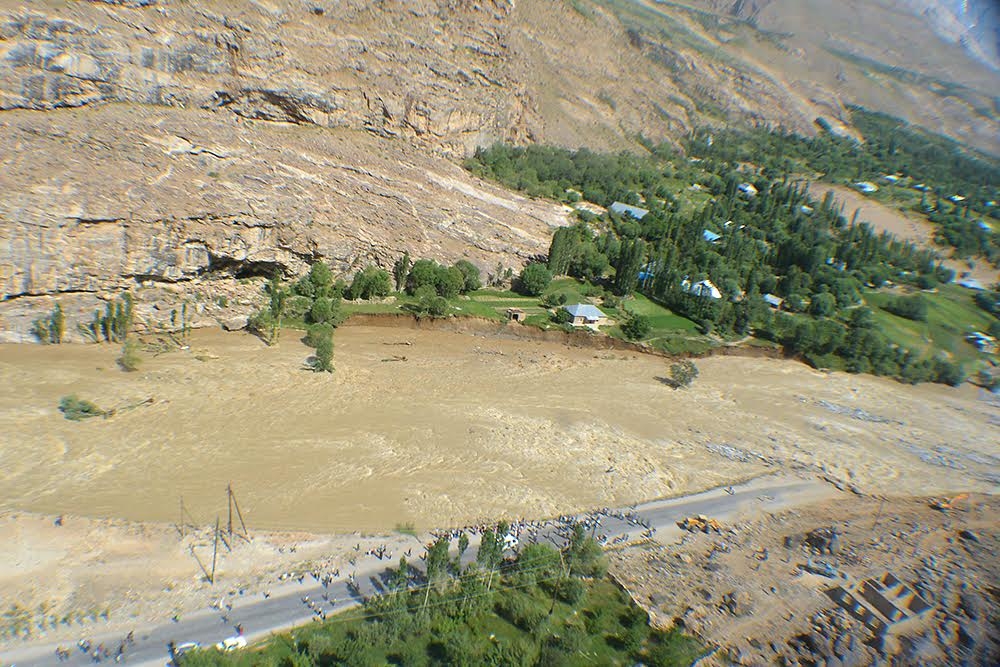 Near the towns of Barsem and Kolkhozod, villagers in Tajikistan’s Gorno-Badakhshan Autonomous Region gather at the edge of the swollen Gund River to watch floodwaters cut off roads and wash away homes on July 17. Abnormally high temperatures in Tajikistan are causing rapid snow and glacier melts, triggering mudflows, landslides and flash floods. (Photo: UN REACT)

Floods across Central Asia over this past week are highlighting the perils of failing to adopt robust water-management measures and put adequate early-warning systems in place.

Tajikistan has been the worst hit, with abnormally high temperatures causing rapid snow and glacier melts. The country is 93 percent covered by high mountains, making it particularly vulnerable to landslides and flash floods. Dozens of homes have been destroyed and at least a dozen people killed.

The situation has been particularly acute in the eastern Gorno-Badakhshan Autonomous Region, where challenging geography complicates any rescue operation. On July 16, a mudslide there crashed into the Gund River, which runs by the village of Barsem, resulting in the build-up of an artificial lake that flooded the area and stranded 1,100 residents.

The government is unable to single-handedly tackle emergency situations and relies heavily in the Pamirs on the Aga Khan Development Network (AKDN), with which it has often strained relations.

“The vulnerable population of the affected site was evacuated through government and Aga Khan Development Network helicopters – the only means of access during the first two days – to Khorog and transported to the Manem village, where a shelter and tent camp was established,” said Idris Jonmamadov, spokesman for the AKDN’s emergency response center.

A United Nations Rapid Emergency Assessment and Coordination Team estimated that more than 80 percent of communities in the Gorno-Badakhshan Autonomous Region were left without power in the days following the flooding.

The long-term damage will be all but impossible to remedy without international assistance.

“In total, the country’s water, energy, transportation system and social infrastructure have, according to preliminary information, sustained damage worth around $100 million,” Tajikistan’s Foreign Ministry said in a statement appealing for help.

The initiative for developing an efficient and coherent disaster response mechanism has been led by international organizations, while government spending priorities have often focused elsewhere.

Tajik President Emomali Rahmon said on July 22 that all completely destroyed homes would be rebuilt by November and the families that lived in them given $1,500. Nothing was said about what could be done to avoid or minimize the impact of repeat events.

Also, with all critics of the government jailed or cowed into silence, there is no public debate about authorities’ emergency response.

Meanwhile, intense heat in Kyrgyzstan, another densely mountainous country, has also caused fast melting of glaciers and a rise in river levels.

Emergency officials said on July 20 that the banks of Sokh River overflowed in the southern Batken region, washing away rice and corn fields, and destroying flood defenses. Similar dispatches have been coming out of southern Kyrgyzstan, the country’s agricultural heartland, for several weeks.

Water levels have also been on the rise in the northern Chui region, posing a risk to homes, roads, bridges and communication lines. Alamedin, Ala-Archa, Ysyk-ata and Nooruz rivers are popular with local and foreign visitors alike and draw important tourist revenue, which prompted the authorities to issue warning notices to short-term visitors.

“It is recommended that … tourist groups not go to locations in close proximity to the banks of the aforementioned rivers and to be extremely careful,” the Emergency Services Ministry said in a statement.

The dangers inherent in mudslides and earthquakes do not only have humanitarian implications, but also threaten to stoke outright ecological disasters. Kyrgyzstan’s often poorly secured, Soviet-era radioactive tailings dumps lie beside rivers susceptible to overflowing. Officials worry about the consequences, but action to address the issue has been left wanting. Again, a combination of lassitude and cash shortages lies at the heart of the predicament.

Kazakhstan is not as mountainous as Tajikistan and Kyrgyzstan, but floods have struck there too. Still, superior resources have allowed for a far more comprehensive reaction.

Emergency officials said a moraine holding back the Bezymyannoye lake above the city of Almaty failed to hold, sending up to 30,000 square meters of water and debris plunging below in the early hours of July 23. Videos and photos posted online showed streets under muddy water and vehicles washed away by the water-borne debris.

Consequences might have been much worse but for a dike built in 2003, emergency services official Talgat Bekbolov told Tengri News.

“This year, the summer has been very hot. The anomalous temperatures have lasted for 10-12 days,” Bekbolov said, adding that freezing temperatures were only being registered at altitudes as high 4,800 meters. “This has had a strong effect on high-altitude glaciers and led to them melting.”

The government in Kazakhstan has learned the public relations value of having state representatives be seen overseeing such occurrences. Top officials, including Deputy Prime Minister Berdybek Saparbayev and Deputy Interior Minister Vladimir Bozhko travelled to the scene for a clearer understanding of events, the Emergency Services Committee said.

Almost 900 residents were evacuated from flood areas on the western edge of Almaty within hours.

Still, even Kazakhstan’s response has evinced shortcomings. Despite assurances by officials that SMS warnings had been sent to residents in affected neighborhoods, it appears many did not receive those messages in the early hours of the morning.

“Evidently, this is a matter of ill-information or lack of good faith by the (telephone) service operator staff on duty at that time,” Aubakirov was cited as saying by Tengri News. “The messages only went out later, when the company heads turned up.”