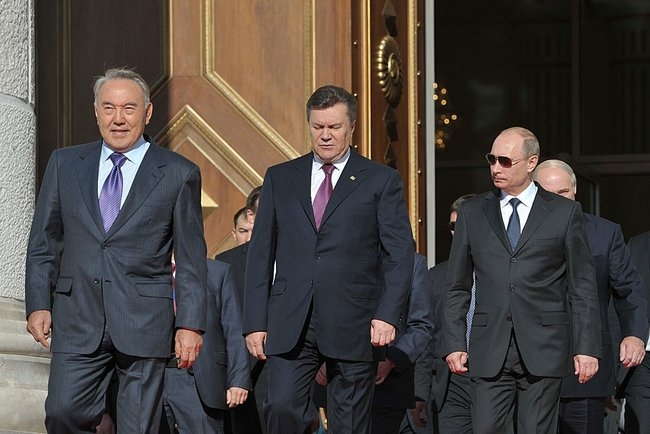 The Wonka wannabe is wondering: why don't these guys want to be my Oompa Loompas? (Photo: Russian Presidential Press Service)

Central Asian states are becoming entangled in a trade spat involving Russia and Ukraine. Ostensibly, the dispute’s origin can be traced to Russian concerns over the quality of Ukrainian chocolate. But Russia’s real aim, according to some observers, is enhancing the viability of the Kremlin-led Customs Union.

In late July, Russia took a bite out of Ukraine’s economy by banning sweets from a major confectioner. This week, Moscow sunk its teeth deeper into Kyiv, holding up Ukrainian goods crossing its border. The moves, which some Ukrainian politicians are calling the opening shots of a “trade war,” come just months before Kyiv plans to cement closer trade relations with the European Union. Such a development would mark a significant diplomatic setback for Russia, which has been working to bring Ukraine into its own trade bloc, known simply as the Customs Union. The group at present comprises Russia, Belarus and Kazakhstan.

Russia’s Federal Consumer Protection Service, Rospotrebnadzor, announced on July 29 a ban on chocolates and other sweets from Kyiv-based confectioner Roshen. Rospotrebnadzor chief Gennady Onishchenko said Roshen’s milk chocolate contains the carcinogen benzopyrene and noted problems with the candy’s “taste and smell.” Roshen protested, asking Rospotrebnadzor for documents listing specific violations. As of August 16, the company said it had not received any response.

Roshen, which exports its products to most former Soviet countries, as well as the United States and much of the European Union, is listed as the 18th largest confectioner in the world by the trade magazine Candy Industry, with 2012 sales of almost $1.3 billion.

On August 14, Russia’s customs service took the dispute further when it reportedly began stopping, unloading and checking consumer products crossing the border from Ukraine. The head of a Russian parliamentary committee for relations with former Soviet countries told Ekho Moskvy radio on August 15 that the Russian action was due to bureaucratic snags resulting from Ukraine’s non-membership in the Customs Union, which last year liberalized the movement of goods, services, labor and capital among the three countries. In Ukraine, politicians of all stripes describe Moscow’s move as an attempt to coerce Kyiv into joining the Customs Union.

Russia is Ukraine’s largest export market, and Kyiv’s economy was already hurting before the latest conflict. Ukraine’s export earnings fell by more than 11 percent in the second quarter of 2013, according to the Economist Intelligence Unit. The Federation of Employers of Ukraine, a lobby that claims to represent thousands of companies that account for almost 70 percent of GDP, warned that the recent stoppages could cost Ukrainian companies over $2 billion this year, slashing 1.5 percent off GDP.

The spat is not simply between Russia and Ukraine, however. Kazakhstan’s Health Ministry said it received an official request from Rospotrebnadzor on August 7 to ban Roshen products, Interfax-Kazakhstan reported, citing a Kazakh public health official. The ministry declined to answer EurasiaNet.org’s questions.

Kyrgyz officials also checked Roshen’s products, but announced on August 14 that they had not found any problems. “This [the inspection] was motivated by the Russian claim,” said a Health Ministry official, who insisted Kyrgyzstan was not acting under Russian pressure.

Officials in Tajikistan, begrudgingly dependent on Russia, also tested and found nothing wrong with the chocolate, Itar-Tass reported.

While impoverished Kyrgyzstan and Tajikistan are not yet members of the Russia-led trade bloc, much wealthier Kazakhstan is a co-founder and its involvement in the Ukraine spat could mark a significant development.

“If Russia bans the chocolate and the Kazakhs continue to import it, that might make for an interesting collision,” said Fyodor Lukyanov, the Moscow-based editor of Russia in Global Affairs. “Russia cannot any longer act alone now that it’s in this common market.They [Russia and Kazakhstan] will need to find a formal solution.”

At a small protest outside the Russian Consulate in Almaty earlier this month, activists tried to feed Russian diplomats Roshen chocolate and demanded Kazakhstan not join the “sanctions.” One of the organizers, Rasul Zhumaly, told EurasiaNet.org later that he had been protesting Russia’s “pressure” on Kazakhstan. “This decision was politically motivated from the very beginning. The aim was not as much to find harmful substances, but to spoil our relationship with other CIS partners,” he said.

Russian President Vladimir Putin has said he’d like the Customs Union to grow into a Eurasian club of former Soviet states modeled on the EU.

Two days before the chocolate ban, Putin traveled to Ukraine, where he made a last-ditch effort to persuade his counterpart, Viktor Yanukovich, to join Moscow’s trade bloc; Kyiv, meanwhile, hopes to sign an association agreement with the EU this November.

“Competition on the global markets is very fierce today. I am sure that most of you realize that only by joining forces can we be competitive and stand a chance of winning in this tough environment,” the Kremlin website quoted Putin as saying on July 27. Still, he apparently returned home empty-handed. On July 29, the ban was announced.

Ukraine is essential to the Customs Union project and its membership is “necessary for Russia to feel like a superpower,” Lukyanov told EurasiaNet.org. But Ukraine is divided and now looks set to move toward the EU. “The timing [of the chocolate ban] is very transparent. For Russia this is the final push, the final attempt to explain to Ukraine that if they sign a trade deal with the EU in November, the Russian market will start to close for them.”

Russian economic pressure in times of political disagreements with its neighbors is nothing new. Most famously, perhaps, Moscow pressured Kyiv over energy price disputes by cutting gas supplies to Ukraine during the winters of 2006 and 2009. And Rospotrebnadzor is widely seen as a tool of Russia’s foreign policy. The chocolate ban is reminiscent of a 2006 ban on Georgian mineral water and wine as bilateral tensions heated up, culminating in armed conflict in 2008. In 2010, Onishchenko also ordered Tajik fruit and nuts banned for several months during a time of increased political tensions between the two countries.

Several analysts said it would be foolish to ignore the context of the EU negotiations and Putin’s desire to expand the Customs Union. Even so, Russian officials deny that the Kremlin is using the ban as an instrument of political pressure.

In Kyiv, Valeriy Gladkiy, director of the Bureau of Economic and Social Technologies, a think-tank, said Kazakhstan was helping Russia bully “Ukraine via its manufacturers.”

“These kind of issues usually appear during times of political friction,” Gladkiy said. “Last time, complaints about Ukrainian cheese also weren't spontaneous, but [arose] in the context of political negotiations between Russia and Ukraine.”