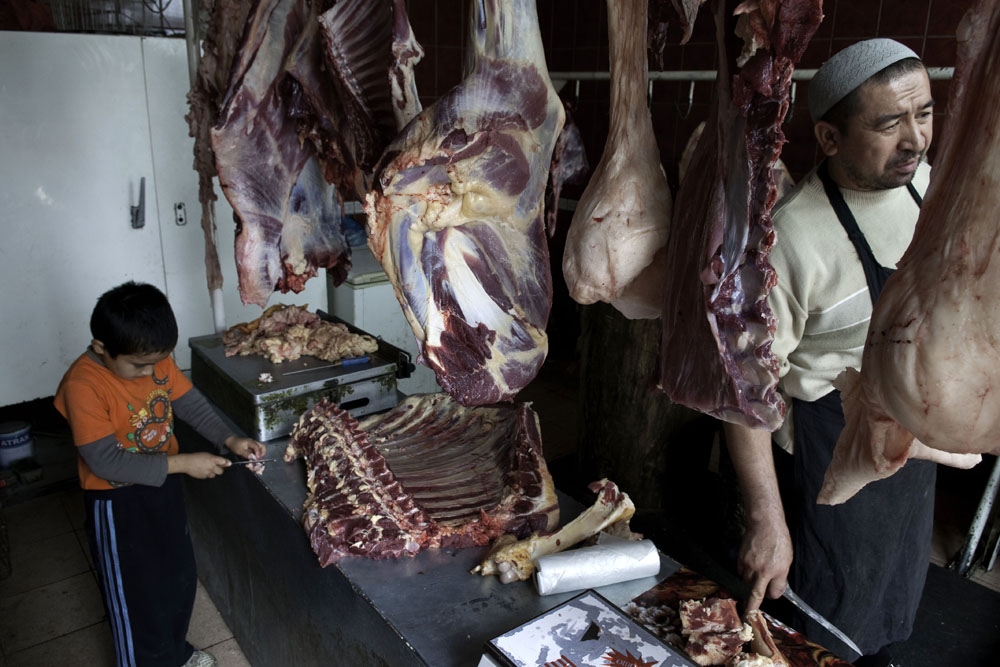 A butcher speaks to a customer on a market street in an Osh neighborhood in early October 2010. Prices for food and fuel are steadily rising in many Central Asian countries as the Russian ruble tumbles this year. (Photo: Dean C.K. Cox)

Pensioner Jyparkul Karaseyitova says she cannot afford meat anymore. At her local bazaar in Kyrgyzstan’s capital, Bishkek, the price for beef has jumped 9 percent in the last six weeks. And she is not alone feeling the pain of rising inflation. Butcher Aigul Shalpykova says her sales have fallen 40 percent in the last month. “If I usually sell 400 kilos of meat every month, in September I sold only 250 kilos,” she complained.

A sharp decline in the value of Russia’s ruble since early September is rippling across Central Asia, where economies are dependent on transfers from workers in Russia, and on imports too. As local currencies follow the ruble downward, the costs of imported essentials rise, reminding Central Asians just how dependent they are on their former colonial master.

The ruble is down 20 percent against the dollar since the start of the year, in part due to Western sanctions on Moscow for its role in the Ukraine crisis. The fall accelerated in September as the price of oil – Russia’s main export – dropped to four-year lows. The feeble ruble has helped push down currencies around the region, sometimes by double-digit figures.

In Bishkek, food prices have increased by 20 to 25 percent over the past 12 months, says Zaynidin Jumaliev, the chief for Kyrgyzstan’s northern regions at the Economics Ministry, who partially blames the rising cost of Russian-sourced fuel.

In Kyrgyzstan, Tajikistan and Uzbekistan, remittances from the millions of workers in Russia have started to fall. In recent years, these cash transfers have contributed the equivalent of about 30 percent to Kyrgyzstan’s economy and about 50 percent to Tajikistan’s. As the ruble depreciates, however, it purchases fewer dollars to send home. Transfers contracted in value during the first quarter of 2014 for the first time since 2009, the European Bank for Reconstruction and Development said last month, “primarily due” to the downturn in Russia. The EBRD added that any further drop “may significantly dampen consumer demand.”

“A weaker ruble weighs on [foreign] workers’ salaries […] which brings some pain to these countries,” said Oleg Kouzmin, Russia and CIS economist at Renaissance Capital in Moscow.

This month the International Monetary Fund said it expects consumer prices in Kyrgyzstan to grow 8 percent in 2014 and 8.9 percent in 2015, compared with 6.6 percent last year. Kazakhstan and Tajikistan should see similar increases. A Dushanbe resident says he went on vacation for three weeks in July and when he returned food prices were approximately 10 percent higher. In Uzbekistan, the IMF said it expects inflation “will likely remain in the double digits.”

The one country unlikely to feel the pressure is Turkmenistan, which is sheltered from the market’s moods because it sells its chief export – natural gas – to China at a fixed price.

One factor that could sharply and suddenly affect the rest of the region is a policy shift at Russia’s Central Bank, which has already spent over $50 billion this year defending the ruble. Some, like former Finance Minister Alexei Kudrin, have condemned efforts to prop up the currency, arguing that a weaker ruble is good for exports.

The tumbling ruble and the drop in the price of oil have helped steer Kazakhstan’s economy into a cul-de-sac, slowing growth projections, forcing officials to recalculate the budget, and suggesting the tenge is overvalued. The National Bank already devalued the currency by 19 percent in February. On October 21, National Bank Chairman Kairat Kelimbetov urged Kazakhs not to worry about another devaluation, but investors grumble that he said the same thing less than a month before February’s devaluation.

Another devaluation would send a distress signal to investors, says one Almaty banker. Astana “lost a fair bit of credibility last time,” the banker said on condition of anonymity, fearing new legislation designed to combat panic selling. “They need to be much more careful about how they handle expectations going forward. And that is affecting how things are happening this time. People seem to be a lot more dollarized compared to a year ago and more hesitant to hold large tenge balances.”

“My personal position?” the banker added. “I’m not holding tenge.”

Meanwhile, a mystery investor has been propping up the tenge by selling hundreds of millions of dollars a day, according to Halyk Finance in Almaty. On October 21 “a larger player, again offsetting the intraday trend, sold about $650 million,” Halyk said in a note to investors. On October 20 a “large player” also sold about $600 million, which kept the tenge stable at about 181/dollar. Observers believe the “large player” is a state-run company with ample reserves, but are mystified that the Central Bank refuses to comment and concerned that the interventions appear to be growing.

In Kyrgyzstan and Tajikistan, central banks have dipped into limited reserves to ease their currencies’ slides. Nevertheless, the Kyrgyz som has fallen by 12 percent against the dollar this year, the Tajik somoni by about 5 percent. The World Bank said this month it expects the somoni to sink further.

Renaissance Capital’s Kouzmin cautions against the bank interventions in Central Asia, which use up reserves and widen trade deficits. “It makes sense for the national banks of these countries to let currencies depreciate to some extent to keep national competitiveness,” he told EurasiaNet.org.

Overall, the slowdown in Russia has long-term effects on Central Asia. “Portfolio investors look at the region as a whole. If you’re a CIS fund, the news on Russia has been bad and has caused the withdrawal of funds” from the region, said Dominic Lewenz of Visor Capital, an investment bank in Almaty. “So the trouble in Russia has hit things here.”

GDP growth projections have fallen markedly across the region, but nowhere near the levels seen during the 2008-2009 financial crisis. Everything, it seems, depends on Ukraine. Any worsening scenario there would have “far-reaching implications” for the region, possibly on food security, according to the EBRD.

Back at the bazaar in Bishkek, Orunbay Jolchuev was forced this month to increase by 15 percent what he charges for flour. But at least sales have not been affected. “We all need flour, we all need to eat bread, macaroni, dough,” Jolchuev said. “It’s not something people can cut back even if it becomes too expensive.”