None could miss Beijing’s big moment. 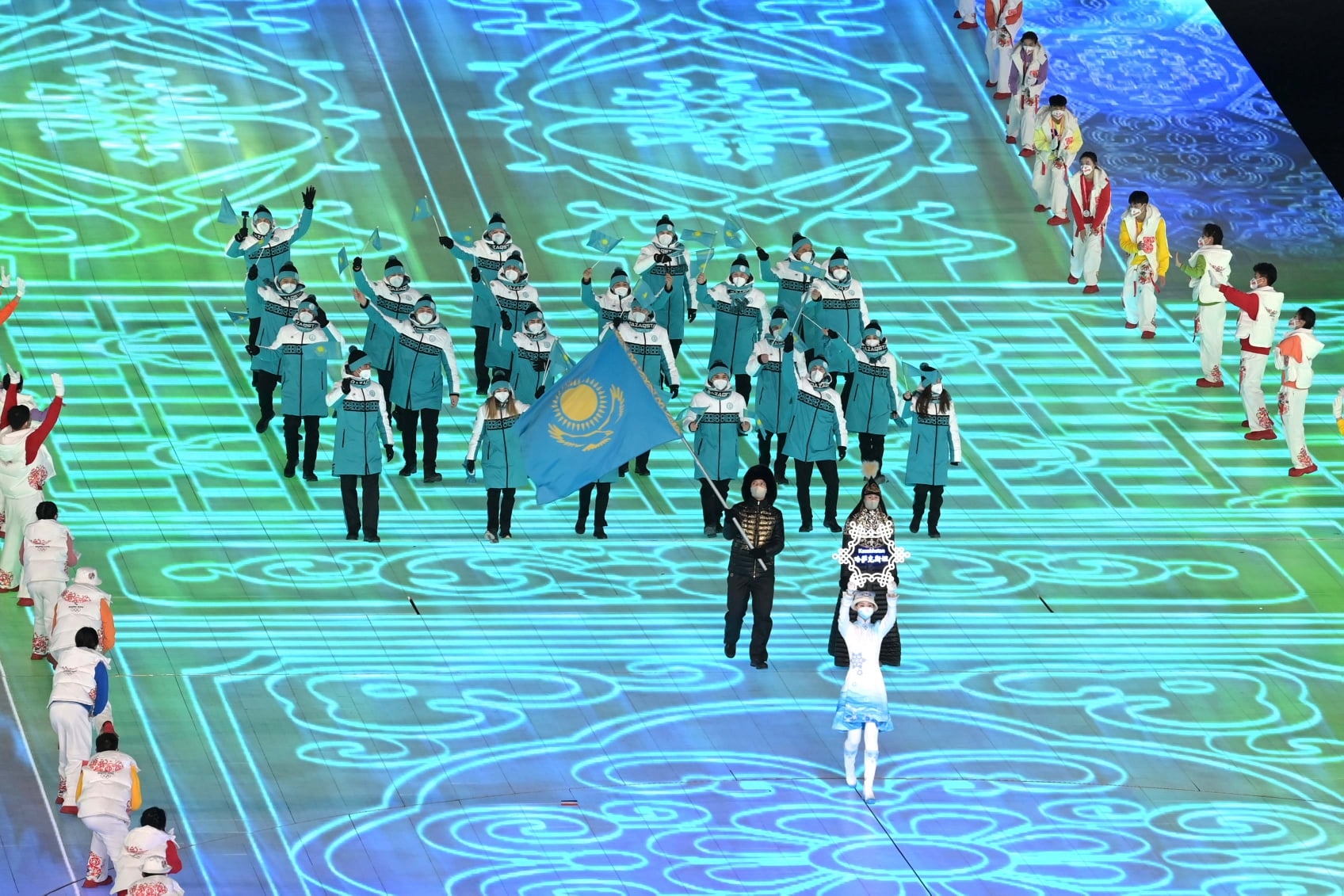 The Kazakh delegation is the largest from Central Asia. (Kazakh government handout)

No other region in the world was as solidly represented by its heads of state at the dazzling February 4 opening ceremony in Beijing’s "Bird's Nest" stadium.

In the cases of Turkmenistan and Tajikistan, the presidents outnumbered athletes. For Kyrgyzstan and Uzbekistan, it was a hard-fought draw. Only Kazakhstan produced a large Olympic team.

Since the pandemic began, Xi has not set foot outside China. Last month he held a virtual heads of state summit marking three decades of China’s diplomatic relations with the region. During the January 25 event, the Chinese leader said he aims to nearly double turnover with Central Asia to reach $70 billion by 2030. At the turn of the millennium trade stood at just $1.5 billion, according to the state-run People’s Daily.

CCTV reported that apart from the opening ceremony, leaders were expected to attend a welcome banquet and "relevant bilateral activities.”

Around 20 heads of state confirmed their participation, along with the general secretaries of the United Nations and the World Health Organization. Many western countries refused to send diplomatic delegations in protest of China's human rights abuses in its majority-Muslim Xinjiang region.

For many watching at home in Kazakhstan, the question is “what if?”

Business capital Almaty missed out on the chance to host these games by a mere four votes back in 2015. Instead of ringing in 2022 in anticipation of what would have been its most prestigious, expensive sporting showpiece to date, Kazakhstan was rocked by protests.

When those demonstrations escalated into lethal clashes and looting last month, it was Almaty that saw the worst of the devastation. The presidential residence, where visiting dignitaries might well have been received, was the site of a bloody battle.

Kazakhstan’s sporting delegation is the only large one from Central Asia, consisting of 34 athletes. Mogul skier Yulia Galysheva, a bronze medalist at the 2018 edition in Pyeongchang seems the best bet for a medal. A poor showing at last year’s summer games and President Kassym-Jomart Tokayev’s promise of a bold new era make a podium finish or two highly desirable.

It was not immediately clear if Nursultan Nazarbayev’s billionaire son-in-law, Timur Kulibayev, had attended the event in Beijing. Kulibayev is chair of the National Olympic Committee but finds himself out of favor at home and abroad as the post-crisis reconfiguration of Kazakhstan’s elite continues apace.

On January 17 he left his position as head of the influential Atameken business lobby in Kazakhstan and is reportedly unlikely to retain his position as a non-executive director on the board of the Russian state energy giant Gazprom.

Whatever they achieve, Kazakhstan’s athletes are in a good place aesthetically.

In Kyrgyzstan, the pre-games social media noise was largely indignation over how much better Kazakhstan’s outfits appeared. The Kyrgyz jackets do not look like potato sacks, insisted officials, who said they had been supplied free of charge. In any case, Kyrgyzstan’s lone sportsman, skier Maksim Gordeyev, appeared in a different outfit altogether during the ceremony.

President Sadyr Japarov’s office announced on January 24 that he had begun self-isolating ahead of his visit to Beijing.

At the Central Asia-China online summit the next day, Japarov talked up a long-stalled railway linking China to Uzbekistan by way of Kyrgyzstan as “a flagship project of the Belt and Road Initiative.” This month, Kyrgyzstan’s state rail company said it had submitted documents for Beijing to review on the multi-billion-dollar project.

Neither Tajikistan nor Turkmenistan are sending athletes to Beijing, but in Tajikistan’s case this was not by design.

At least two Tajik skiers were hoping to compete, but coronavirus complications scotched qualifiers that were slated to take place in Iran and Pakistan, a Tajikistan Olympic committee source told Russian state media.

Sports-mad Turkmen President Gurbanguly Berdymukhamedov is unlikely to hit the slopes so far away from home, but he did grant Chinese state media a rare interview in which he pushed all the right buttons.

Praising the quality of China’s stadiums, Berdymukhamedov told CCTV that Turkmenistan “firmly adhere(s) to the ‘one China’ policy and supports the peaceful development of cross-strait relations and the peaceful unification of China.”

Turkmenistan has seen its trade with China grow nearly 200 times in the last 20 years, reaching $6.5 billion in 2020 – almost entirely gas – but it is anxious to see further gains.

Berdymukhamedov used the interview to reiterate his call for the construction of Line D, the fourth spur of a giant gas pipeline running from Turkmenistan to China. The extension would greatly increase Turkmen exports to China that currently stand at around 35 billion cubic meters per year.

Uzbekistan will be represented at the games by a single skier, Komiljon Tukhtayev. The national ceremony outfit was designed by the local company 7Saber, whose logo has been claimed as the brainchild of President Shavkat Mirziyoyev’s son-in-law, Otabek Umarov, the vice president of the Olympic Council of Asia.