Central Asia: Measuring the Geopolitical Impact of the Bishkek Bombing 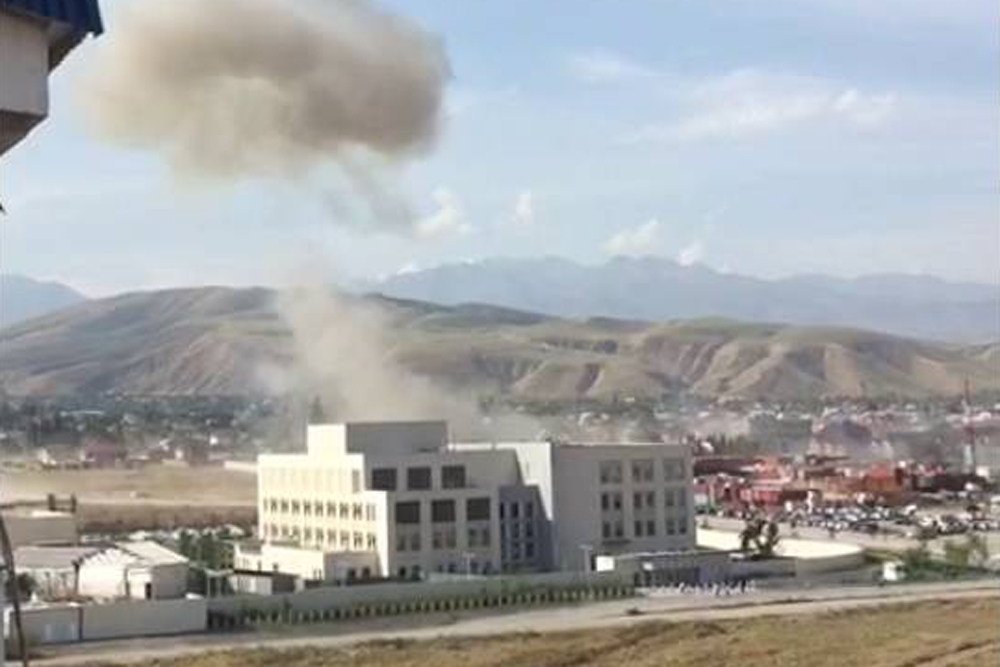 A screen grab from eyewitness footage shows smoke rising over the Chinese Embassy in Kyrgyzstan’s capital Bishkek after an apparent suicide bombing. China has been gradually building up its security presence in Central Asia, and it is easy to imagine that the August 30 bombing could prompt Chinese leaders to adopt a significantly more aggressive posture in the region. (Photo: YouTube video screen grab)

While attention in Central Asia in late August was fixated on the looming leadership transition in Uzbekistan, another event with even greater potential to reshape the region occurred in Kyrgyzstan: an apparent suicide bomber attacked the Chinese embassy in Bishkek, killing himself and wounding at least three others.

If this does turn out to be a terror attack against China, the consequences for the regional balance of power could be significant. While China has overtaken Russia as Central Asia’s leading economic power, Beijing to date has been more cautious in projecting its political and military influence, sensitive to the feelings of the region’s traditional power, Russia.

Nevertheless, China has been gradually building up its security presence in Central Asia, and it is easy to imagine that the August 30 bombing of its Bishkek embassy could prompt Chinese leaders to adopt a significantly more aggressive posture in the region.

While the attacker has not yet been identified, speculation immediately turned to the Uighurs, a Muslim, Turkic-speaking minority whose homeland in China’s Xinjiang region is just across the border from Kyrgyzstan. China has been carrying out a decades-long policy of aggressive assimilation of the Uighurs, and some have responded with a low-level insurgency against Beijing’s rule. The resulting crackdown by Beijing forced many Uighur groups (both violent and nonviolent) to move to Central Asia, where there also are small indigenous Uighur communities.

China’s security policy in Central Asia is already heavily focused on the perceived threat of Uighur separatist groups operating there. Joint military exercises with Central Asian armed forces usually involve a scenario of fighting Uighur-like separatists. The Shanghai Cooperation Organization (SCO) – a regional group that also includes Russia and all Central Asian states except Turkmenistan – orients its security efforts in Central Asia toward combating the “three evil forces” of “terrorism, extremism and separatism,” a clear echo of Beijing’s rhetoric on the Uighur issue.

Uighur activists in Central Asia, along with human rights groups, have accused China of using the SCO to force Central Asian states into repressing legitimate Uighur political activity in the region.

Combating Uighur groups has also driven Chinese security policy with other regional states, especially Afghanistan and Pakistan. This summer, Beijing inaugurated a new “Quadrilateral Cooperation and Coordination Mechanism” with Afghanistan, Pakistan, and Tajikistan. This new group will coordinate efforts on the “study and judgment of the counter terrorism situation,” as well as engage in “intelligence sharing, anti-terrorist capability building, joint anti-terrorist training and personnel training.”

Until now, the threat to China posed by Uighur activity in Central Asia has been mostly theoretical. What specific actions China may take in response to the Bishkek suicide bombing are not yet clear.

Thus far, at least publically, a Chinese Foreign Ministry spokesman has only said that Beijing has “requested that the Kyrgyz side immediately implement whatever measures it can to ensure the safety of Chinese institutions and citizens in Kyrgyzstan and quickly investigate … this incident and severely punish those responsible.” Another Foreign Ministry statement asserted that China regarded the blast as an act of terrorism, adding that Chinese officials would respond “resolutely.”

It is not a stretch to imagine that China will now expand its Central Asian security efforts in some fashion, especially if this is not just a one-off bombing and is followed (as seems plausible) by additional attacks.

China will face a number of substantial obstacles if it treads too heavily in Central Asia. While Central Asian governments often mistrust Russia, it is still the devil they know: government and military officials in today’s Central Asia grew up in the Soviet Union, speak Russian, and were educated and trained in Soviet and Russian institutions.

To officialdom, as well as the general population in Central Asia, China is far more unfamiliar and, as such, is the object of much paranoia. This wariness was evidenced most recently by large-scale protests in Kazakhstan over a proposed land law that many saw as opening the door for a Chinese takeover of the country. Chinese companies and individuals have been targets of xenophobic attacks.

An expanded Chinese security and political presence in Central Asia would likely alarm Russia. While Russia has generally welcomed China’s global rise as part of the multi-polar, non-Western world order it wants to create, the Kremlin remains deeply suspicious of China’s presence in Central Asia, a region which Russia would like to maintain as unipolar and oriented toward Moscow.

The creation of the Afghanistan-China-Pakistan-Tajikistan group rattled some in Moscow who worried that China is becoming too assertive in Central Asia. “Russia’s involvement in Ukraine and the Middle East has resulted in us losing our position in Central Asia. It appears that in this ‘Central Asian NATO’ under the Chinese umbrella, Russia may be the odd one out,” Andrei Serenko, an analyst for a Russian think tank, the Center for the Study of Contemporary Afghanistan, said in an interview with the newspaper Izvestiya.

A more aggressive Chinese posture in Central Asia would also call into question the utility of the Collective Security Treaty Organization (CSTO), an entity that Moscow has been trying to position as the guarantor of peace in Central Asia. Its exercises have tended to simulate Islamist attacks from Afghanistan, a scenario that remains unlikely. A crisis that China responds to more actively than Russia would add to the perception that the CSTO is a paper tiger and that Russia is a declining power.

While the CSTO’s march toward oblivion – along with China’s rise in Central Asia – is probably inevitable, the attack in Bishkek has likely accelerated it.