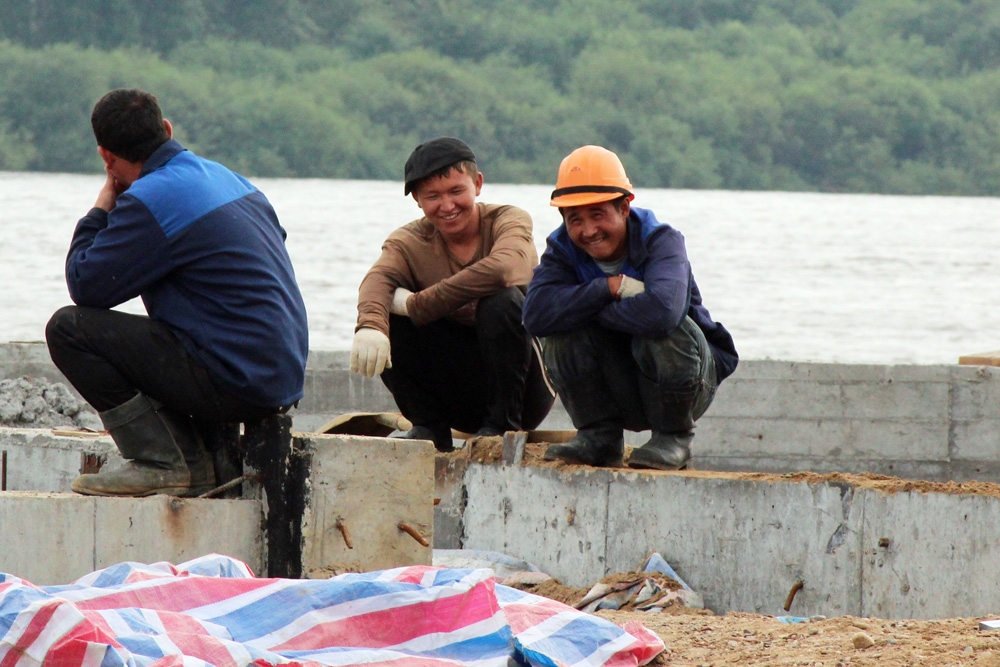 Traditionally the bulk of migrant laborers in Russia’s Far East have come from China, with a few North Koreans mixed in. But of late, workers from Central Asia have been pushing their Chinese competitors off the lowest rung on the labor ladder in eastern Siberia.

Chinese citizens still comprise a sizeable majority of the foreign workforce in the Amur Region, as well as other areas of the Russian Federation that border China. But in just the past few years, the migrant worker ratio of Chinese to Central Asians in the Amur Region has gone from four-to-one down to just over two-to-one, according to official statistics.

Employers in the Amur regional capital Blagoveshchensk, a city of 220,000, say rising wage expectations of Chinese workers make it more cost-effective for them to employ migrants from formerly Soviet republics like Uzbekistan and Kyrgyzstan. China’s rapidly rising prosperity at home is putting pressure on Chinese migrants to earn more and send more home to relatives. At the same time, traditional migrant labor markets for Central Asians in Western Russia, especially Moscow and St. Petersburg, are becoming glutted, prompting an increasing number to explore opportunities in the Far East.

“For sure it’s the best option to make money in Moscow. But it’s too hard to find a place there these days. There are too many of us Uzbeks over there already,” said Batyr, a migrant from Uzbekistan who has worked for the past six months in Blagoveshchensk laying asphalt. It’s not uncommon to encounter lots of Central Asians in the city these days, mainly in the construction sector. In other Far Eastern cities, including Vladivostok and Petropavlovsk-Kamchatsky, Central Asians have found work driving public buses.

Aside from lower wage expectations, Central Asians have a competitive advantage because they don’t need visas to travel to Russia. Chinese workers, on the other hand, must cope with a visa regime that hampers many would-be illegals from crossing the border. For those wishing to work officially, the approval process takes months.

The demand for illegal workers in the Amur Region is significant, official statistics suggest. The local office of the Federal Migration Service issued a quota in 2013 for 13,000 migrant workers, a number that is about 1.5 percent of the overall regional population. At the same time, regional officials estimate there is demand for about 37,000 migrant laborers. The labor gap is the largest in the agricultural sector: one estimate for 2014 projects that for every four farm jobs that will be open, only about one officially registered migrant worker will be available.

Given the regional imbalance of supply and demand, Central Asian illegal migrants appear to be finding life a little easier in the Far East than their counterparts in big cities in European Russia, where harassment and extortion on the part of local officials and law enforcement officers are the norm.

To help blend in, Batyr, the migrant worker from Uzbekistan, says he’s adopted a Russian name -- Dmitry. Batyr’s mannerisms and physical traits are such that locals don’t immediately take him to be from Central Asia as he moves about the city when not on the job. As long as he keeps his mouth shut, he tends not to get hassled. When forced to speak, though, his halting Russian reveals him to be a foreigner.

The influx of Central Asian migrants is reaching the point where local officials’ comparative tolerance may start to dissipate. In the Kamchatka Region, for example, officials are already showing signs of wanting to impose stricter regulations. A Public Chamber meeting in the region is scheduled for September in which one of the items on the agenda has to do with overcrowding in kindergartens, local media outlets report. Locals say that that the children of citizens should be guaranteed slots in public kindergartens before the kids of migrant laborer families are offered seats. Others complain that pregnant Central Asian women are traveling to the Far East to give birth in public hospitals, placing a burden on health services that are already stretched thin.

Evgeny Kuzmin is a freelance journalist. He worked as an editorial associate for EurasiaNet.org in 2012.