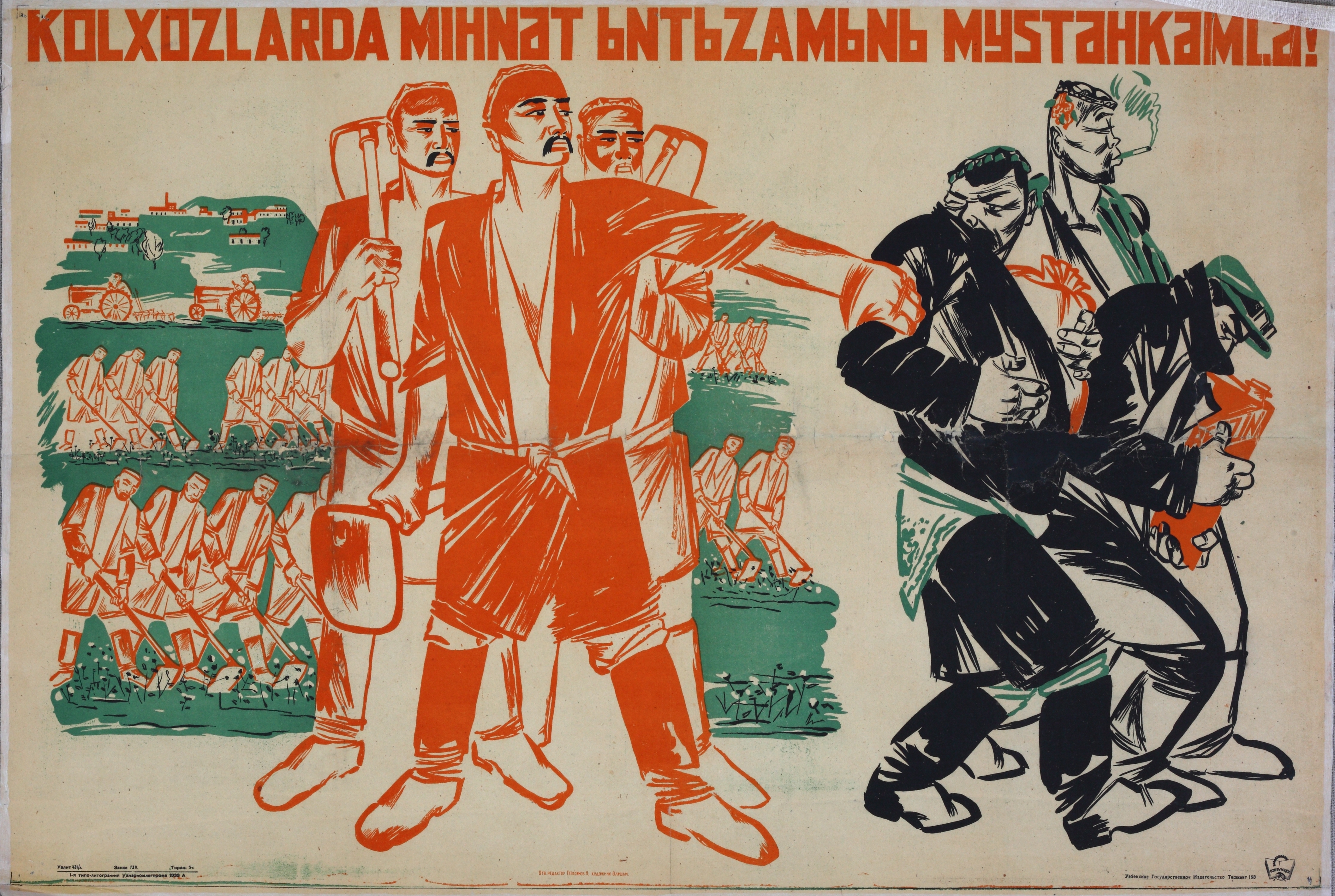 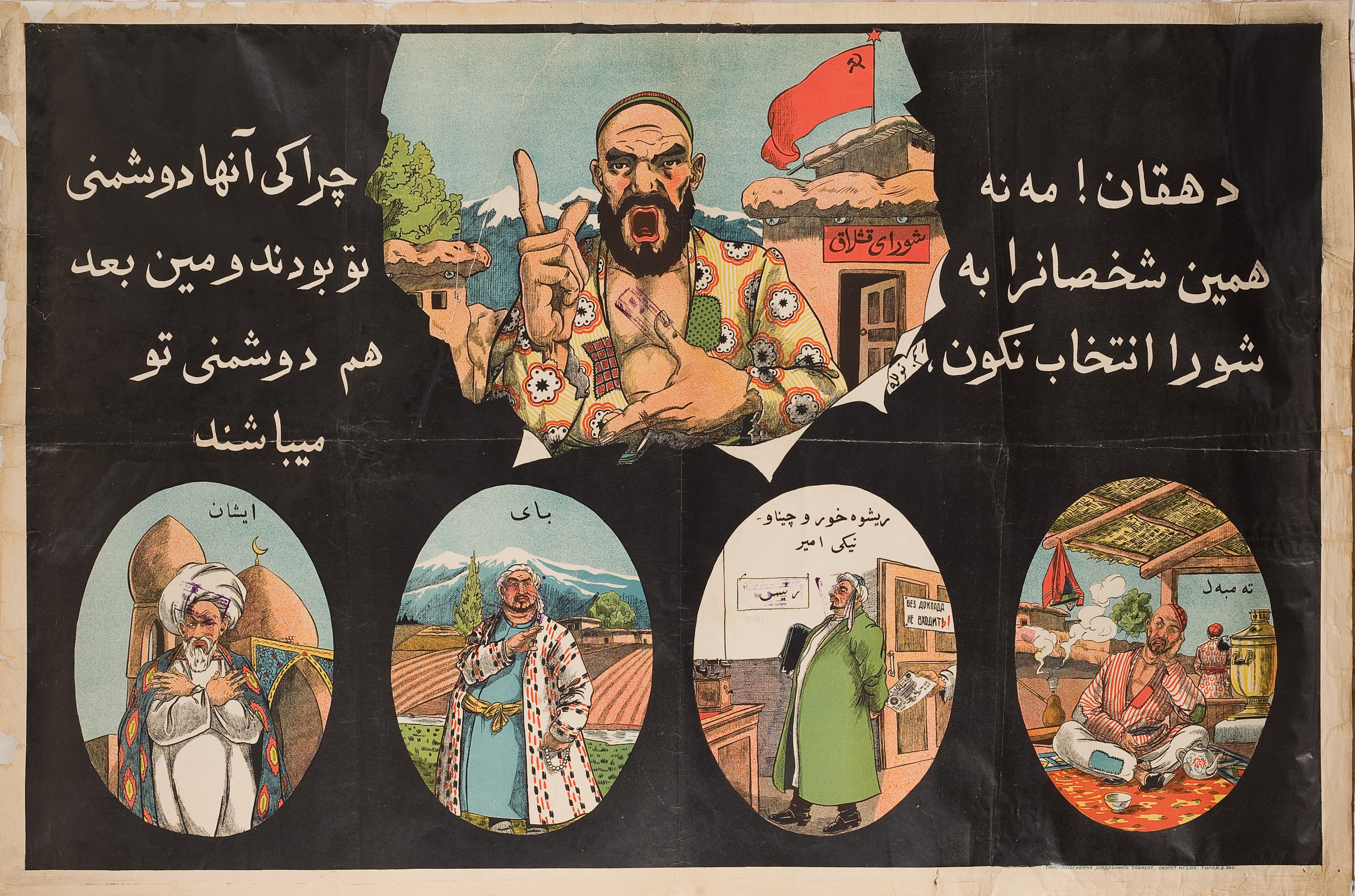 “Peasant: Don't elect these people. They were your enemies and remain your enemies” – Tajik, Tashkent, 1920s (Mardjani) 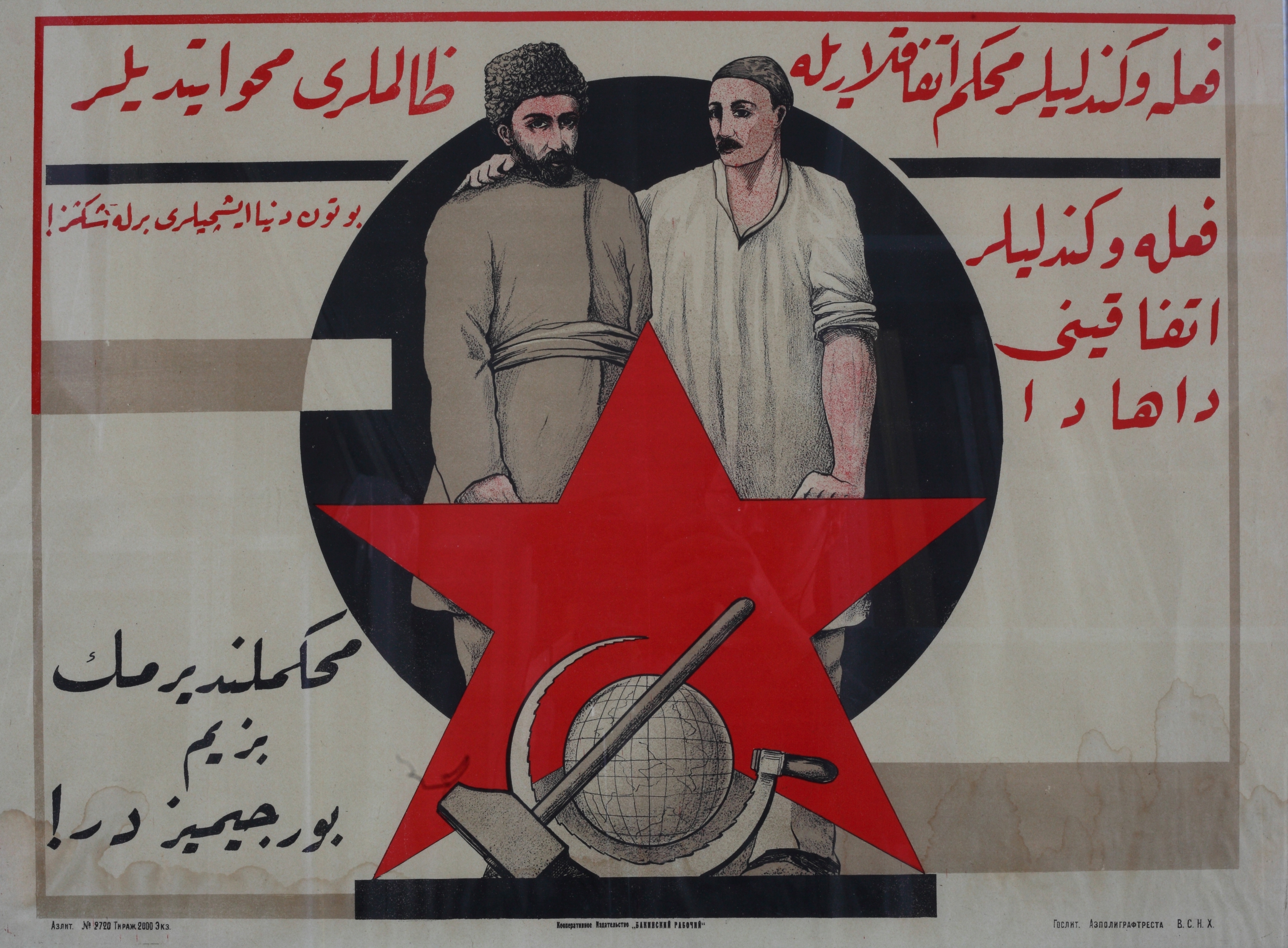 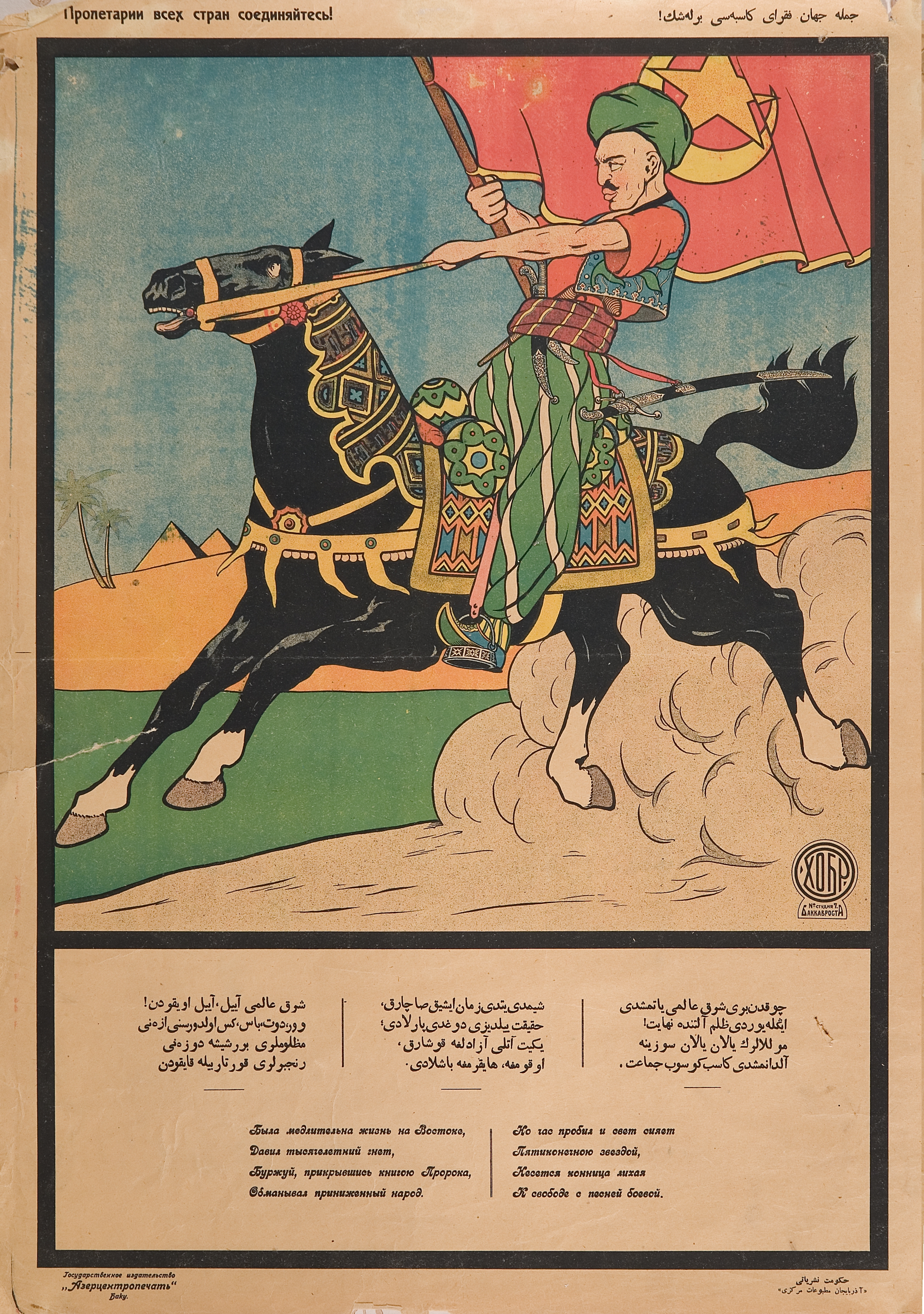 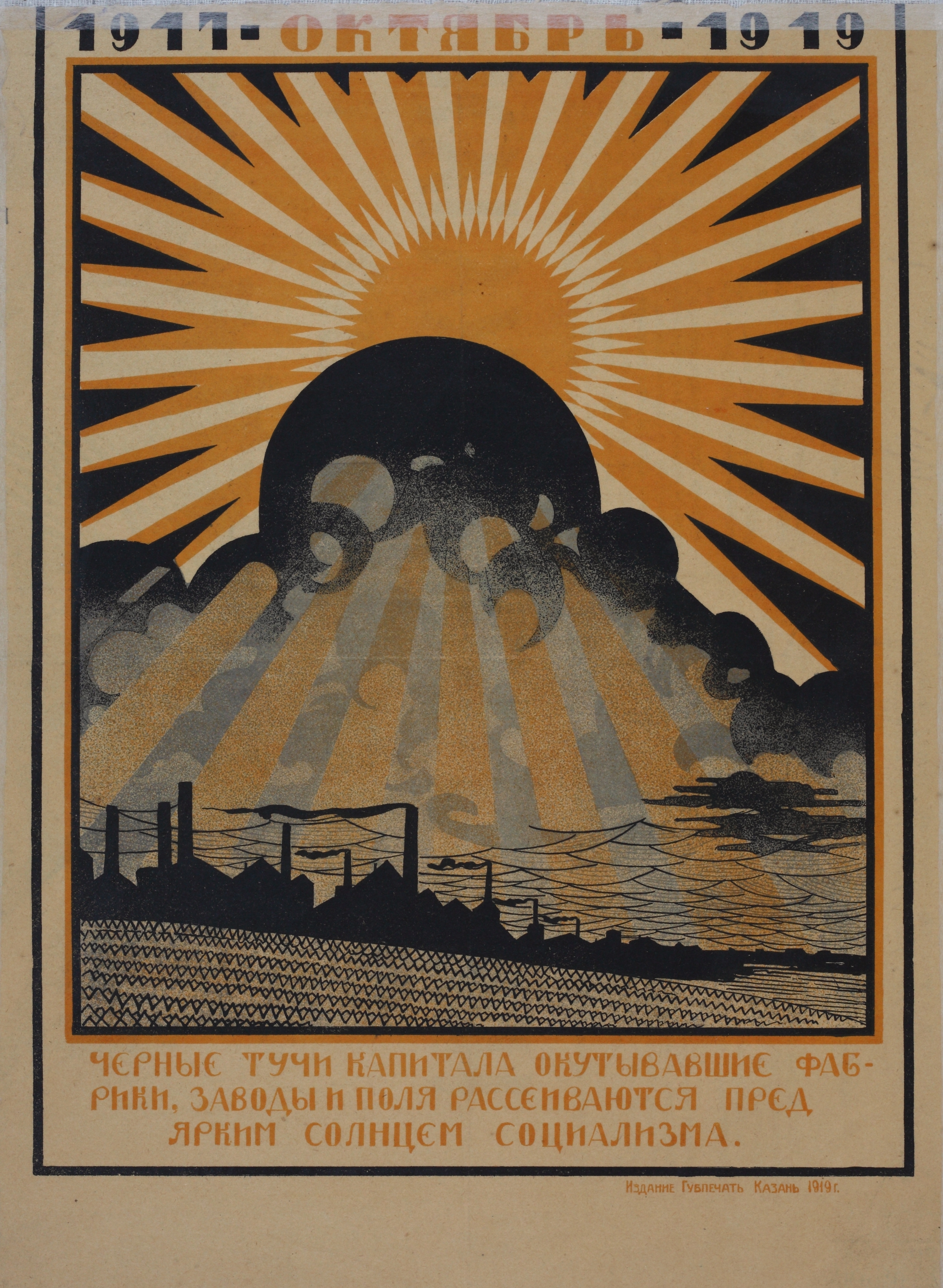 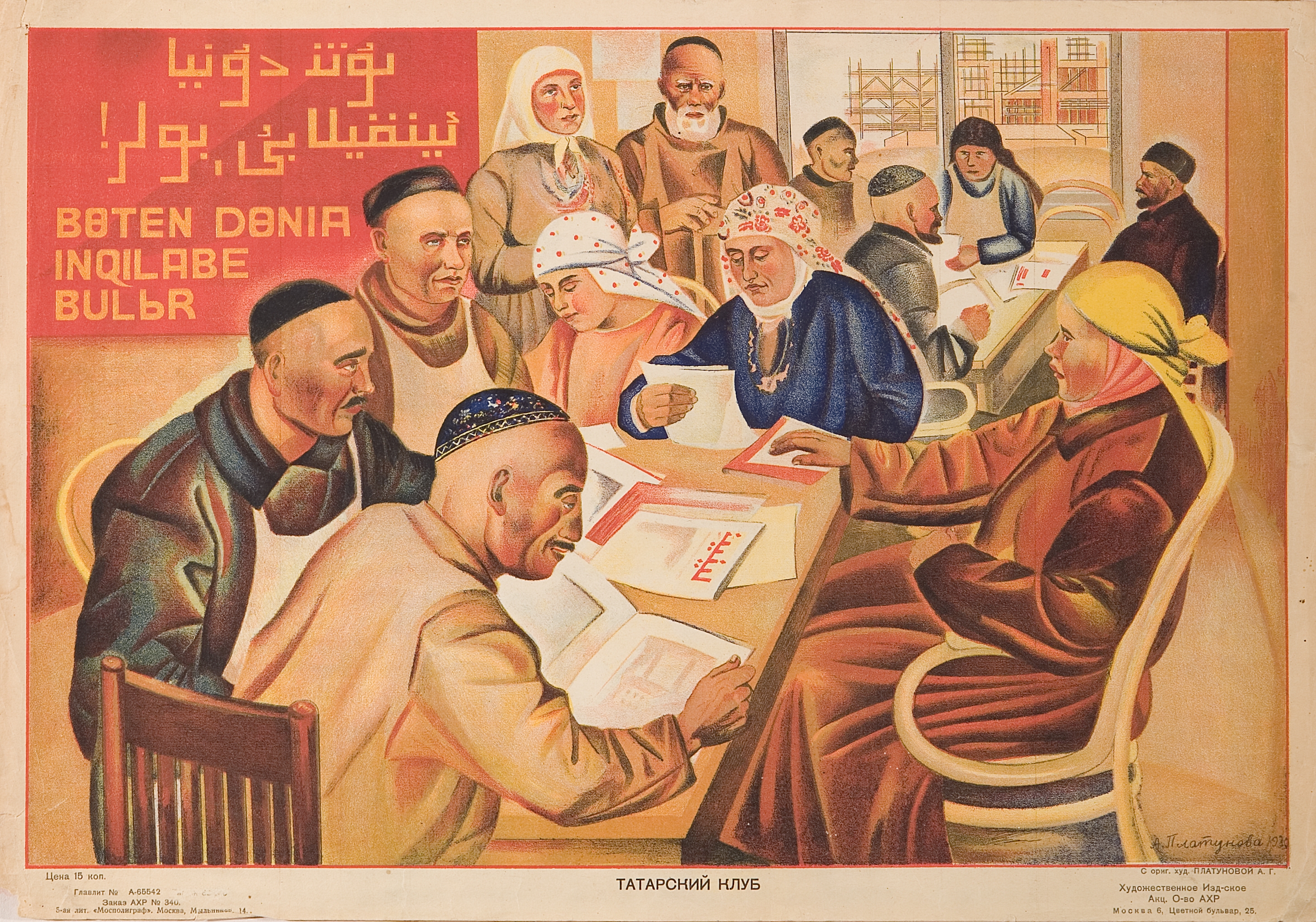 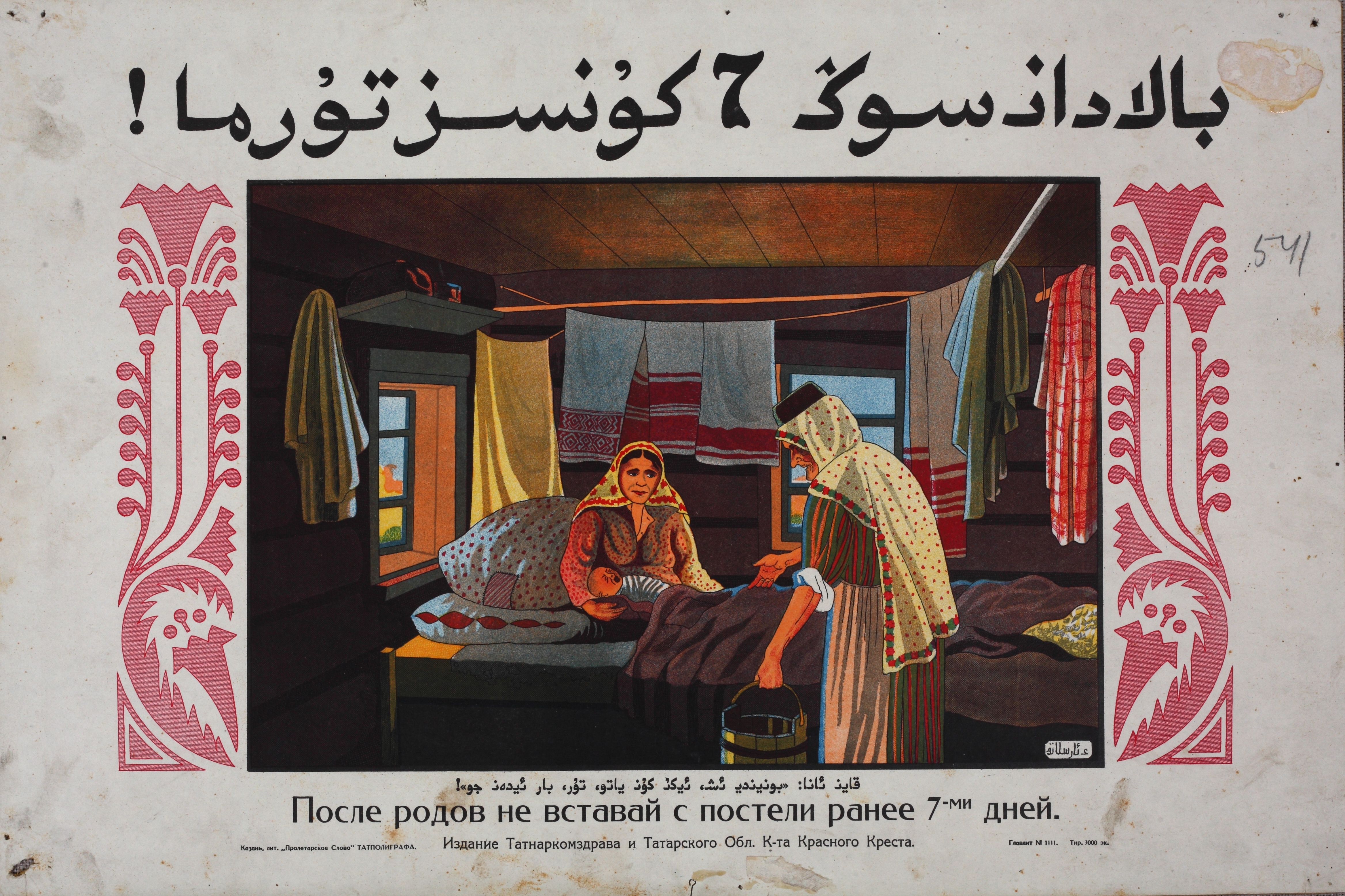 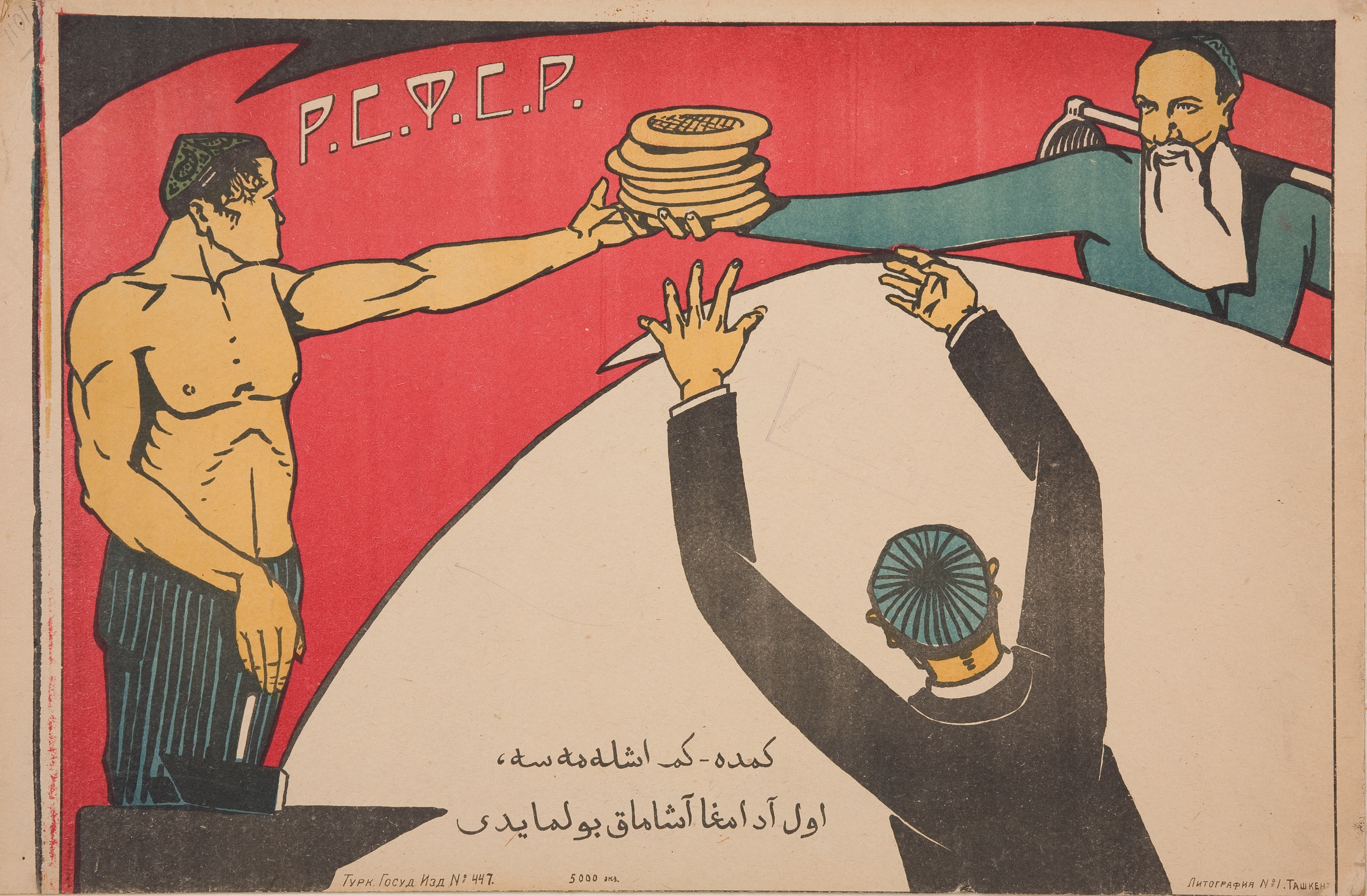 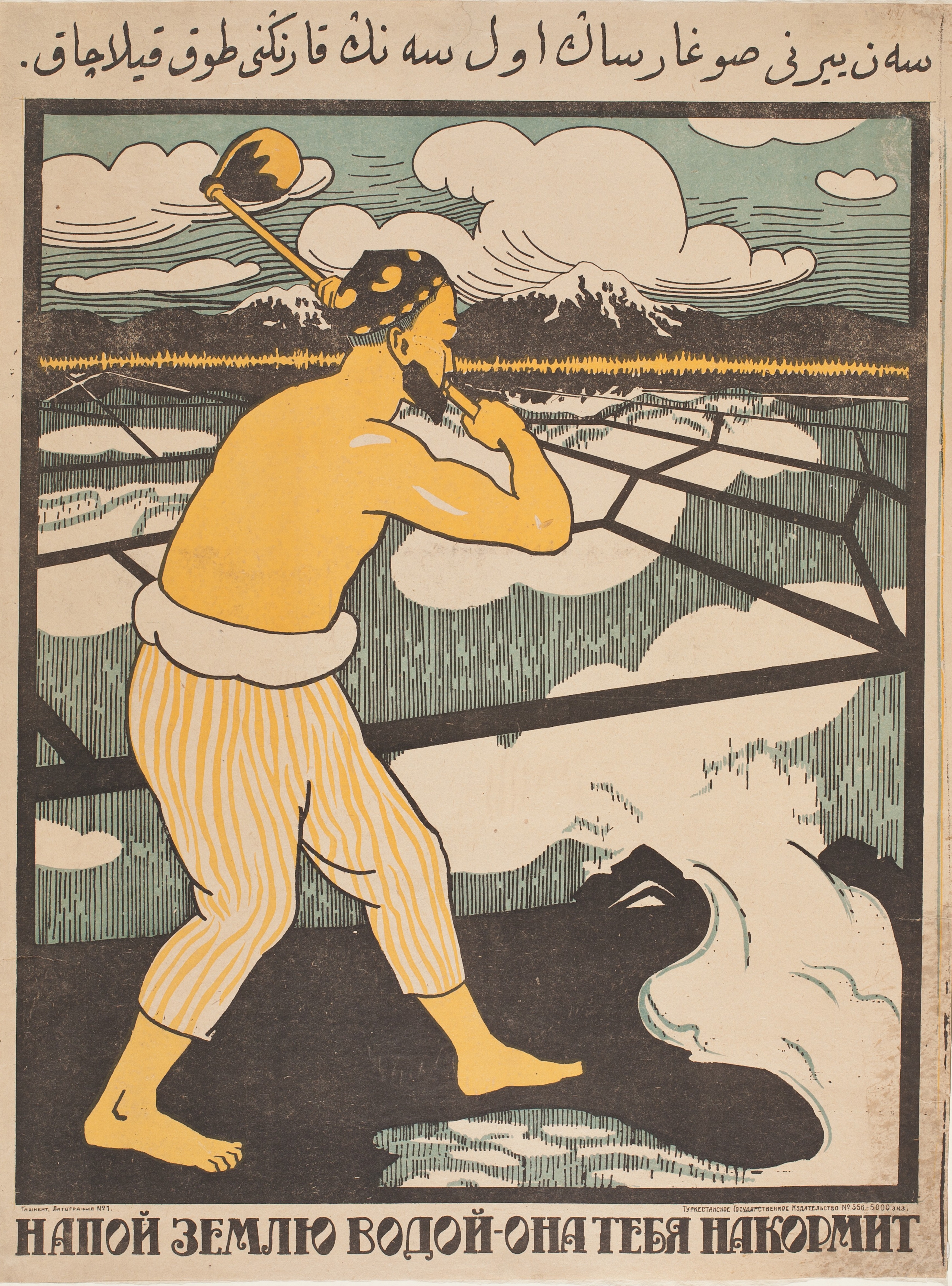 “Water soil and it will feed you” – Russian and Uzbek, Tashkent, 1920s (Mardjani) 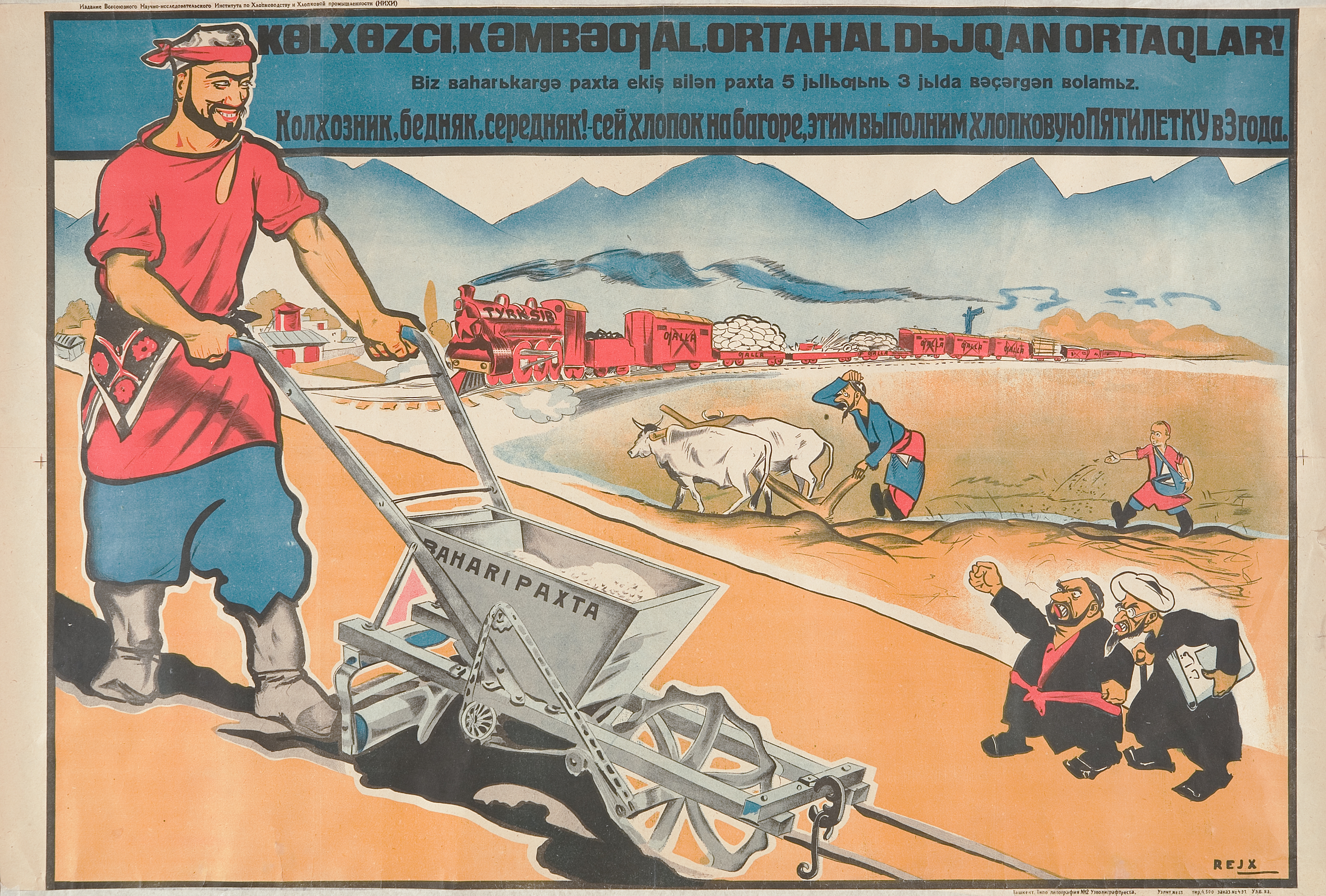 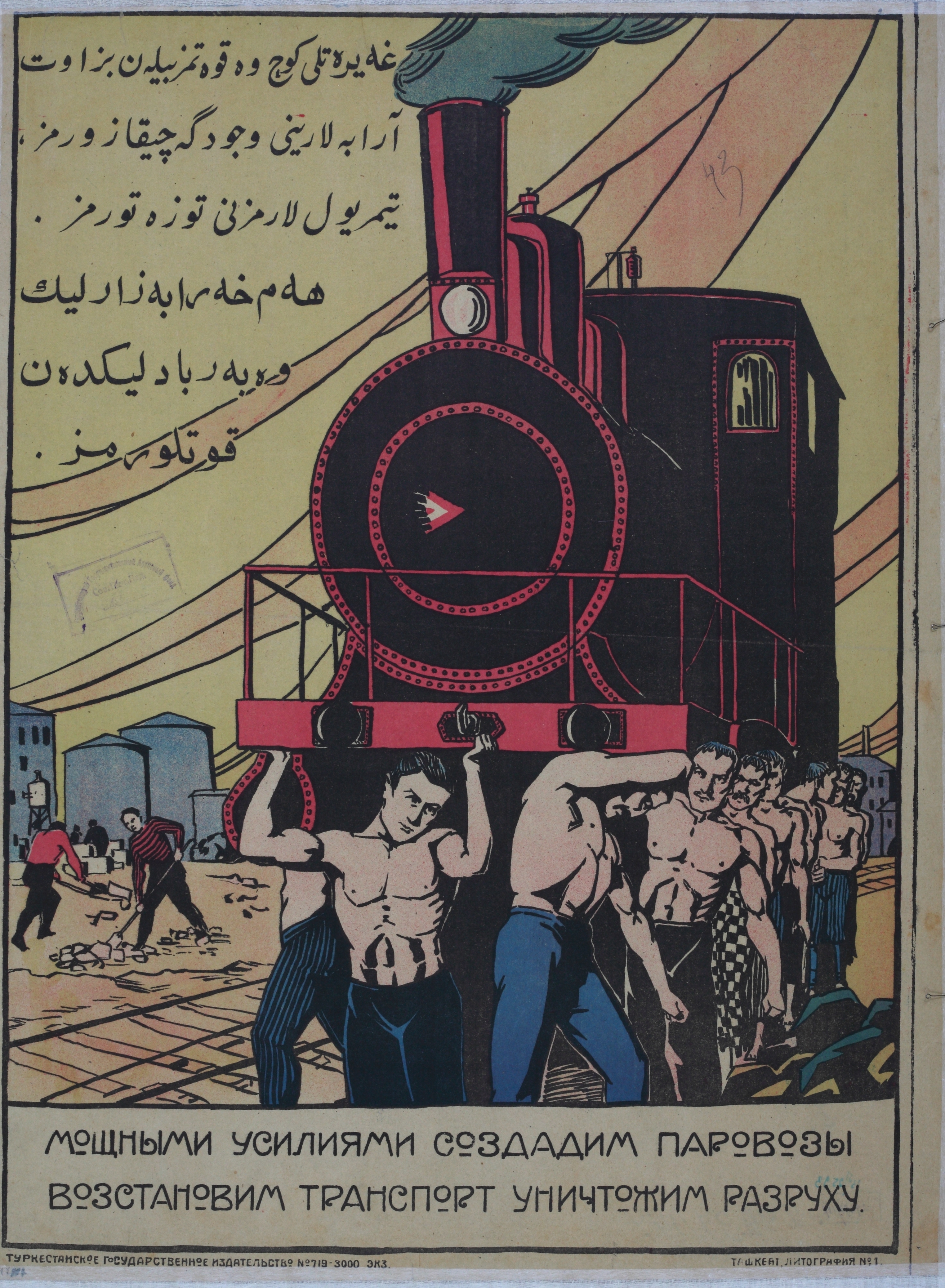 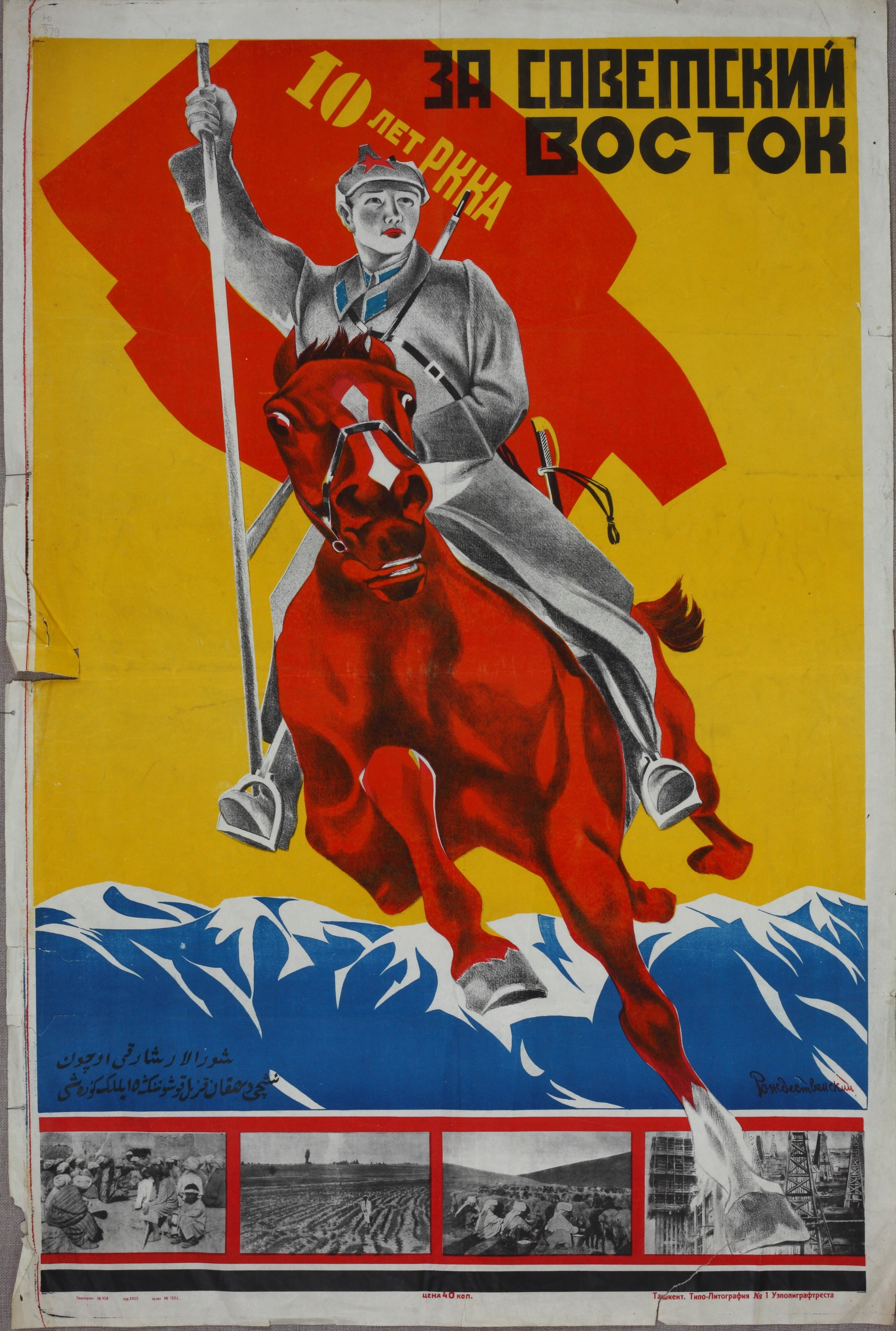 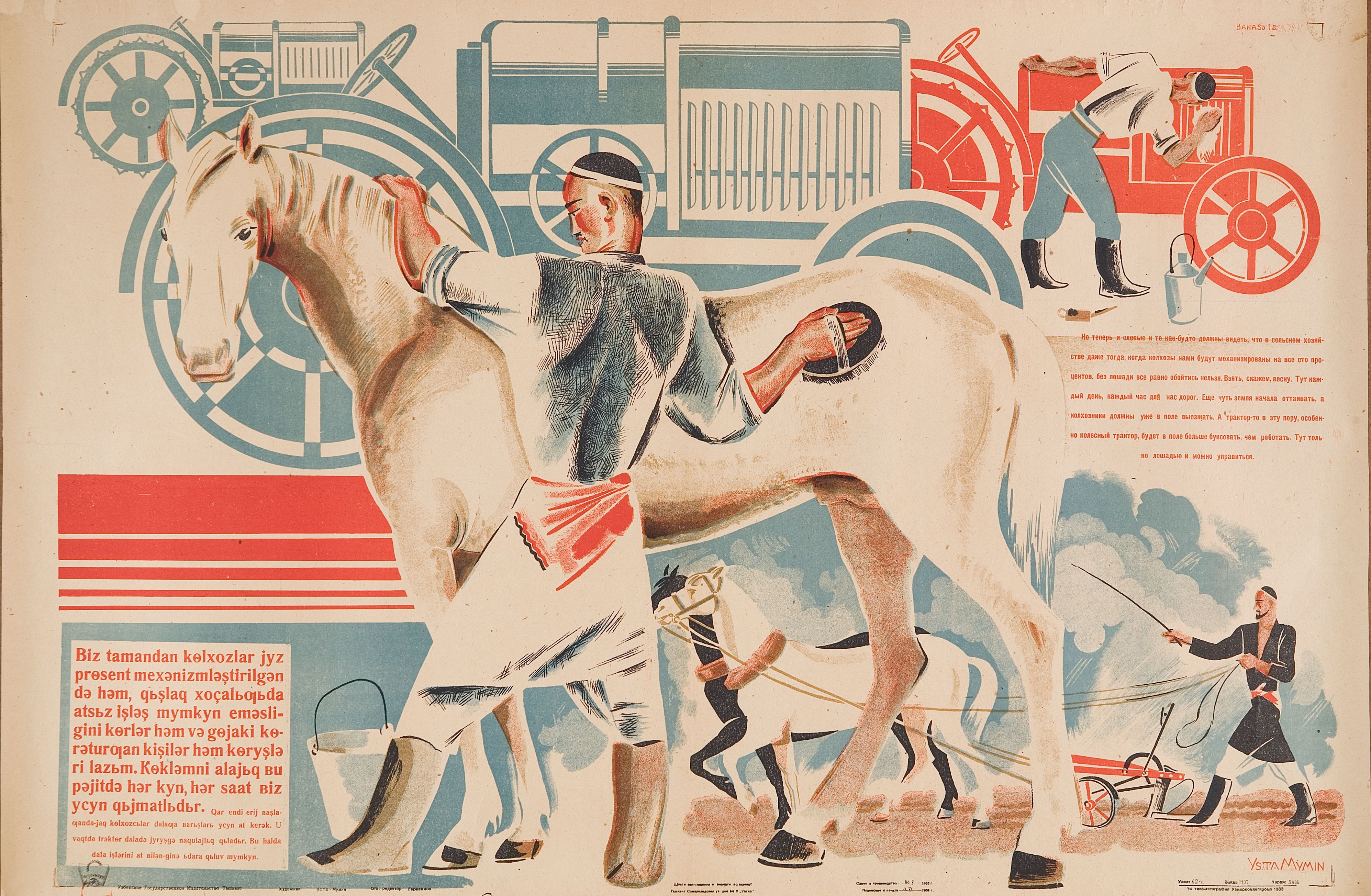 Despite the rise in mechanized farming, “we cannot dispense with the horse” – Russian and Uzbek, Tashkent, 1933 (Mardjani) 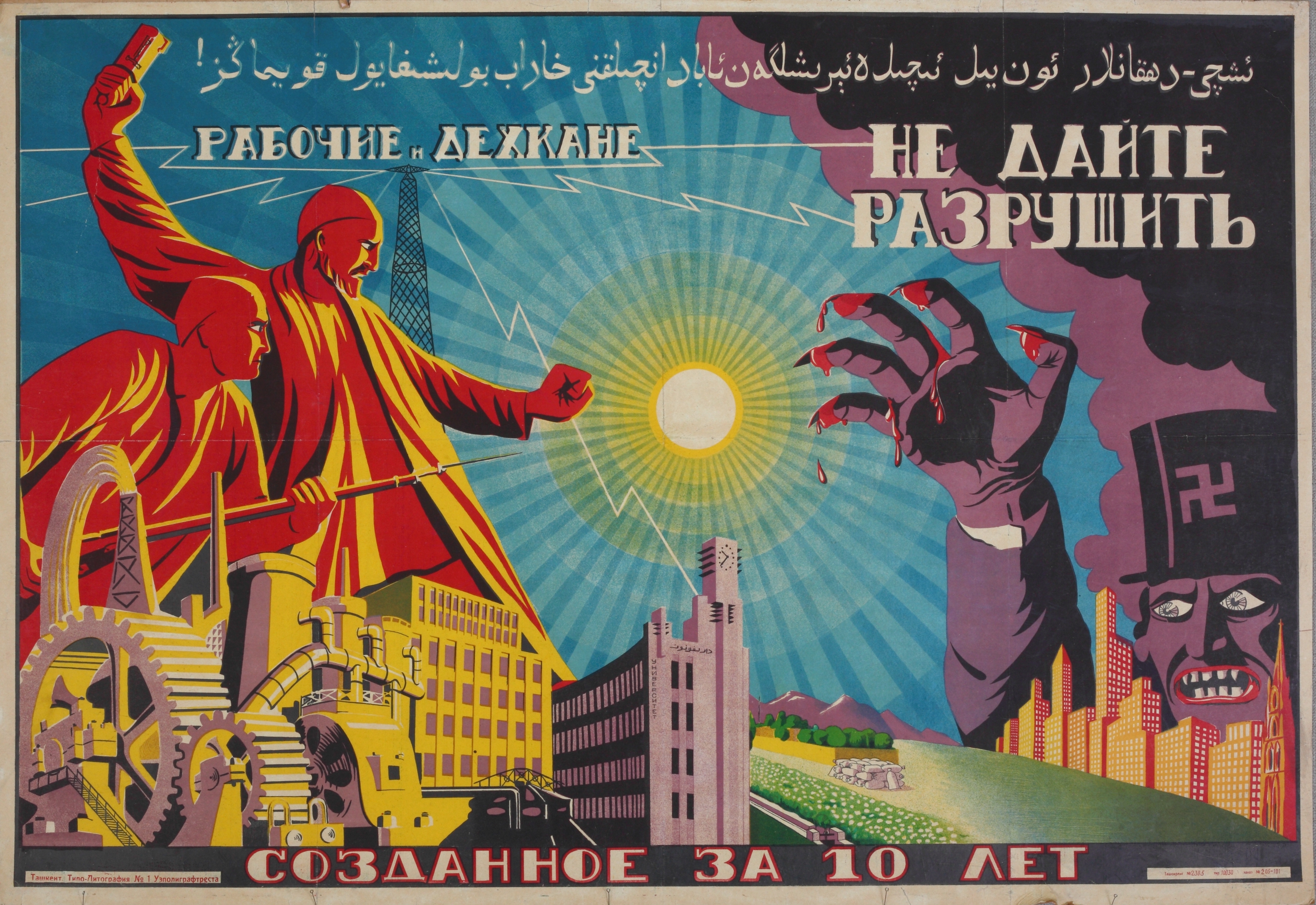 “Workers and Peasants: Don’t let them destroy what was created over 10 years” – Russian and Uzbek, Tashkent, 1927 (SCMCHR) 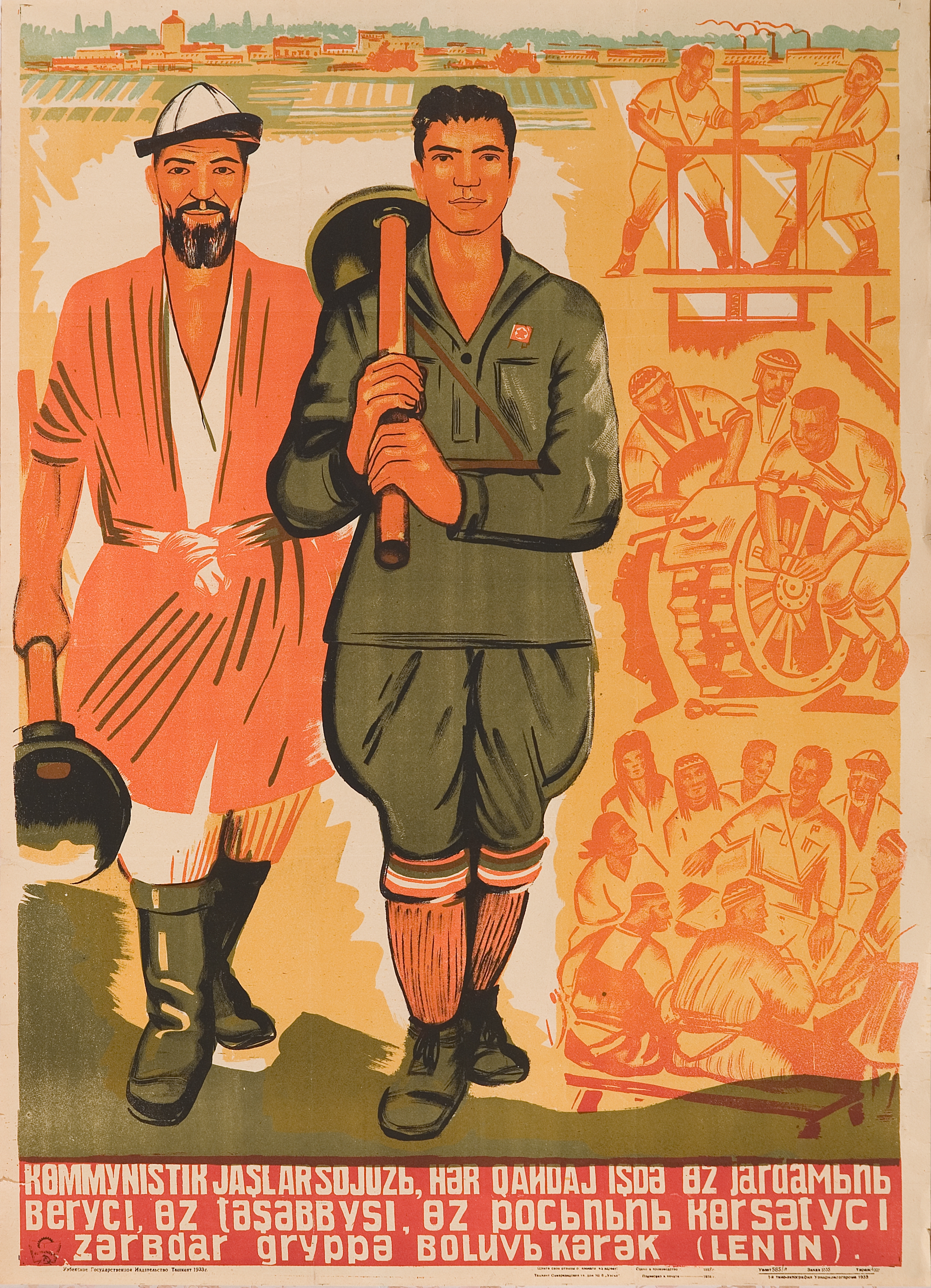 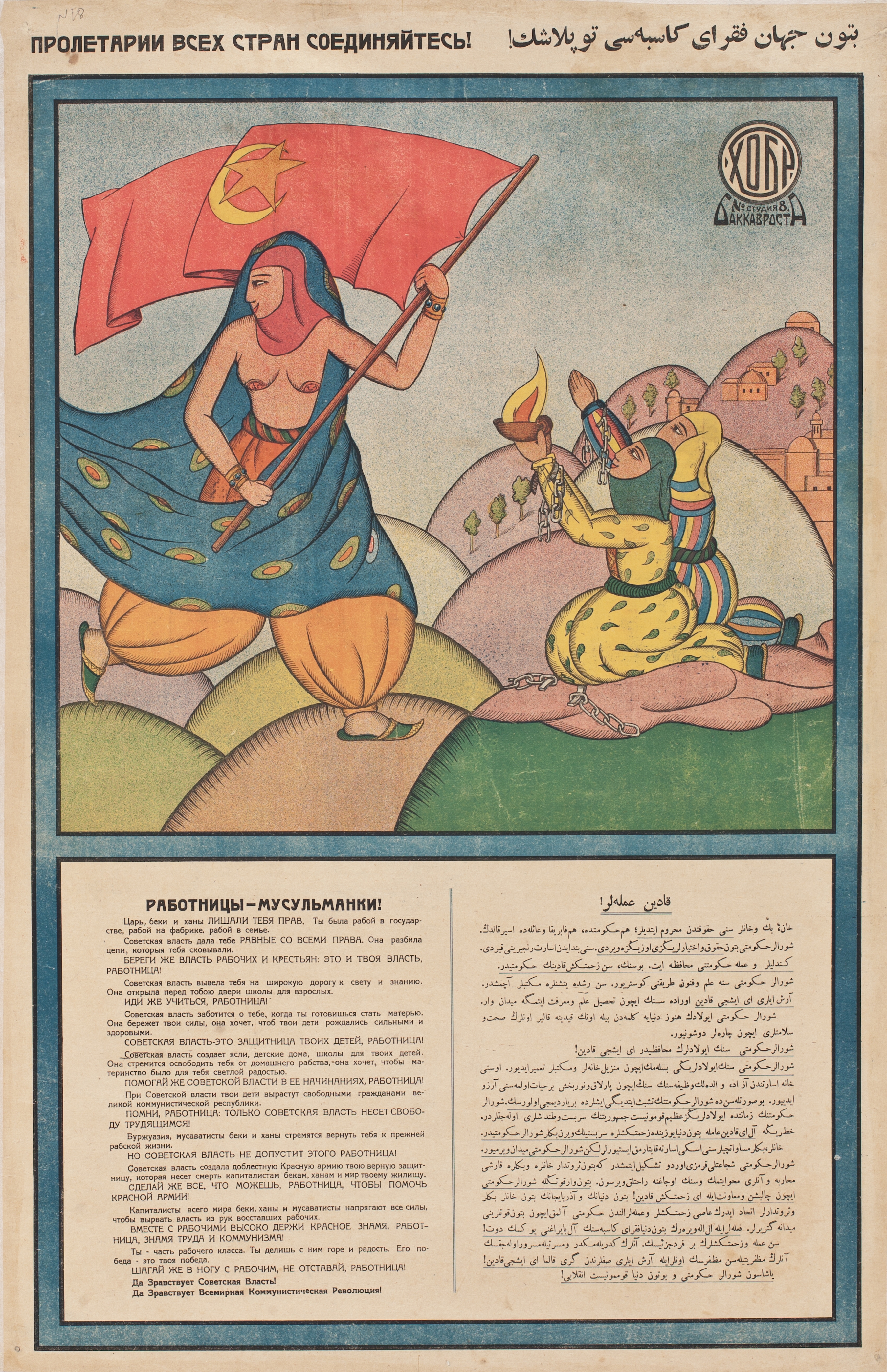 “Female Muslims: The tsar, beys and khans took your rights away” – Azeri, Baku, 1921 (Mardjani)
prev
next

A new exhibit in Moscow offers a colorful way to trace early Soviet history in Central Asia and the Caucasus. “Posters of the Soviet East: 1918-1940,” which opened this month, features 241 original propaganda placards that targeted the Muslim lands of the former Soviet Union with exhortations on public health, industrialization and class consciousness.

The 1920s saw an unfettered flowering of creativity in these regions, especially among Russian-trained artists based in Tashkent and Baku. While central publishing houses in Moscow and Leningrad were shifting to Socialist Realism, artists in the periphery continued the avant-garde movement, combining it with local traditions, according to the exhibit’s curator, Maria Filatova. She sees the colorful posters from the 1920s and early 1930s, with their longer texts and multiple figurines, as direct decendents of local calligraphy and miniature traditions.

Filatova feels the relative freedom of the 1920s makes the work from that decade artistically more interesting compared to what followed. The work is also revealing about that period in early Soviet history, when “socialist ideas coexisted with Islamic ideology.”

“It was quite wise for the new Soviet power not to crush the old traditions, not to anger the region’s Muslim population. There are several posters from the 1920s where you can see the Soviet red star and the Muslim crescent together,” Filatova told EurasiaNet.org.

Thematically, of course, the collection contains urgings to build socialism and boot out the bourgeoisie, but some posters feature more matter-of-fact topics. The Oil Safety Institute of the USSR in Baku designed and printed a poster demonstrating how to safely lay coils of rope. Another poster warns of the dangers of malaria; yet another instructs mothers to stay at home for at least seven days after giving birth. One poster printed in Tashkent in 1934 urges everyone to learn how to play chess.

Some of the themes are familiar. The exhibit includes about a dozen posters in Uzbek from the early 1930s entreating members of collective farms to sow cotton. That will sound familiar today in Uzbekistan, where students, teachers and doctors are forced into the cotton fields each year at harvest time. By the 1930s, artists “understood that short texts and larger figures were easier for the broader population to understand,” Filatova said. What followed was “blunter ideological content.”

One of the most striking features of the posters overall is the variety of alphabets. Azeri, Kyrgyz, Tatar and Uzbek, among others, appear in Arabic script in the 1920s and then Latin in the 1930s.

Before the coming of the Soviets, few outside the region’s urban intelligentsia and clergy were literate. They wrote their languages using Arabic script. But by the time the Bolsheviks had consolidated power in the late 1920s, Moscow began a literacy drive using modified Latin scripts.

Partially this allowed the atheist Soviet system to separate Central Asians from the clergy and sever ties with the rest of the Muslim world. Some intellectuals at the time also argued that the Arabic alphabet did not adequately convey the Turkic languages’ vowel harmony and thus impeded literacy efforts. Mustafa Kemal Ataturk made a similar argument during his Latinization drive in the Turkish Republic around the same time.

The shift to Latin took hold by the late 1920s. Tajik, a Persian language, also used the Soviets’ Uniform Turkic Alphabet. Historian Mark Dickens, who says Latin letters were viewed in Central Asia as “culturally neutral,” has written that “by 1935, a total of seventy Soviet languages (not all of them Turkic), representing 36 million people, were being written in the Latin alphabet, modified by diacritics where needed.”

Examples of Tajik and Kyrgyz written in Latin letters can still be seen on some buildings built in the 1930s in Dushanbe and Bishkek.

The experiment with the Latin alphabet was short-lived. Some believe Soviet leader Joseph Stalin thought implementation would help efforts to spread communist ideology internationally, especially to Turkey. When it became clear the ideology was not spreading, and that use of Latin letters even presented a potential threat, by 1940 Moscow switched the languages to Cyrillic.

“With the demise of the Latin alphabet, a potential bridge for pan-Turkic ideas to travel from Turkey into the Soviet Union had been removed,” writes Dickens. “Furthermore, most significantly of all, the Russian alphabet would facilitate the incorporation of more Russian words into the Central Asian languages as well as making it easier for the people to learn the Russian language.”

“Posters of the Soviet East” was organized by the Mardjani Foundation, which sponsors research and cultural programs focusing on the Muslim populations of the former Soviet Union, and the State Central Museum for the Contemporary History of Russia. The exhibit, accompanied by a full-color catalogue, runs at the museum through October 6.