Officials argue that the flag has the power to sow public unrest and propagate terrorist activities. 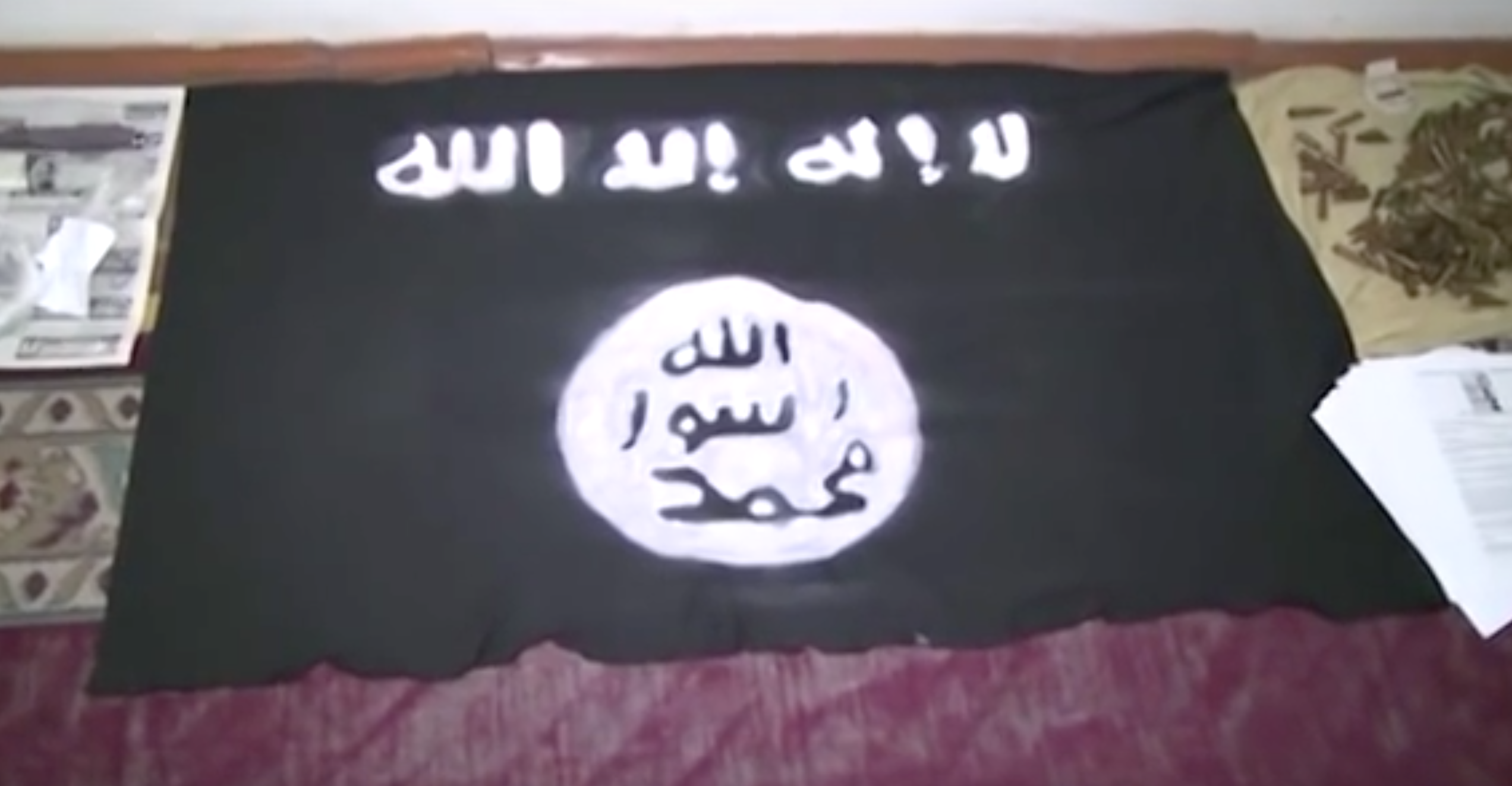 A screengrab of a Kyrgyzstan state TV report purporting to show an Islamic State flag recovered after a gunfight in central Bishkek in July 2015.

A curious little drama has played out in Tajikistan that neatly encapsulates the state’s relation to would-be terrorist symbols and how the government perceives — or wishes the public to perceive — the ways in which extremist religious beliefs can take root in society.

It began in the middle of February, when a foreign-based media outlet claimed that the authorities had detained one Nusratullo Saidov, a nephew of the founder of the banned Islamic Renaissance Party of Tajikistan, or IRPT, on suspicion of being in possession of a clutch of Islamic State flags. Within a few hours, Saidov issued a video statement, looking understandably shellshocked, denying he had been detained, but confirming that flags had indeed been found at a building in which he works, in the Vakhsh District of southern Tajikistan.

Some days later, on February 28, the main state TV channel, Tojikiston, ran an item on the evening news citing the State Committee for National Security as saying that it had caught the culprit. Kurbonali Partoyev, a 31-year old acquaintance of Saidov's, appeared on camera in the report admitting to producing and planning to deploy five Islamic State flags. For reasons unexplained, Partoyev appears to have fallen out with Saidov and planting the flags was his attempt to take revenge for some prior slight.

In the context of Tajikistan, this goes far beyond a grotesque but ultimately harmless prank, since being found in possession of the flag can incur severe penalties. And the Tajik government is very far from being alone in endowing the militant group’s black standard — which includes a stylized circular white shape imprinted with the Koranic verse “Muhammad is the prophet of Allah” — with almost mystical properties of inspiration.

Former British Prime Minister David Cameron warned in an August 2014 article that “if people are walking around with [Islamic State] flags … they will be arrested and their materials will be seized.” Other European nations have either adopted or mulled similarly hardline policies.

Few have taken this quite as seriously as Tajikistan. In February 2016, a court in the Khatlon region sentenced a group of 13 men to prison terms of between 10 and 25 years for raising an Islamic State flag in the center of the town of Nurek, around 70 kilometers southeast of the capital, Dushanbe. According to investigators, the group agreed to the stunt in a gesture of loyalty to an Islamic State fighter they had met online. One of the accused, Davliyo Saidov, reportedly explained to his interrogators that he bought the black fabric and white paint while visiting Dushanbe, in compliance with the militant’s instructions.

“At the time I suspected nothing, but now I am beginning to think that it is as if he hypnotized us,” Saidov said.

Another three men, residents of a village near Nurek, were arrested on suspicion of engaging in a similar escapade in June 2015, when they were said to have planted an Islamic State flag on a mountaintop. The trio was charged with “public incitement to extremist activity” — presumably a reference to terrorism, not mountain-climbing — and in February 2017 they were sentenced to three years each.

It seems 2015 was a particularly bad period for this kind of thing. In November that year, 21-year old Dushanbe university student Davron Kurbonov was arrested on suspicion of hanging the flag off a bridge on the western approach to the city. He was later sentenced to six years in prison. In making their case, investigators said that Kurbonov, who worked in an internet cafe, used to watch Islamic State propaganda videos and encouraged others to do the same.

Supporters of the no-nonsense approach describe the authorities actions as efficient and life-saving interventions.

“On this occasion, the timely actions pursued by law enforcement officials have succeeded in neutralizing the activities of newly surfaced Islamic State supporters and in preventing tragic events,” wrote one commentator, who signs under Karim Dovudov and specializes in fear-mongering pieces about the dangers of political Islam and supposedly Western government-backed terrorism.

Tajik security officials have also accused the IRPT, which was proscribed in 2015, as attempting to “destabilize the situation in various regions of the country by using the black Islamic State flag.”

The black flag-mania extends to neighboring countries too.

Also in 2015, in April, it was reported that leaflets carrying images of the black standard were found pasted on the walls of schools and a college in the village of Khisarak, in the Tashkent region. According to one media account, troops and armored vehicles were immediately dispatched to the village, which was placed under a nighttime curfew.

A few months later, there were similarly breathless reports of widespread arrests in the city of Bukhara after a local resident spotted black flags hanging from a high-voltage transmission tower. Witnesses said it took police officers a long time to take the flags down.

“They say it wasn’t just one flag, but several. They might be exaggerating. But that there was one flag, that’s for sure,” one resident told a correspondent for Moscow-based Ferghana news agency.

The authorities have taken a dim view of such tittle-tattling, however.

In December 2015, a high-ranking police official was moved to condemn what he described as rumors that “could sow panic and fear.” Uktam Murodov, head of the Interior Ministry’s antiterrorism section, warned at the time that people who spread such talk were themselves undermining public order and would be dealt with robustly.

The official position in Kyrgyzstan, meanwhile, is to actively embrace the appearance of the Islamic State flag as vindication of their supposed anti-terrorism policies.

Perhaps the most striking appearance of the standard came in July 2015, following an hours-long gun battle between government special forces and an armed gang holed up in a house in the center of the capital, Bishkek. The confrontation, which saw multiple kevlar-wearing troops deploying rocket-propelled grenade launchers, culminated in the death of several gang members and the total destruction of an entire building. Despite the gang’s safe-house bursting into flames so fierce that even the homes of blameless neighbors were burnt to the ground, officials the following day released footage purporting to show a completely pristine Islamic State flag found on the premises. That constituted about the entirety of publicly available evidence linking the men to terrorism.

The Islamic State flag made an even more improbable appearance some months later, in the wake of a mass escape of prisoners from a detention facility outside Bishkek on October 11. One fugitive, Edil Abdrahmanov, was eventually captured around 10 days later. In footage of the capture produced and circulated by security officials, Abdrahmanov was shown groaning in the mud with the black flag stretched out next to him. The implication being that despite being on the run, Abdrahmanov, who had been serving a sentence on charges of belonging to Jaysh al-Mahdi, a Shia militant group with roots in Iraq, took the trouble to somehow procure and carry around a flag devised by an extremist Sunni Muslim group.

The abiding conundrum is whether these governments genuinely adhere to the belief that the Islamic State banner contains mystical powers of ideological transference or if they simply find the flag to be a useful shortcut to criminalize individuals they don’t like and sow generalized anxiety about some vague terrorist threat.

The case studies above point to a spectrum of positions.

Tajikistan is indeed serious about flags and has developed something of an adulatory cult to the national white-green-and-red. Dushanbe’s most distinctive and visible landmark is the 165-meter flagpole and the country even has a national holiday devoted to the national flag. Whether or not the specific cases that have been described occurred quite in the way officials insist they did, it is hardly a matter of dispute that Dushanbe believes in the power of symbols.

That case could be made even more forcefully for Uzbekistan, which has sought on occasion to deny — possibly quite truthfully — claims of the random appearance of Islamic State flags. Even the idea that the symbol might have been seen somewhere is enough to strain the nerves.

Kyrgyzstan is markedly superficial about the whole matter. Their security services make casual use of the symbol to persuade the public that would-be militant ideologues are murderously and suicidally fanatical about their devotion the black flag and that they therefore constitute an imminent danger to society. Meanwhile, their utterly confused system of classifying militant groups allegedly active in the country shows they do not especially care about ideological content.