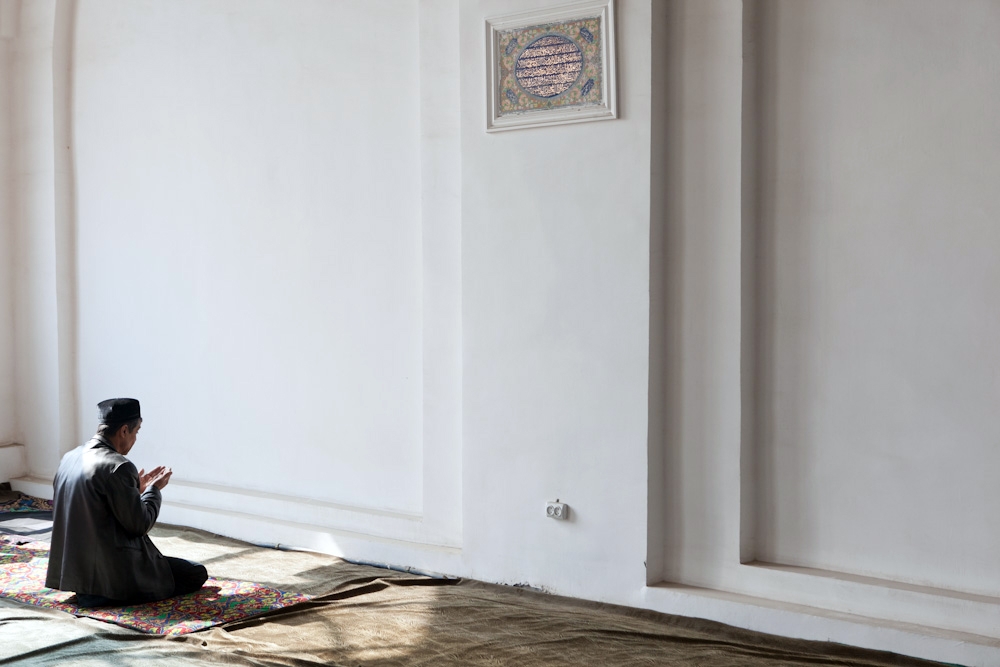 Analysts agree that some Kyrgyz Muslims are fighting in Syria, but about how many is unknown. (Photo: David Trilling)

Security officials in several Central Asia states are playing up the threat posed by Islamic militants returning to the region from Syria. While authorities warn of potential problems ahead, analysts are struggling to assess the real risk level.

Official expressions of concern have increased since February 14, when Kyrgyz law-enforcement personnel took six suspected militants into custody. Intelligence officials asserted that the suspects had received training in “international terrorist organizations’ camps in Syria,” and had been planning to carry out attacks in Bishkek, the capital, and Osh, Kyrgyzstan’s second city. The incident bore similarities to another reported plot that was disrupted last fall. In that instance, two Kyrgyz citizens and one from neighboring Kazakhstan were supposedly prevented from blowing up targets in Bishkek and Osh. The trio was said to have trained for the terror mission in Syria.

Meanwhile, officials in Tajikistan have just revealed an alleged link between the beleaguered Islamic opposition and Tajik militants in Syria. One Bakhriddin Muminov -- identified as a member of the Islamic Renaissance Party of Tajikistan (IRPT) and reportedly related by marriage to its late founder, Said Abdullo Nuri -- was handed a jail sentence in Tajikistan back in December for fighting on behalf of the Syrian rebel cause, officials said on February 14.

Intelligence agents did not specify their motivations for suddenly divulging the information, raising suspicions that the announcement was a bid to discredit the IRPT, which is the only legal Islamic party in Central Asia and is operating under increasing government pressure.

Regional experts identify socioeconomic disaffection and crackdowns on Islam that drive pious Muslims into the arms of extremists as factors driving the radical agenda in Central Asia.

“A majority of Central Asian government officials are secular men who have retained Soviet-era precepts on how the state should deal with religion,” Alisher Khamidov, an independent researcher based in southern Kyrgyzstan, told EurasiaNet.org. [Editor’s note: Khamidov has been an occasional contributor to EurasiaNet].

“Soviet officials viewed religious practices with suspicion and had a strong penchant to control clergy,” he added, and nowadays, “officials often conflate two separate trends: a rise in religiosity and religious extremism.”

The intelligence services of Kyrgyzstan and Tajikistan are playing up the risks posed by hardened radicals returning from Syria – as well as their own successes in containing them. Analysts are more cautious when trying to evaluate the potential for trouble.

The problem of Central Asian militants heading for Syria does exist, agreed Yerlan Karin, a Kazakhstani analyst specializing in security issues, “but at the same it must be noted that the scale is somewhat exaggerated.”

There was consternation in Kazakhstan last fall when a video surfaced online purporting to show an extended Kazakh family numbering around 150 people that had moved to Syria ostensibly to participate in what was portrayed as a holy war. The video included soft-focus shots of babies rolling around on Kazakh-style carpets; footage of a child aged around 10 singing in Kazakh about demolishing Satan; and clips of young men cradling assault rifles waxing lyrical about jihad.

Another Central Asia-linked Syrian war propaganda video surfaced this month, showing a small boy aged around four, claiming to be from Uzbekistan, firing rounds from an assault rifle then warning, in Arabic, that “infidels are going to be slaughtered.”

Uzbekistani officials have not reacted, and in Kazakhstan the intelligence service tends to play Syria-related threats down rather than up. Nevertheless, militants suspected of fighting in Syria’s civil war are being brought to trial, with four alleged radicals currently in the dock in Ekibastuz in northern Kazakhstan on terrorism charges.

Kazakhstan’s security service believes around 100 citizens are fighting abroad. Security officials have previously indicated they assume most are in nearby Afghanistan. Some experts believe that some Central Asian jihadis in Afghanistan may be moving on to Syria as the Afghan war winds down.

Estimates for numbers of Central Asian radicals in Syria vary widely. Research published last December by the International Centre for the Study of Radicalisation, based at King’s College London, calculated 14-150 fighters from Kazakhstan; 9-30 from Kyrgyzstan; and a dozen or less from the other states.

But last October, Syria’s grand mufti Ahmad Badreddin Hassoun raised eyebrows with elevated estimates of 250 militants from Kazakhstan; 190 from Tajikistan; and 360 from Turkmenistan. That data was quoted by Russia’s Imperial Orthodox Palestine Society, a charitable organization with strong ties to the Russian government – which is Syrian President Bashar al-Assad’s most vocal international backer.

Russian media have also played up Central Asian threats. Last September pro-Kremlin Rossiya 24 TV broadcast footage of one Ravshan Gazakov, allegedly a Turkmen citizen arrested fighting in Aleppo. The Russian-language overlay of his comments in Turkmen said he trained in a terrorist camp near Ashgabat – a sensational claim dismissed by regional security experts as preposterous.

While the threat of regional radicalism exists, it should not be overplayed, Khamidov says: “Radical religious ideas have adherents in many parts of Central Asia, but religious extremism is not a major security risk.”

The scale of the problem may be limited, agrees Karin, “but that does not mean there is no problem -- there is one, and it is of a serious nature.” Even if only a handful of Central Asian radicals are waging jihad abroad, “we should establish what impelled them and what they are striving for.”