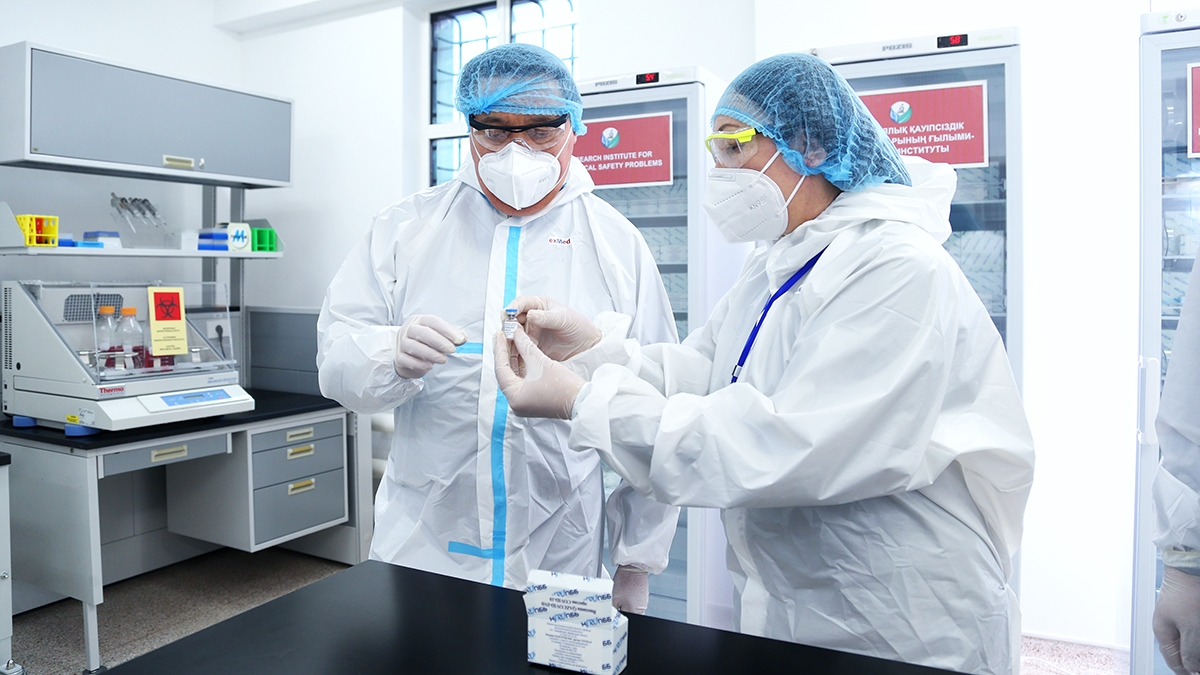 The rollout of COVID-19 vaccinations across Central Asia is set to be slow and far from exhaustive.

And yet, if official figures are to be believed, this may not be a catastrophe. But are the figures reliable? That remains something of a mystery.

Kazakhstan, the richest country in the region, has a multi-pronged vaccination strategy.

In mid-December, the government announced it had completed the first and second phases of clinical trials of a locally developed vaccine, dubbed QazCovid-in. A more significant third phase is said to have begun and officials are optimistically predicting the population could start getting shots before too long.

“Mass vaccination with the domestic vaccine will begin in March 2021,” Prime Minister Askar Mamin has said.

Some of the dates and figures bandied around by Mamin defy belief, though. He has said a plant producing QazCovid-in will already be up and running in March and will be able to produce more than 60 million doses annually.

Meanwhile, another facility, in the central city of Karaganda, will be responsible for manufacturing Russian-developed Sputnik V, deputy Health Minister Marat Shormanov said in December. Russia has agreed to supply Kazakhstan with the makings of 2 million doses to the Karaganda plant.

Results of a quality analysis of batches coming from the Karaganda plant are expected by the end of January. If the vaccine is found to be safe, health authorities will begin administering the shots in February.

Health Ministry plans are to initially vaccinate 10 million people between ages 18 and 60, equivalent to 55 percent of the overall population. No timeframe has been provided for this plan. Other age groups will be administered shots once the vaccinations are deemed to be entirely safe for them, officials have said.

As for the better-known foreign vaccines, the situation is complicated.

“Conditions for storage and transportation of the Pfizer vaccine are very tough, which significantly complicates its transportation and use in our country,” Shormanov has said. The Health Ministry all the same told reporters this week that it is in negotiations with Pfizer on sourcing its vaccine, but it said that it was not yet sure how many doses it wants to buy.

Kazakhstan adhered to the global vaccine-sharing mechanism known as COVAX in August, but it has indicated it is not holding out much hope there.

Uzbekistan signed up to the COVAX program in August. Last month, a senior health official said Tashkent is banking on ordering 2 million doses of vaccine through the initiative.

But Uzbekistan has other coals in the fire. In December, it began its involvement in the third phase of clinical trials for a vaccine being developed by Chinese company Anhui Zhifei Longcom Biopharmaceutical. It is presumed a supply of the same vaccine would be forthcoming if the results are positive.

Russia has pledged to supply 1 million doses of Sputnik V to inoculate prospective migrant laborers. Uzbekistan is also in negotiations with another Russian drug-maker, Vector, which is at the moment working on development of its EpiVacCorona vaccine.

What is not clear is how officials were able to state in November that they intend to see 60 percent of the population vaccinated by the middle of 2021. Although officials were widely reported as having made that forecast, all references to the 60 percent figure seem to have been scrubbed from government websites.

The overall epidemiological picture in Kazakhstan and Uzbekistan looks generally rosy in relative terms, though, if compared to the disasters that have befallen many Western European countries, not to speak of the United States and Russia.

As of mid-January, there were around 11,500 active cases in Kazakhstan. That is no small number, but compared, for example, to the almost 565,000 cases in Italy, which has a population three times greater than Kazakhstan's, it is modest. As for Uzbekistan, authorities are currently claiming to have only about 900 active cases – a drop in the ocean for a population of more than 33 million. Uzbekistan has even been closing facilities created specifically to cope with the COVID-19 crisis.

The credibility of such upbeat assessments is difficult to confirm or disprove, however.

Tajikistan has gone further yet in claiming victory over COVID-19. While delivering his New Year’s greetings, President Emomali Rahmon claimed that the coronavirus had almost entirely disappeared. As if to live up to that boast, health authorities have reported only a dozen new cases so far this year.

From the very start of the outbreak, however, Tajik health officials have played fast and loose with such facts as they possessed. The testing regime is weak and medics have throughout the crisis been strongly pressured to refrain from giving bad news.

Dushanbe still plans to pursue a vaccination program. Navruz Jafarov, the deputy head of the State Sanitary and Epidemiological Surveillance Service, said last summer that the government was negotiating with Russia for assistance on this front.

The Tajik government has made a request for 1.8 million doses of vaccine through the COVAX initiative, a Health Ministry source told Eurasianet.

“For us, the main condition for the purchase of vaccines is that it be recognized by the World Health Organization and that it can be transported to Tajikistan,” the source said.

This is a concern for most countries in the region. The Pfizer and Moderna vaccines in particular present acute logistical challenges in that they need to be kept in the kind of ultra-cold storage facilities that poor countries like Tajikistan and Kyrgyzstan lack. Even in relatively wealthy Kazakhstan, the quality of medical facilities drops off rapidly the further one travels from major urban centers.

Kyrgyzstan’s Health Ministry is already going through the process of certifying vaccines produced by Pfizer and Germany’s BioNTech. It said on January 10 that it had received samples from the two companies under the auspices of its involvement in COVAX.

The Kyrgyz government has put in an order for 1.2 million doses of vaccine through COVAX.

That would be enough to provide for around one-fifth of the population, so Kyrgyzstan, like all others in the region, is hoping that Russia will come through with supplies of Sputnik V.