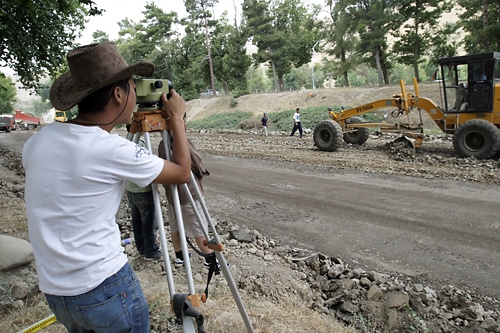 Chinese investment in Central Asia has focused on a policy of extracting resources and exporting goods. (Photo: David Trilling)

China is increasingly active in Central Asia, building pipelines and infrastructure projects, as well as expanding its diplomatic and cultural presence in the region.

At the same time, Beijing is shoring up its control over Xinjiang, the restive province that borders formerly Soviet Central Asia, relying on ambitious development projects, encouraging settlement by China's majority ethnic Han, and acting aggressively to contain expressions of indigenous Uyghur nationalism.

But it has been difficult to divine the main motivation in China's so-called Western policies. Scholars and analysts studying China's activity in Central Asia differ on what is the driver: whether the effort to pacify Xinjiang is intended to build that region into a secure platform from which to expand economically into Central Asia, or the opposite – that Beijing is building up its Central Asia ties in order to more strongly bind Xinjiang to the rest of China.

The most notable Chinese projects in Central Asia have been pipelines, especially a natural gas pipeline from Turkmenistan. China also is working to improve transportation networks in the region, building new roads and tunnels, for example, in Tajikistan. In addition, it has provided low-interest loans to Central Asian countries in the wake of the recent financial crisis, and has sought to increase educational and cultural contacts.

But what China's goal is with these projects remains opaque. Part of the reason is that Central Asia remains a low priority for the government in Beijing, and so policy is shaped on an ad hoc basic via deals made by various companies and government organs, said Alexandros Petersen, an analyst and fellow at the Woodrow Wilson Center who studies Chinese policy in Central Asia. “There is no grand strategy for Central Asia on the part of Beijing,” Petersen said. “What there is, however, is a confluence of all the activities of these multifarious actors which, regardless of what Beijing wants or doesn't want, means that China is nonetheless the most consequential actor in the region.”

In some ways, China's ties with Central Asia resemble those that it is building in Africa and Latin America, with a strong focus on resource extraction. Beijing's strategy toward Central Asia “may be a reflection of China's larger strategy toward the external world, which involves a lot of natural resources coming in and a lot of trade going out,” said Sean Roberts, a professor at George Washington University and expert on Central Asia. “And Central Asia is just a perfect storm,” given that it is both rich in natural resources and a key to exporting goods as the first leg on westward transportation routes that China is working on building.

But other analysts argue that, in the case of Central Asia, that energy extraction focus is secondary compared to the need to pacify Xinjiang. “The stability of East Turkestan is the most significant, both in terms of attracting foreign direct investment, or any kind of investment, to the region or providing a safe ground for trade and international economic interactions,” said Kilic Kanat, a political science professor at the University of Pennsylvania at Erie. (East Turkestan is the name some use to describe Xinjiang). “Yes, the stability of the region will contribute to the global economic perspective of China, but ... they feel they need to put their house in order first.”

China's strategy of pacifying Xinjiang and quelling separatist movements there has been rooted in economic development. But it has not worked out as originally envisioned because Uyghurs' dissatisfaction has to do with cultural and political rights, rather than economic issues, and because economic development in any case has only widened the wealth gap between Uyghurs and the Han Chinese, Kanat said.

Nevertheless, China's strategy towards Central Asia may be a function of its need to pacify Xinjiang, Petersen said: “The engagement in Central Asia ... has to do with security concerns about Xinjiang, number one, and only secondly, after that, is it about resources and economic development.”

Kanat, Petersen and Roberts all spoke at an event on December 13, “Borderlands, Development and Indigeneity: China in South, Central, and South-East Asia,” held at George Washington University in Washington, DC.

Joshua Kucera is a Washington, DC,-based writer who specializes in security issues in Central Asia, the Caucasus and the Middle East. He is the editor of EurasiaNet's Bug Pit blog.