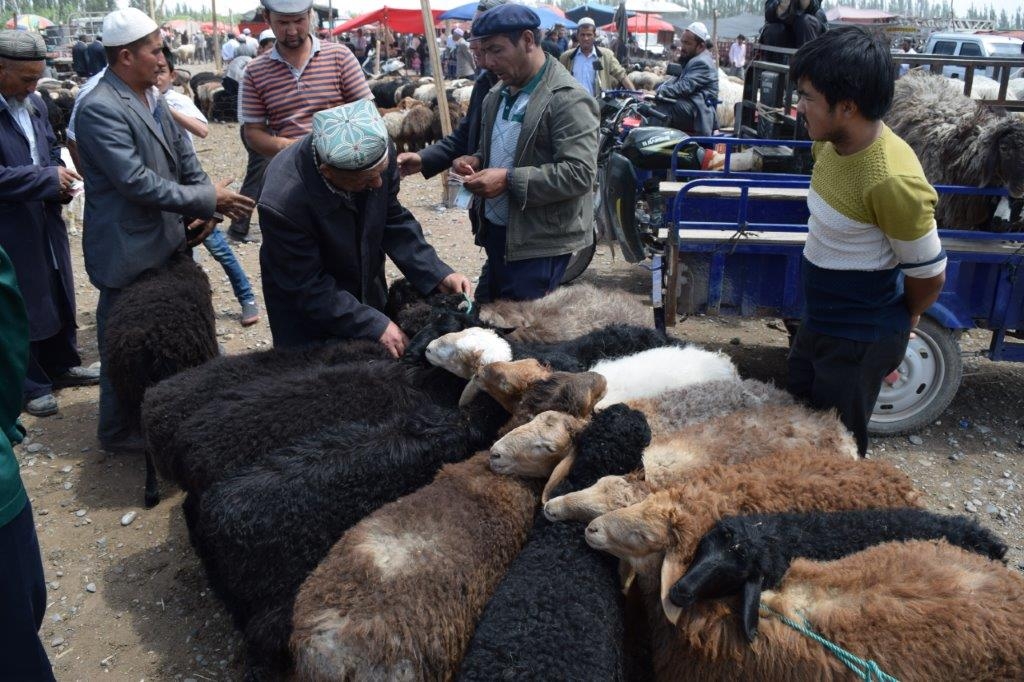 The Pamir Mountains served as a natural boundary between two old empires – Chinese and Russian. Stretching for hundreds of miles, and reaching an elevation of 7,500 meters (24,000 feet), the Pamirs are so remote that, even in this era of globalization, few travelers ever reach this corner of the world.

In old Persian, Pamir can be translated as “the feet of the gods.” The terrain, however, is harsh, not heavenly, featuring a desert-like landscape. A visitor is perhaps more likely to encounter ibices (mountain goats) or marmots than see a fellow traveler.

Those who call the Pamirs home are mainly nomads who live in yurts as they move their yak herds around seasonal pasturelands.

Today, a not-so-imposing fence marks the actual boundary between the former Soviet republics of Tajikistan and Kyrgyzstan on one side and the Xinjiang Autonomous Region of China on the other. To visit the Gorno-Badakhshan Autonomous Region on the Tajik side, foreigners are required to obtain a special permit from the government.

The Pamir Highway – prosaically marked on maps as M41 – runs through the region. Its main purpose is to facilitate the transit of consumer goods from China to Central Asian markets. Where it crosses international frontiers, the road is of good quality, Chinese engineers having overseen the construction. But much of the highway is unpaved.

It takes several days to journey from the Tajik capital, Dushanbe, to Kashgar, the westernmost urban center in China. The distance is not so great, around 400 miles (600 kilometers), but the altitude and poor road quality makes for slow travelling. Through the borderlands, there is little traffic apart from long-haul trucks – and not so many of them.

Even the border posts are remote, like high altitude oases, and covered by snow for much of the year. Direct access to Tajikistan from China involves crossing the Korasu Pass at 4,363 meters. Most trucks prefer to cross first into Kyrgyzstan along a newly-built road that climbs just above 3,500 metres. There is a two-mile gap between the Chinese and Kyrgyzstan border posts. Trucks can be held up for hours or even days for inspection.

As they cross into China, drivers adjust their watches by two hours. All of China operates on Beijing time, even though Kashgar – the nearest city on the Chinese side – is 2,100 miles (3,400 kilometers) west of China’s capital Beijing, almost the same distance as it is from Moscow to the west.

Kashgar was once linked to the Central Asian cities of Dushanbe and Tashkent by the ancient ‘Silk Road.’ Culturally there is a lot in common between the peoples of the region. The Uighur inhabitants of Xinjiang speak a Turkic language closely related to Uzbek and Kazakh. Yet the contrast between the two sides of the Pamirs is stark, giving the feeling that you are crossing, if no longer between empires, certainly between continents – from China to the mainly Turkic world of Central Asia.

The crossing to Kyrgyzstan is one of two main ways for Chinese goods to enter the former Soviet states of Central Asia. The other goes north from the Xinjiang capital, Urumchi, to Kazakhstan. A pipeline also brings Turkmen gas to China via this route.

China’s trade with Central Asian states is relatively small, but Beijing has grand plans to develop these two transit points into major trade routes to Europe, under its so-called One Belt, One Road (OBOR) vision. For now, though, these roads remain some of the remotest and least crossed frontiers in Asia.

In the 19th century, amid the geopolitical jockeying between Russia and Britain widely known as the Great Game, Kashgar was a hub of intrigue and espionage. The city’s distinctive character has faded, however. Migration by Han Chinese in recent decades has diluted the Uighur majority in western regions of China, and Kashgar is taking on the modern appearance of other Chinese cities.

During the mid-20th century, these borderlands were a potential flashpoint of confrontation after China and the Soviet Union experienced an ideological split. But that tension has long ago dissipated. These days, the borderlands have little traffic and are regarded almost as an afterthought. These remote regions of Central Asia, lacking in natural resources and arable land, provide little reason for anyone to fight over them.

Nicholas Nugent is a writer and broadcaster specializing in Asia and the former Soviet Union.