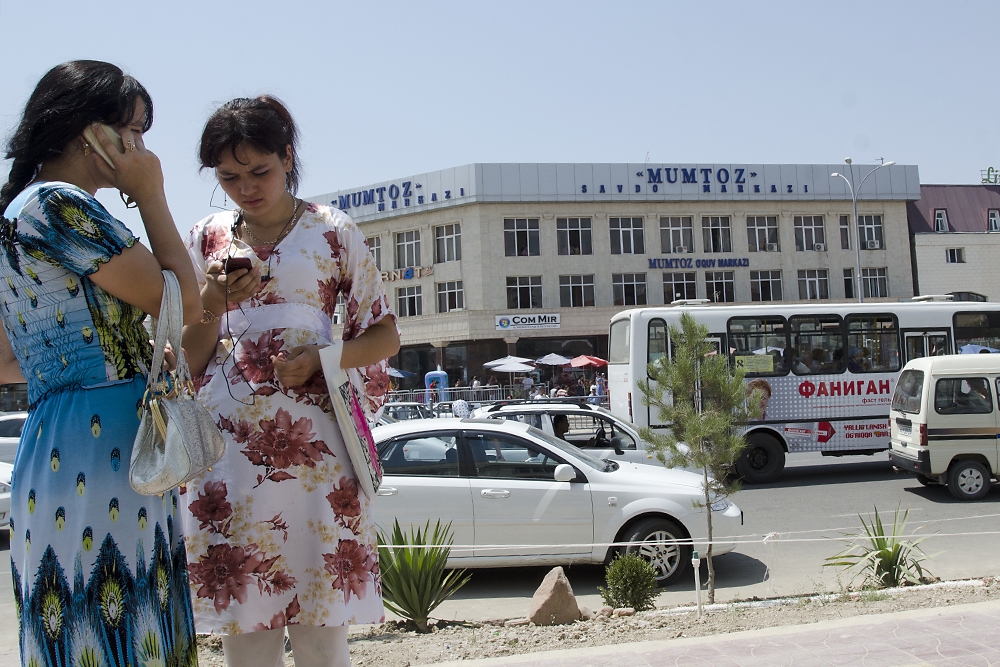 Young women in Andijan, Uzbekistan, use their mobile phones to call and send messages in July 2013. While smart phone users in most Central Asian countries and Russia choose WhatsApp as their primary messaging app, Uzbekistan users find the app slow and cumbersome, which many believe is due to government attempts to intercept the digital traffic. (Photo: Dean C.K. Cox)

When it comes to messengers, the preference in Kazakhstan is for WhatsApp. According to marketing company Mobile Media Kazakhstan, there are around 1.1 million users of the service in the country.

Research by Internet analytics company SimilarWeb yielded similar findings and placed WhatsApp at the top of the popularity rankings for Android-based devices in Kazakhstan, Russia and Kyrgyzstan as well. In Uzbekistan, however, it is Telegram that leads the pack.

The popularity of this technology has prompted local developers to come up with their own versions.

The robust health of the communications market in Kazakhstan has made the prospect of cashing in on the app bonanza an enticing one. Government figures show that there were 31.4 million phone SIM cards registered in Kazakhstan in 2015 — a huge amount for a population of around 18 million. Many buy two SIM cards to take advantage of preferential intra-network call rates — if a caller wants to save money, they use the same mobile phone provider as the person they are phoning.

More than 60 percent of mobile phone owners have sets capable of getting online. And research shows that mobile subscribers are making ever less use of voice and SMS services and relying instead on messengers and social media websites, which makes communicating far cheaper.

Figures from leading mobile phone company KCell are telling. In 2015, the company’s revenues from voice services dropped by 20.6 percent year-on-year, to 105.3 billion tenge ($316 million). Over the same period, data services generated an extra 18.6 percent in revenue on the previous year, to 39.3 billion tenge ($118 million).

In a bid to capitalize on that trend, a government-backed group of developers in November 2014 launched the iTys app. The layout and properties were almost identical to WhatsApp though, so the only real distinctive elements were the Kazakh-themed colors, language interface and emoticons.

“iTys is the latest word in Kazakhstani IT,” app developer Daut Shaihislamov said at the time of the launch. “We are certain that the launch of our project is another important step in the development and popularization of the state language and of Kazakh culture.”

Shaihislamov tried to sell his app as hacker-proof, but that does not seem to have convinced many.

One widespread concern is over privacy and the conviction that local developers are more liable to share data with the domestic security services. Backing for iTys came from President Nursultan Nazarbayev’s State Language Development Fund — a fact that suggests that the developers’ loyalty ultimately lie with the state rather than the user.

“I would not really trust new and little-known messaging services,” said Mirlan Telebarisov, a public relations specialist from Almaty. “I am not particularly concerned about how nice the smileys look, but more about security, especially since we store so much confidential data in our smartphones.”

Shaihislamov said that the iTys app was downloaded by more than 150,000 people, but users have reported little uptake among their peers, suggesting the messenger has been far from a success.

Another Kazakhstani messaging app, Salem, was developed with assistance from a local innovations-focused investment fund. The creators of the app, which was launched in 2015, cited confidentiality as a prime selling point.

“Encrypting and de-encrypting of data takes place on the users’ devices and without the involvement of third parties,” the developers said.

Results have been disappointing there too, however. Google Play figures show the app being downloaded a mere 1,000 times. If iTys did any better, it was likely because of the active support of the government in promoting the app.

In Kyrgyzstan, the creators of a messaging app by the name of Pager are trying to break the mould by aiming their product at a more niche market. App developer Daniyar Arzymatov told EurasiaNet.org that along with providing regular messaging capabilities, Pager can serve as a platform for tracking work tasks.

“We are working on business-related functionality, which you do not have in WhatsApp. We have our own niche, in which we see businessmen and managers,” Arzymatov said.

Arzymatov said the goal is to monetize the app by building in paid services into the premium version.

Pager is still in beta, but will soon be released onto the wider market, Arzymatov said.

In Uzbekistan, the local affiliate of Russian mobile company Beeline dipped its toe into the messenger market with Va4ach. Again though, privacy issues have drastically crimped the app’s appeal.

“Uzbeks are convinced that anything made inside the country is controlled by the government,” said one industry insider, who asked to remain anonymous. “That is why nobody uses Va4ach.”

WhatsApp itself has had a troubled fate in Uzbekistan, where authorities look with suspicion on all means of communication designed to circumvent snooping by state bodies. The quality of the service dropped sharply in 2013 — it is assumed because of government attempts to intercept the traffic —and users found it took intolerably long periods of time to load pictures and videos. So it was then that Telegram took over.

IT market experts in Kazakhstan tend to consider the development of local messaging services a waste of time and money.

“I don’t even bother keeping a tab on these projects,” Konstantin Gorozhankin, director of Kazakhstan’s largest IT business incubator iStartUp.kz, told EurasiaNet.org. “It is like coming up with another Windows operating system. Messengers can only take off where there is a market. And that market has already been taken by existing messaging apps.”

Gorozhankin said that trying to compete with global brands was pointless and suggested instead that there was more scope for developing much more locally oriented software and websites.

One example of a popular app in Kazakhstan is one created by Ticketon.kz, an online service for buying and booking tickets for shows. More than 600 million tenge ($1.8 million) worth of tickets were sold through the service in 2015 — a huge figure by local standards.

“Experience shows that it is in the local market, which is not covered by global services, where the demand is greatest and where Kazakhstani project are showing growth,” Gorozhankin said. “Once you become a success on Kazakhstan’s 18-million strong market, you can start to think about transferring the business model abroad.”