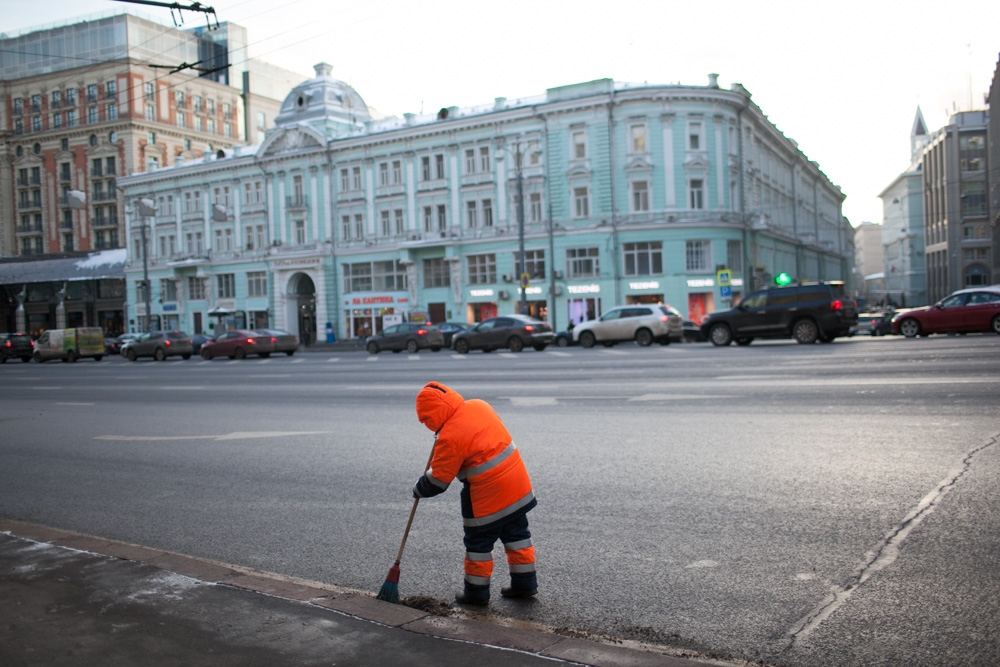 It’s February, so Muscovites are grumbling about their city’s slippery sidewalks. The complaint isn’t unusual in winter, but this year many say they know why everything is covered in ice: The “Tajiks” have left.

Russian media report that the collapse of the ruble and strict new rules for migrant laborers have encouraged an exodus of Central Asians. But preliminary numbers are far smaller than many Muscovites believe. Besides, new government hurdles can be overcome with a bribe.

The startling number often reported and repeated is 70 percent fewer labor migrants than last year. It dates back to January 7, from comments by the head of the Federal Migration Service (FMS), Konstantin Romodanovsky, who cited it as the decrease in arriving migrants year on year. But the comparison is of dubious statistical value, referring only to the first week of 2015, which falls amid Russia’s protracted winter holidays, and also happened to be the first week that the stringent new rules were in place. Nonetheless, even migrants quote the figure when asked for estimates of how many of their compatriots have chosen to leave.

Last week FMS offered more detailed figures. In January, compared with a year earlier, the number of Uzbek citizens in Russia fell 4.3 percent and Tajik citizens by 2.2 percent, according to the RBK business-news website. Yet the number of Kyrgyzstanis had grown by 3.8 percent. (Numbers showing departures in the second half of the year are misleading, as traditionally many migrants leave Russia each winter when seasonal work dries up.)

No doubt, economic factors are pushing Central Asians to weigh the benefits of staying in Russia. The country’s economy is expected to contract 4.8 percent this year, according to the EBRD. In the last 12 months, the ruble has already fallen 50 percent, slashing real wages and the money migrants send home.

In a covered market in Moscow’s Khamovniki District, a dried-fruit-and-nut seller from northern Tajikistan estimates his profit margins have shrunk 30 percent since last summer, even though he has upped his prices in rubles by 40 percent over the same period.

For now, like many others, he plans to keep trying his luck in Russia. If the ruble falls below 80 to the dollar – it has fallen from 33 to 67 in the last year – he will seriously consider leaving, he said. If it hits 100, he will definitely leave, and “eat bread instead of bread and butter.”

He thinks the overwhelming majority of migrants leaving Russia are laborers unable to find work or break even living in the expensive Russian capital. Traders such as himself enjoy a bigger cushion because they started with such huge markups, he explains.

New Russian regulations are also making migrants weigh their options. Since New Year’s Day, foreign workers have been required to take Russian language and history tests, and sign up for health insurance. They must also pay three times more than before for Moscow work permits. Some media have reported days-long lines and inefficient bureaucracies at processing centers.

Two Tajikistanis, speaking separately, claimed it is easier to pay a bribe. Both said the going rate for the necessary papers, including proof of passing the tests, was approximately 16,000-22,000 rubles ($239-$329). But even after that payout – equivalent to two to four weeks’ wages for many – migrants still must pay 4,000 per month for a Moscow work permit.

Confusion about the new rules abounds. Two middle-aged Uzbekistani janitors who have worked in the Russian capital for years insisted they do not need to take the exams because they were born before 1991. But FMS regulations require the exam for everyone from outside the new Eurasian Economic Union.

Also under rules adopted on January 1, citizens of Tajikistan and Uzbekistan may only travel to Russia on international passports. Kyrgyzstanis, another large migrant community, can continue using their national ID cards, however, because their country is scheduled to join the Russia-led EEU in May.

In fact, statistics suggest the EEU is encouraging migration to Russia. According to the FMS figures, the number of Armenian nationals in Russia grew 10.2 percent; Belarusians are up 32.6 percent; Kazakhs 4.5 percent. (Armenia joined the EEU on January 2; Kazakhstan and Belarus, along with Russia, were founding members.)

Migrant-rights activists say it is too early to make conclusions, but some expect the floundering economy and new regulations to encourage 20-25 percent of migrants to leave. The true test will be in the spring, when Central Asian workers traditionally flock to Russia to find work in construction, an industry that seems certain to be hurt by Russia’s fast-shrinking economy.

The real scale of the changes in migrant figures – just like the real numbers of Central Asian migrants in Russia overall – is hard to gauge. Some agencies count apples, some count oranges, and it is not clear if anyone’s numbers take into account Central Asians traveling on Russian passports, of which there are plenty. (In absolute terms, estimates of Uzbek nationals, for example, vary from 2.5 million to 5 million. Estimates of Kyrgyz and Tajik citizens tend to hover around a million each.)

Despite the new challenges, several Central Asians working in Moscow argued that they have little choice but to stay because there are few jobs at home.

The fruit-and-nut seller from northern Tajikistan expects a large number of his compatriots to continue trying their luck in Russia. “There are no jobs” in Tajikistan, he said. “If people all go home, they’ll be stealing from each other. They’ll have to come back. If they don’t, there will be another civil war.”