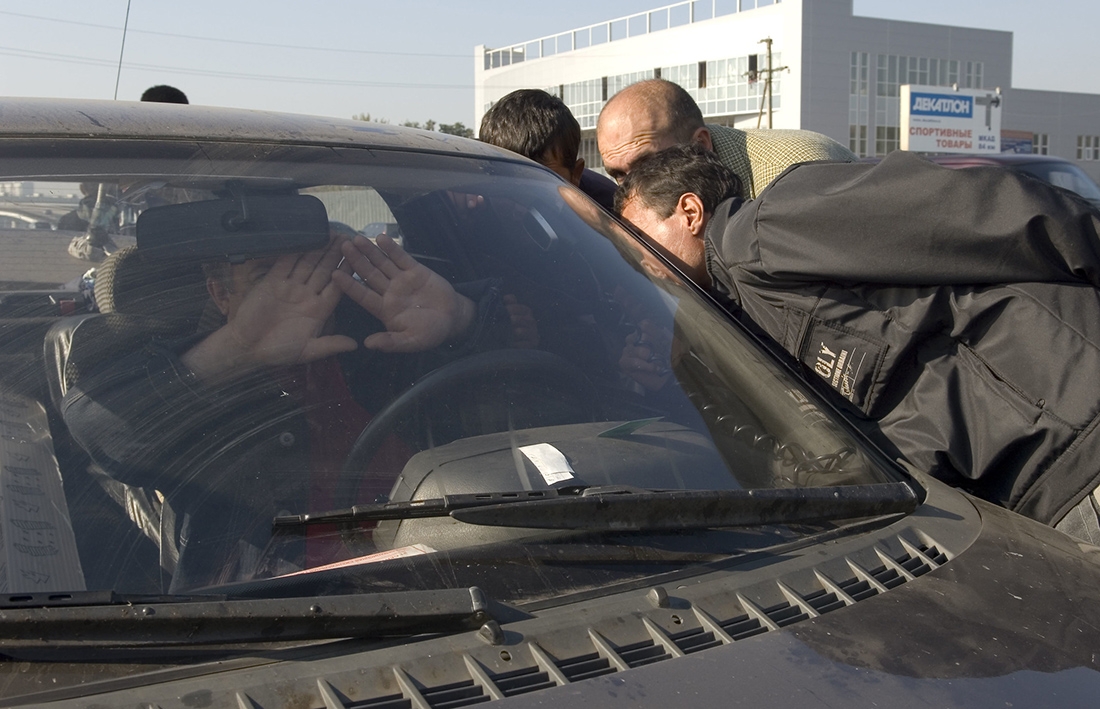 Desperate to bolster the size of its army in Ukraine, Russia is resorting to trickery, bribery, and intimidation to enlist foreign laborers, particularly ones from Central Asia.

And this just as fleeing for home has been complicated by the steep rise in the cost of airfares to countries like Kyrgyzstan, Tajikistan and Uzbekistan.

Much of this recruitment is focused on the Sakharovo migration center in Moscow, where foreign nationals must wait in long lines to obtain or renew work permits. Waiting laborers are handed leaflets with an offer: Sign up with the Russian armed forces, go fight in Ukraine and earn a simplified path to citizenship, as well as a monthly salary of almost $3,300.

Were it not for the danger, the offer would be tempting. Russian pensions are vastly superior to those that most Central Asians can expect back home, and having citizenship means never having to bother with costly and bureaucratic business of work permits.

But rights activists insist this is a con.

“The rules for receiving citizenship have not changed – you need to have an advanced education, no criminal record, your taxes paid up and so on. There is no provision in Russian legislation for getting citizenship in return for taking part in military activities,” Karimjon Yorov, a Vienna-based activist with the Tong Jahoni migrant rights group, told Eurasianet in a written interview.

Yorov said he has pored through the paperwork that is given to labor migrants and has found nothing confirming the claim that citizenship is granted automatically. All the documents state is that the five-year waiting period is reduced by one year, he said. And Yorov is skeptical that even that is true.

As it happens, though, many are being tricked into putting their signatures to military contract service papers anyway.

Valentina Chupik, the head of Tong Jahoni, said that migrants are given bundles of up to 40 pieces of paper when filling out work permit forms and urged to sign everything quickly without properly studying the contents.

“People then sign everything. Among the documents there is enclosed a two-page contract for voluntary military service, written in very small print,” Chupik said. “And people won’t even know about it, because they don’t even get a copy of it to keep.”

There are other ruses. Sunnat, a 26-year-old manual laborer from Tajikistan, was working on a construction site in the Siberian city of Novosibirsk when he was approached with an offer to take up a job in Ukraine’s Kherson province, which is now occupied by Russian forces.

“They told us that a whole load of construction is going on in Kherson, that we should go. And that we could expect salaries of 220,000 rubles ($3,750),” said Sunnat, who spoke to Eurasianet on condition his identity remain confidential. “Some from our group went, but then it turned out that they were taken to fight.”

Feeling the pressure from his employers and after watching multiple video clips of migrants being arrested for supposedly not having the right papers, Sunnat decided to try and return home to wait out the winter in Tajikistan.

“Of course, you can risk staying, and then just surrendering if they send you to the front. But you might not be so lucky. We could be killed the moment we join our unit,” he said.

But even returning home is an increasingly difficult option. The moment that President Vladimir Putin announced what he termed a “partial mobilization” of reservists on September 22, tens of thousands of Russians started fleeing to wherever they could. The list of countries that Russians can travel to at a moment’s notice has shrunken dramatically since the war in Ukraine began. Kazakhstan has seen the greatest influx – around 100,000 so far. Smaller numbers quickly bought flights to Kyrgyzstan, Tajikistan and Uzbekistan. The demand has pushed up prices for whatever last-minute tickets can be found into the thousands of dollars. Many more have tried to drive across the Georgian border.

Another Tajik migrant laborer, 27-year-old Bakhriddin, said he and his friends have been approached repeatedly in Moscow by recruitment officers dressed in plain clothes.

“They offer wages four times higher than we get, they offer Russian citizenship and many benefits,” he told Eurasianet. “So far, nobody has gone for this proposal. Our employer warned us to try to walk in the street as little as possible. Of course, it’s scary that they can send us to war like this, but there is no work in Dushanbe, so we have to put up with this.”

Chupik said she has heard of far more brutal methods too.

“I was contacted by a citizen of Kyrgyzstan, a courier. He was walking down the street, and [the police] stopped him, it was racial profiling as usual. They demanded to see his documents, then they told him to get on the bus. On the bus, they beat him, used a stun gun on him and demanded he sign something. Only afterward did he realize that what he had signed was a contract for voluntary military service,” Chupik said.

Navruz Odinayev, head of a legal aid fund called Himoya, says that in the event of foreign nationals dying in combat, there is no guarantee families will even receive compensation.

And what is more, if governments back in the combatant’s home country discover they have been engaged in military combat, they could face prosecution. In Tajikistan, for example, citizens found to have participated in hostilities on the territory of other states can face prison terms of up to 20 years, Odinayev said.