Beijing keeps its cool when admonishing wayward satrapies. It has perfected the cold shoulder. 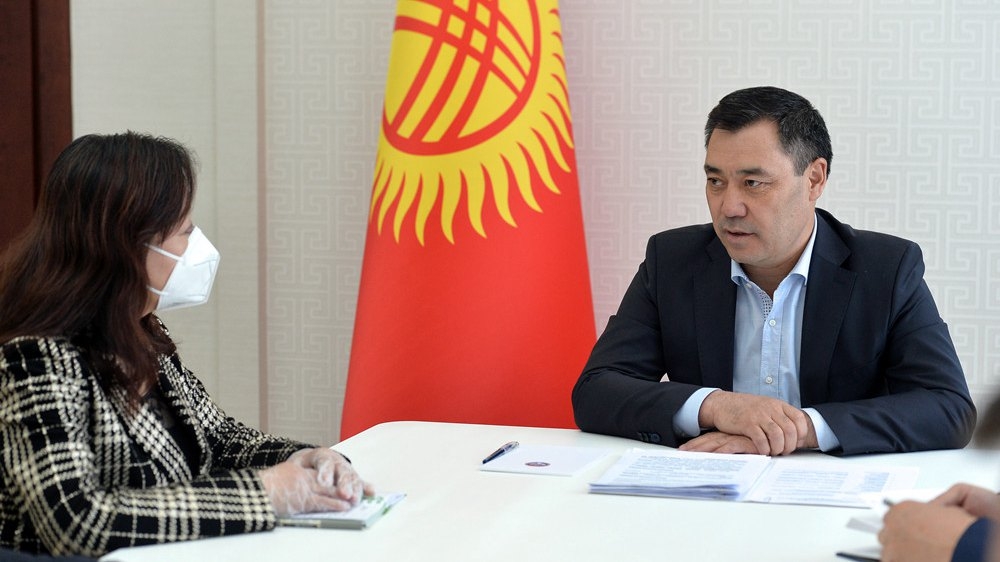 In Beijing, it is considered polite to message your friends when they win reelection. No stranger to protocol, President Xi Jinping fired off a quick telegram to congratulate his Tajik counterpart Emomali Rahmon on a fifth election victory on October 12.

But Xi is keeping Kyrgyzstan’s acting leader Sadyr Japarov, who muscled into power in mid-October, at arm’s length. Japarov has received no telegram.

China is not happy.

During the unrest that followed legislative elections in Kyrgyzstan on October 4 – stoked by Japarov who was sprung from jail amid the chaos and proceed to seize all levers of power – Chinese businesses were targeted for shakedowns nationwide, at times accompanied by violence, a security contractor said: Women were threatened with rape, men were savagely beaten and the Chinese flag set alight. On October 6, 35 Chinese executives fled to a hotel in Bishkek, only to be surrounded by an armed mob seeking ransom. Elsewhere, over 100 Chinese workers spent that night in a snowy forest after fleeing a mob that had occupied their mine. The next day, men wielding Kalashnikovs visited the Chinese oil refinery in Kara-Balta demanding a $350,000 protection fee, threatening to set the plant on fire. When hundreds of protesters surrounded the plant, the men with AKs were paid, the source said.

Through it all, the Chinese Embassy said nothing. Then, on October 16, Ambassador Du Dewen was finally called in to meet the acting Kyrgyz foreign minister. In some of the more direct comments one can find on the Chinese Embassy’s mannerly website, Du asked for help protecting the rights of Chinese investors. “China is highly concerned about the current situation in Kyrgyzstan,” the readout said. “Ambassador Du focused on protecting the safety and legitimate rights and interests of Chinese citizens and enterprises in Kyrgyzstan, and maintaining communication [with Kyrgyz counterparts] regarding these issues.”

Three days later, Cheng Guoping, external security commissioner at the Chinese Foreign Ministry, summoned Kyrgyz Ambassador Kanayym Baktygulova. This is a significant gesture. When Beijing is concerned about the safety of its citizens abroad, the Ministry of Public Security makes the calls. Cheng gets involved only when China feels its domestic interests are threatened. Cheng’s meeting signalled that Beijing sees the unrest as more than a Kyrgyz issue.

For business ties, the damage had already been done. The chaos confirmed the worry that Chinese in Bishkek have long expressed: that Kyrgyz officials “don't care” enough to protect them. Some are saying the violence was the last straw.

That would be catastrophic for Japarov, whose government on October 28 telegraphed its desperation by asking China’s official Association for the Development of Enterprises Abroad to organize a trip so Chinese investors can see for themselves how the political situation in Kyrgyzstan has “normalized,” Kyrgyz state media reported.

Needless to say, this is not a good environment in which to negotiate debt forbearance. Bishkek has asked Beijing twice this year and is still waiting for a response. China holds around $1.8 billion or over 40 percent of Kyrgyzstan’s external debt.

Finally, on October 30, Ambassador Du met Japarov and offered her congratulations. “The ambassador said that China hopes Kyrgyzstan can maintain stability and realize its social and economic development,” reads the clinical bromide of Chinese government media. The English-language CGTN report added that the acting prime minister “said that the country would spare no effort in protecting the legitimate rights and interests of Chinese citizens and enterprises in Kyrgyzstan.” Japarov’s website did not mention the meeting.

It’s not only the political unrest that has dented relations. For almost five months, Kyrgyz importers have not been receiving many goods from China, reported 24.kg.

Though both governments claim the border is open, it is effectively closed. China suspended arrivals from Central Asia in March, as COVID-19 spread in the region; Kyrgyz drivers thus cannot cross into the People’s Republic. Chinese nationals, on the other hand, must submit to a 14-day isolation period after returning from abroad. Thus Chinese drivers are unwilling to cross the border to Kyrgyzstan; they would be waylaid for too long.

China’s customs service says exports to Kyrgyzstan were down 44.7 percent in the first three quarters of 2020.

Members of the Kyrgyz Association of Markets, a trade lobby, are now threatening to stop paying their taxes in November if the border remains closed. Some tried to storm the government headquarters in Bishkek on November 2.

COVID is also frustrating business ties with neighboring Tajikistan. On October 6, the Civil Aviation Agency there announced that flights between Dushanbe and Urumqi, in Xinjiang, would resume by mid-month, reported Centralasia.news. But as of November 3 no flights from Dushanbe have landed in Urumqi. Asia-Plus reported on October 19 that Tajik authorities had not obtained permission from the Chinese aviation authorities to land in Urumqi.

Chinese know-how is also attracting attention at the grassroots level, at least according to Beijing’s propagandists. On October 15, Xinhua featured the story of one Uzbek cotton farmer’s new love affair with Chinese drip irrigation technology.

Abdullah Bekmatov was skeptical earlier this year when he installed the watering equipment on fewer than half his acres. By harvest time, he was a fanatic: “No longer able to hide his inner joy,” according to Xinhua. “Compared to traditional cotton planting methods, using China’s drip irrigation technology reduces the total cost [of inputs] by 40 to 50 percent,” Bekmatov allegedly exclaimed. “Next year, all my cotton fields will use Chinese drip-irrigation technology.”

Tashkent’s openness to Chinese products will likely intensify with a new freight connection. On October 13, the first regular train service launched between Hebei Province (adjacent to Beijing) and Tashkent, carrying goods worth $4.5 million, reported China News Service. At least 12 trains weekly will now depart from Hebei for Central Asia, including to the border with the region at Khorgos. (The report did not say how many would travel on to Tashkent.)

These trains are not just for facilitating Chinese exports. For most of Central Asia, China offers the closest port. Docks on China’s east coast have been accommodating an influx of cargo from Central Asia in recent years. On October 6, 21 containers of Uzbek potash fertilizer departed Guangzhou for Indonesia.

A bad cherry harvest following spring frosts in Uzbekistan saw Chinese imports fall 83 percent in the first seven months of 2020, part of an overall 44 percent year-on-year drop in Uzbek fruit and vegetable sales to China, the East Fruit industry digest reported. But Uzbek confectioners substituted for the lack of fresh fruit, increasing candy exports to China by over five times year-on-year in the first nine months of 2020, reported UzDaily.

Officials in Tashkent seem unruffled by one poor harvest. On October 24, the Ministry of Investment and Foreign Trade said exports to China would be worth $3 billion by 2025 and projected Chinese investments in Uzbekistan to reach $5 billion that year, reported Kun.uz. Uzbekistan’s China-bound exports have increased in the last five years, according to Chinese customs data, from $1.2 billion in 2015 to $2.1 billion in 2019.

Uzbekistan’s Association of Exporters last month became an official partner of China’s Alibaba e-commerce platform, UzDaily reported on October 8. The designation makes it much easier for Uzbek sellers to list their wares on Alibaba – by some measures the world’s largest online marketplace – and reach Chinese buyers. The Association’s chairman said that, as a result, he expects Uzbek exports to China to increase by two or three times. The Uzbek Embassy in Beijing also hosted a webinar for Uzbek exporters eyeing opportunities in China. Over 200 reportedly logged in.

Uzbekistan is not alone in seeing China as the marketplace of the future. On October 27, Kazakh Minister of Trade and Integration Bakhyt Sultanov told journalists that his office has selected 35 Kazakh grain and agriculture businesses to receive training on how to meet Chinese customs regulations, building on recent successes shipping food products eastbound. In a nod to the burgeoning competition with Uzbekistan for Chinese custom, he added that the ministry will help 50 more Kazakh companies register on Alibaba by the end of the year.

The only potential hiccup with such increasingly cozy ties is unhappy Central Asians.

Sultanov noted that “some people on social networks expressed dissatisfaction with the ministry’s plan to expand meat exports to China, believing that this may lead to a rise in domestic meat prices in Kazakhstan,” the Chinese Embassy reported in its summary of the briefing. Sultanov assured journalists that only processed meat products would be export to China and that domestic prices would not be affected.

Sultanov’s comments give texture to rising concerns about Chinese business intentions across Central Asia. Polling data supplied to Eurasianet in October showed highly negative opinions of Chinese businesses in Kazakhstan and Kyrgyzstan. In Uzbekistan, respondents were more confident that Chinese investments will benefit the country, though the percentage of Uzbeks calling themselves “very concerned” about an increase in national debt jumped 18 points in the last year; those “very concerned” about Chinese nationals buying land shot up from 30 to 53 percent; and confidence that the Chinese will create jobs dropped significantly.