The Chinese leader downplayed repression in the region, while hyping economic possibilities. 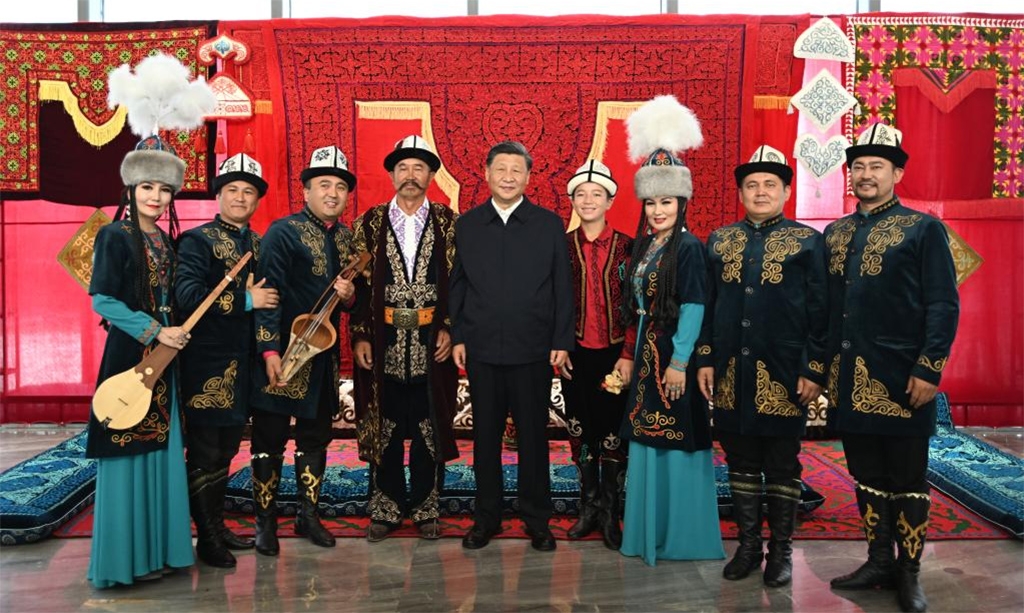 Chinese leader Xi Jinping is trying hard to reshape the narrative about Xinjiang Province, recasting it as a trade hub, not a den of popular discontent. But the legacy of China’s crackdown on Muslim minority groups continues to cast a shadow over the region.

Xi, who is angling to secure a precedent-busting third presidential term, visited Xinjiang from July 12-15. It was the first time he had gone west since 2014, shortly after he unveiled his Belt and Road Initiative (BRI) to transform China into a global commercial force. Back then, Xinjiang was a hotbed of unrest, with indigenous Muslim communities, led by the Uyghur minority, resisting Beijing’s economic development and cultural assimilation efforts. Uyghur resistance occasionally turned violent; Chinese authorities branded such episodes as terrorism.

Since 2014, Xi’s government has carried out a vast crackdown on all forms of dissent in Xinjiang. Up to 1 million Uyghurs and other Muslim minority group members, including ethnic Kazakhs and Kyrgyz, have been locked up in detention facilities, which Beijing officially describes as vocational training centers. A recent document leak highlighted the extent of China’s repressive practices in the region.

In Xinjiang, Xi downplayed international concerns about Uyghurs and Muslims. State radio reported him as saying that China’s policies on national minorities were “good and effective.” But he also made remarks that religious freedom advocates are certain to find disconcerting. Saying the government wants to “protect the normal religious needs of the people,” Xi indicated that officials will expand efforts to make faith subservient to Chinese Communist Party ideology.

"We should keep working on the sinicization of Islam and find ways to adapt religion to a socialist society,” the official Xinhua news agency quoted Xi as saying. “We should train a group of leaders who're familiar with the Marxist view of religion, and how to work with people having religious belief."

Raffaello Pantucci, a senior associate fellow at the Royal United Services Institute, said Xi’s comments were consistent with his overall leadership style. “At the end of the day, the key takeaway of Xi Jinping's [tenure] is that party is paramount,” Pantucci said.

While Xi in Xinjiang clearly signaled the government’s intolerance of dissent, he attended a performance of the Kyrgyz epic poem Manas in a show of cultural sensitivity toward the region’s ethnic minorities. The event, Pantucci said, demonstrated that Beijing understands that China and Central Asia are intertwined.

“[Kazakhstani leaders] have lobbied the [Chinese] government behind closed doors to do something about their people [and] there seems to be some evidence that the Chinese have responded to that,” Pantucci said. “It signals that the Chinese government recognizes the multiethnic” nature of Xinjiang.

China scholar James Leibold of La Trobe University in Melbourne saw Xi’s interest in the Manas performance as part of an effort to recreate “Xinjiang as multiethnic rather than a Uyghur” region.

The primary purpose of Xi’s Xinjiang tour was touting the region’s economic potential, as well as BRI’s success in spurring growth. The Chinese economy withered during the second quarter of 2022, in large part because the government’s hardline approach on containing COVID hindered factory and export operations. Xi portrayed Xinjiang as an economic bright spot, touring various export venues in the region, including the Urumqi inland port facility.

"Xinjiang is no longer a remote area, but a major hub for opening up to the world," Xi said at one point during his tour.

Xi did not visit the free trade zone at Khorgos, straddling the Chinese-Kazakhstani border, but he viewed a livestream of activity there. Speculation has long swirled around the profitability of Khorgos. International sanctions imposed on Russia because of its unprovoked attack on Ukraine have led to a decline in rail traffic at the free trade zone.

On June 25, Khorgos launched a new air-delivery system designed primarily to facilitate e-commerce. The new route involves the air transport of goods from manufacturing hubs in China to Khorgos. The goods are then shipped by train to the Kazakhstani commercial hub, Almaty, where they are loaded back onto planes for shipment to Europe. Given the logistical complexity, trade volume along the Khorgos air route is likely to remain low for the foreseeable future.

Xi’s Xinjiang visit was tailored for a domestic audience, an opportunity for him to frame his leadership as a guarantor of economic and social stability. From this perspective, the trip was a success, Pantucci said.

"He can now confidently say, ‘I have brought Xinjiang stability’,” Pantucci said. “It is worth remembering the last time he visited Xinjiang was eight years ago, and there was a suicide attack at Urumqi train station after he left.”

“This time Xi spent time visiting with civilian cadres showing the thriving prosperity and stability,” Pantucci added. “The fact that it came just after his visit to Hong Kong was also quite significant. It's a signal to China and, to a lesser degree, to the world."

While his trip was successful in a domestic context, Xi faces continuing challenges in the international arena over his government’s repression in Xinjiang. On July 19, the Reuters news agency reported that China is attempting to quash a UN report on human rights conditions there. Michelle Bachelet, the outgoing UN High Commissioner on Human Rights, has vowed to release the report before the end of her term. China is agitating behind the scenes to prevent the report’s release, according to Reuters.

The success of Xi’s Xinjiang visit is bound to harden China’s stance on foreign criticism over government practices in the region, Pantucci suggested. “We're in a period of considerable tension and hostility between the West and China for the medium-to-long term," he said.