The Luban Workshops will spread technical skills, familiarity with Chinese equipment, and suspicion. 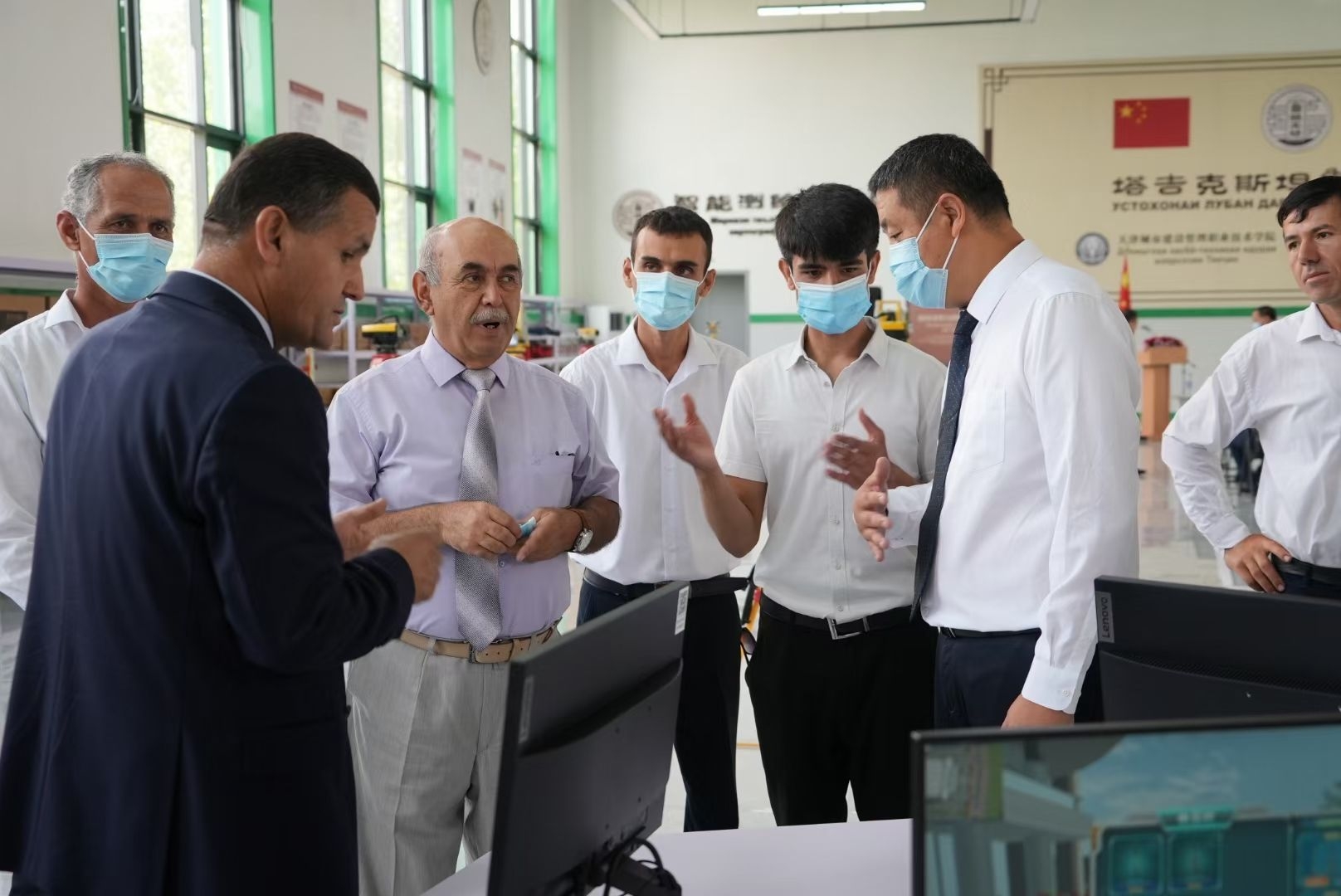 Getting to know you. (Shandong Dolang Technology Equipment Company)

Inside the gym at the Tajik Technical University, Chinese workers spent the summer installing the latest in plumbing and HVAC equipment.

The workers from Shandong Dolang Technology were not there to pamper the athletes, though. A slick video shows them converting the space into China’s first Luban Workshop in Central Asia, where future generations of Tajik students will encounter the latest in ventilation and green energy technology.

China’s Confucius Institutes are well-known. The soft-power outposts attached to hundreds of universities around the world have been accused of undermining academic freedom and likened to a Trojan Horse.

Luban Workshops are a more recent development. Named for an ancient carpenter today revered as the patron saint of builders, they are intended to be the vocational training equivalent of a Confucius Institute, designed to help staff the projects dotting the globe as part of China’s multi-billion-dollar infrastructure extravaganza, the Belt and Road Initiative (BRI).

Since 2016, 20 Luban Workshops have opened in 19 countries, mostly in the Global South but also in several European countries.

For Central Asian hosts, the project is a welcome job-creation opportunity. But local leaders must navigate domestic skepticism about China’s intentions, which is boosted by mounting debt and abuses across the border in Xinjiang.

Likewise, some Western think tankers have struck a skeptical note about the Luban Workshops: Are they a vehicle to create dependence on Chinese technology exports? What does yet more economic entanglement mean for Central Asian sovereignty?

While workers installed the equipment in Dushanbe, a lecturer 5,000 miles away was expanding his own university’s Luban Workshop, which opened in 2019, to offer a master’s degree in the Internet of Things.

Sulaiman Patel of the Durban University of Technology (DUT), in South Africa, raves about the workshop he and five colleagues attended at the Tianjin Vocational Institute last year.

Though it was virtual (they were unable to travel due to COVID-related restrictions), it was a hands-on experience – something Patel described as unusual in Africa.

“There’s no substitute for having the physical hardware and devices in front of you, doing things. So, the fact that we were in a lab, and that we were getting guidance on how to operate these pieces of technology and doing it ourselves was a phenomenal experience,” said Patel.

What makes Luban unique is that China provides the equipment, whereas Western countries focus on grants, said Oludayo Olugbara, the executive dean of accounting and informatics at the DUT. His university has already graduated 300 students from a short-skills training course through the Luban Workshop; next year it will begin enrolling students in a three-year degree.

Before Luban set up at DUT, “we didn’t have 3D printing facilities,” Olugbara said, describing how African universities are often underfunded.

The first Luban Workshop opened six years ago, in Thailand. The collaboration between Tianjin Bohai Vocational Technical College and Ayutthaya Technical College specialized in automation and robotics before branching into high-speed railway technology, which serves the BRI flagship project in the country, a $7 billion high-speed rail link. The workshop has trained 1,125 people, according to Chinese state media.

The Luban Workshops might be seen as the second stage of the BRI, which has, by one count, channeled $9 billion into Central Asia since 2013 – spent on everything from roads and ports to mining and energy.

China became a net capital exporter for the first time in the mid-2010s. Around the same time,  Chinese firms abroad realized they did not have enough local skilled workers to operate their projects, a policy paper by two scholars at the Nanjing University of Information Science and Technology later found.

Beijing stepped in and encouraged technical schools to seek foreign partnerships. The prosperous region of Tianjin, on the coast near the capital, has been most active.

“Wherever Chinese companies go, our vocational training workshops will be built there, and we’ll train skilled talents there,” the Nanjing scholars wrote in 2021.

Li Lifan, an associate research professor at the Shanghai Academy of Social Sciences, confirmed this practical function in an interview with Eurasianet.

"We need to localize labor since it is more expensive if we only rely on Chinese workers,” he said.

Li says the expectation is that Luban graduates will take work with Chinese firms.

“We encourage the students to work for Chinese companies, like Chinese banks or Huawei. I think it's to develop their vocational training, vocational skills and career,” he said.

Luban host countries include Egypt, Ethiopia, India, Pakistan, and Portugal, among others, according to a report from Tianjin’s first conference on vocational education, held in mid-August. Tajikistan and Uzbekistan will soon join that list.

The facility at the Tajik Technical University, which is expected to accept its first students in the coming months, is a partnership with the Tianjin Urban Construction Management and Vocation Technology College, which donated equipment and resources worth $1.2 million, according to Tianjin Daily.

The Tajik Luban Workshop will specialize in land surveying and gas transportation, said an academic familiar with the program on condition of anonymity because he did not have permission from Tajikistan’s Education Ministry to speak to the press.

In Uzbekistan, a workshop at Tashkent State Transport University will specialize in logistics and information technology, according to Chinese state media. It is unclear when it will open.

These fields align closely with Chinese capital flows into the region, which is rich in resources including natural gas. In 2021, for example, Chinese firms invested more than $211 million in Tajikistan, mainly in mining. Though they have brought jobs, the companies have faced criticism for not employing enough local people, especially in senior positions.

Before a Luban Workshop can open, academics from both the host university and the Chinese sponsor exchange visits and decide which skills are needed based on the BRI projects in the country. The Chinese school then provides equipment, teachers, and translators.

Typically, colleges in participating countries initially sign a three-year contract with their counterparts in Tianjin. The DUT signed its three-year proposal in 2019 and recently entered a five-year project extension.

In meetings with Central Asian officials, Communist Party officials have increasingly touted the Luban concept. President Xi Jinping has twice in the last year publicly told the region’s presidents about the opportunities. Foreign Minister Wang Yi, while hosting his Central Asian counterparts in May 2021, said China would build five Luban Workshops in their region to offer high-tech training.

Chinese thought leaders are not shy in discussing the soft power benefits.

These people-to-people interactions will help foreigners understand Chinese values, the policy paper from Nanjing University argued. This, it concludes with a quote from President Xi, will “help construct a closer ‘community of shared future for all humankind.’”

Besides, the workshops are more practical than trying to set up a university, said Li. Opening a college or university “requires many levels of approval. Compared with that, a Luban Workshop is easier to build.”

It’s too early to say how the Luban Workshops will be received in Central Asia. But the experience in South Africa could be instructive.

For Olugbara at DUT the Luban Workshop has been a boon. However, he also realizes “there’s no free lunch” and that his students must prepare for a day when Chinese largess dries up.

He does not pressure graduates to work for Chinese companies, only to keep their minds open – some work for Amazon and Microsoft – to gain the skills they need to develop domestic industries. “Our focus is not only to strengthen [students’] employability. We also focus on students being able to create their jobs and contribute to societal development."

Could this be an example for Central Asia?

Anticipating that Western policymakers will see the project as another way Beijing is changing the global center of gravity, Dirk van der Kley, a research fellow at the Australian National University, stressed that many of the hosts, like Tajikistan, “will not care about these criticisms. They need skilled workers for their economy. Rich liberal democracies are frankly not providing as much support."

That’s obvious in South Africa, which Olugbara knows could be asked to pick sides in a future great-power confrontation.

“If there's a [clash] between China and America, you think I'm going to support America?” he said, mentioning the ongoing Russia-Ukraine war. “Never. I will look at the person [standing in front of me] before I think of somebody very far away from me.”