China fires back over mining ruckus in Kyrgyzstan

Dozens of Chinese nationals were injured in fighting. 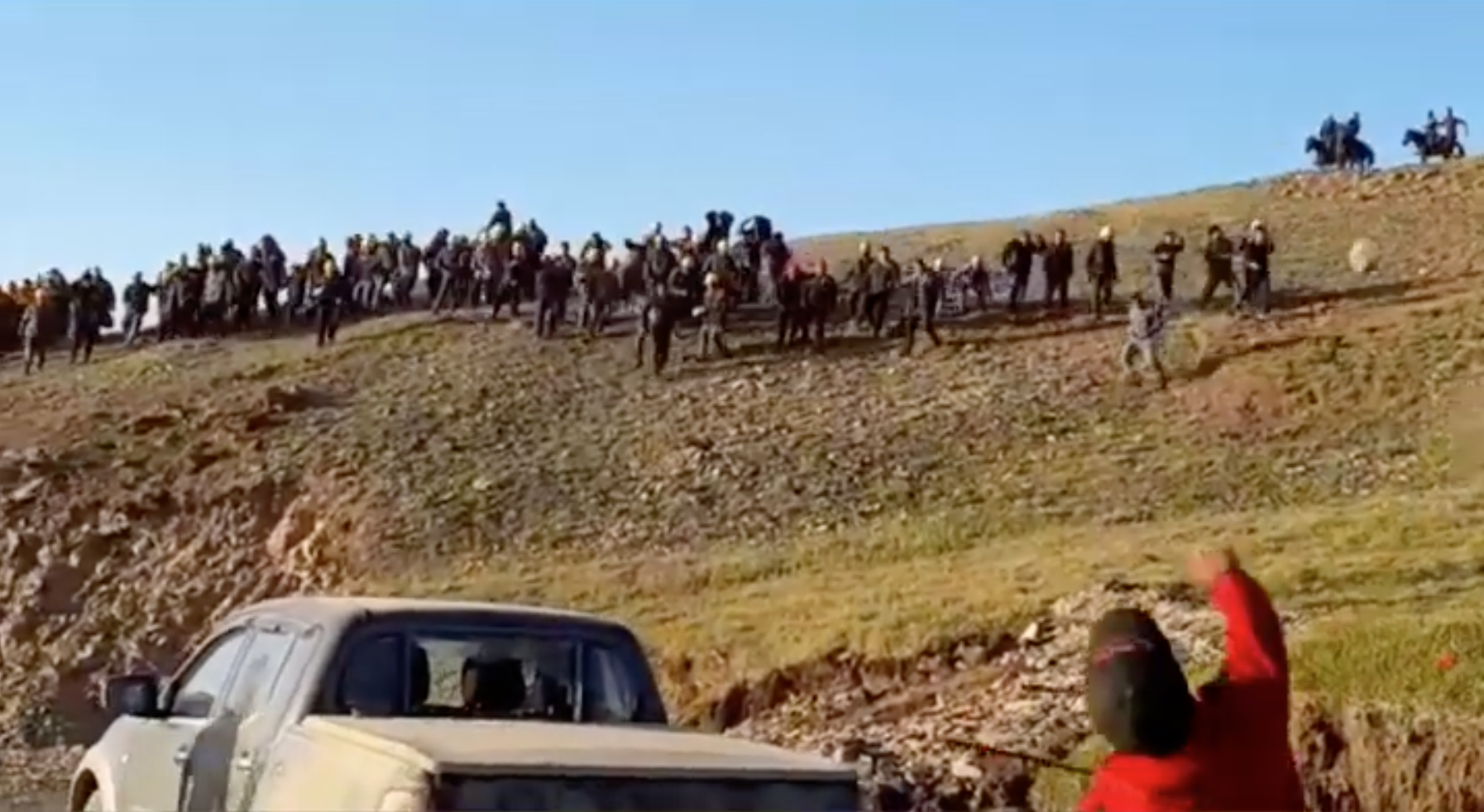 Big trouble in little Chinese mine: Fighting and stone-throwing at Solton-Sary field landed dozens of people in the hospital. (Photo: YouTube screengrab)

A clash at a gold mine that left more than two dozen Chinese workers needing medical treatment has earned Kyrgyzstan a rare slap on the wrist from economic overlord Beijing.

The Chinese Embassy in Bishkek issued a statement on August 6 characterizing a confrontation at the Solton-Sary field in Naryn province the night before as an attack by Kyrgyz villagers on the state-owned Zhong Ji company operating a mine there.

Villagers “illegally invaded the territory of the Chinese company and assaulted employees, as a result of which dozens of Chinese citizens were injured,” the embassy statement said.

The statement said the embassy had demanded Kyrgyzstan fully investigate the incident and “strictly punish” perpetrators.

The Chinese account of the fracas is a far cry from the one provided by the Interior Ministry, which has framed the conflict as a two-sided affair.

Around 300 residents had arrived at the mine August 5 demanding that the Chinese company cease work and leave the region, the ministry said. After that, the villagers and the Zhong Ji employees began throwing stones at one another.

Doubts about this characterization of events were prompted by a Health Ministry bulletin that accounted for 19 Chinese but only one Kyrgyz being admitted to the hospital in Naryn.

Footage of the incident, which the State Committee for National Security, or GKNB, has implored citizens not to circulate for concern that the images might stir tensions, offers few clues as to what happened.

The preamble of this episode is typical of the missteps that have made a mixed blessing of a potentially lucrative industry.

On August 2, two residents of Ottuk village, close to Solton-Sary, were driving up to high pasture land to visit relatives when their car began to experience mechanical trouble.

According to one of the men, they appealed to a nearby group of Chinese workers – employees of a company subcontracted by Zhong Ji – for help. But the work gang misunderstood the appeal and began attacking the pair with spades and electric shockers, the man has claimed.

The two Ottuk residents needed hospital treatment. According to RFE/RL’s Kyrgyz service, a dozen Chinese have been questioned by police over the incident.

Zhong Ji has also been on the backfoot over allegations that blasting activities at the mine have caused livestock to die.

An investigation by the state sanitary inspectorate last month all but cleared the company of causing the death of a herd of sheep but Zhong Ji decided to pay compensation anyway.

That decision came after the head of the state mining regulator told the company doing so might help boost its image.

Chinese mining companies have been involved in a number of clashes with local communities in Kyrgyzstan in recent times. Few have drawn a diplomatic response.

A notable exception was another attack at Solton-Sary in 2011, when Zhong Ji was carrying out exploratory work.

Beijing’s ambassador at the time, Wang Kaiwen, criticized the lack of protections for investors after three Chinese nationals were assaulted by villagers.

The attack was reportedly prompted by the villagers’ desire to safeguard their own long-standing but illegal artisanal mining interests at the deposit. This type of mining continues in the region today.

The Solton-Sary deposit is divided into three sections. The Buchuk section, for which Zhong Ji has the license, is the most lucrative and contains eleven tons of proven gold reserves.

The company acquired Buchuk by way of payment for a 42-kilometer stretch of road valued at $42 million that another Chinese state-owned outfit had built in Kyrgyzstan.

Deals of this type have generated charges that poor countries are getting short-changed as China seeks to reshape trade and investment in Asia and beyond.

But in Kyrgyzstan, where the local environment renders digging for gold a highly fraught process, Beijing might be the one feeling it got a raw deal.