Kazakhstan is moving through the production cycle, powered by Chinese demand. 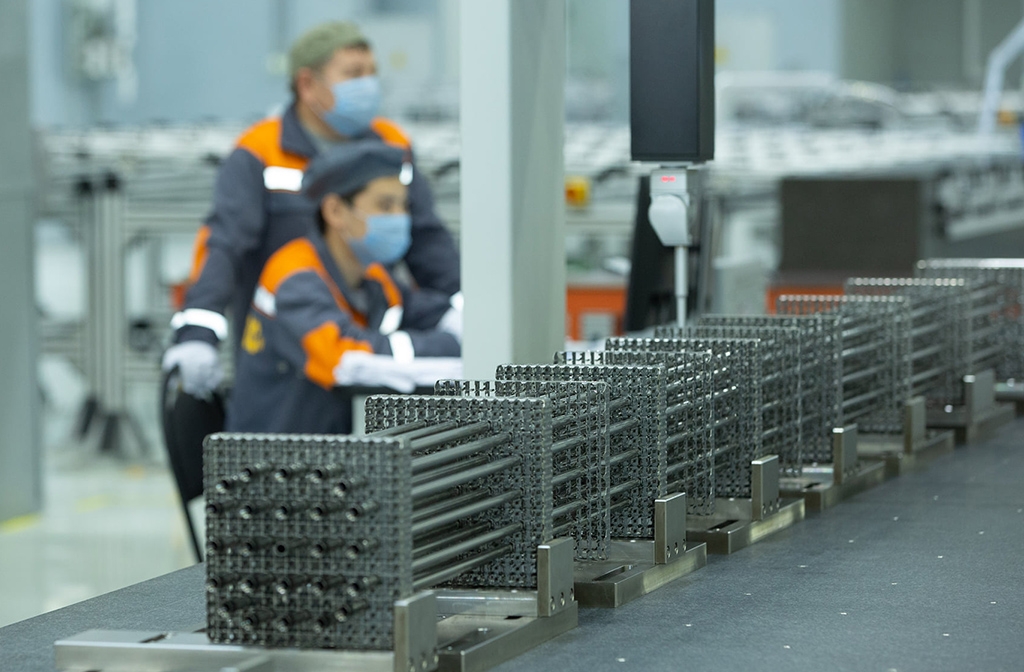 Workers at the plant in Oskemen (Kazatomprom)

A fuel assemblies plant heralding a new phase of nuclear cooperation between Nur-Sultan and Beijing has received its first shipment of low-enriched uranium from Russia, the supplier said.

The fuel division of Russian energy giant Rosatom made the delivery to the Kazakh-Chinese factory in the northeastern town of Oskemen, it said November 16.

Its formal opening, long delayed by the coronavirus, was on November 10.

Ulba-TVS LLP will do this by producing fuel assemblies that consist of ready-to-use rods loaded with processed uranium fuel pellets. The assemblies will then be shipped to China where they will be employed in nuclear reactors

Construction began in 2016 on the factory, which is located on the territory of the Ulba Metallurgical Plant (UMP) and has benefited from technology from China, France, Germany and the United States.

The last of those is notable, since Washington last year ordered a suspension of exports of any radioactive materials intended for use in CGNPC facilities over fears that China is boosting its nuclear weapons capability.

Kazakhstan, which via Kazatomprom is the world’s largest uranium producer, has positioned itself as a player in nuclear diplomacy.

The UMP in Oskemen, a city also known as Ust-Kamenogorsk, hosts the Low Enriched Uranium (LEU) Bank, a $150 million initiative backed by the International Atomic Energy Agency, which aims to be a store of low-enriched uranium for countries pursuing civilian nuclear power programs.

“As a state possessing large volumes of uranium-containing raw materials, we contribute to the peaceful use of atomic energy,” said then-President Nursultan Nazarbayev at the LEU’s opening ceremony in 2017.

Not much has been heard about the facility in the years since.

China and Kazakhstan’s cooperation in the field dates back to at least 2006.

That was the year that CGNPC entered the market and formed with Kazatomprom a joint company Sezimbai­-U that develops two Kazakh uranium mines.

This summer, CGNPC acquired for $435 million a 49-percent stake in a Kazatomprom subsidiary that has two different mines in the southern Turkestan region.

The Oskemen venture is expected to produce about 200 tons of fuel assemblies annually.

Russia, Kazakhstan’s oldest partner in uranium projects, appears to have cemented its role as the plant’s supplier.

Up until January of last year, Kazakhstan had a minority stake in the Ural Electrochemical Integrated Plant across the border in Novouralsk thanks to its 50-percent stake in a venture with TVEL.

That month Kazatomprom sold the stake to the Russian side, retaining a single share and guaranteed access to the output of the plant – the oldest of its kind in Russia.

TVEL said in its statement that deliveries for Ulba-TVS LLP would be regular as part of a commercial contract.

The last time Kazakhstan had its own nuclear power plant was more than two decades ago. Since that facility in the Western town of Aktau was closed, proposals to build a new one have been met with rancor. That is partly due to the history of the Soviet nuclear weapons program, which left a legacy of contamination and illness.