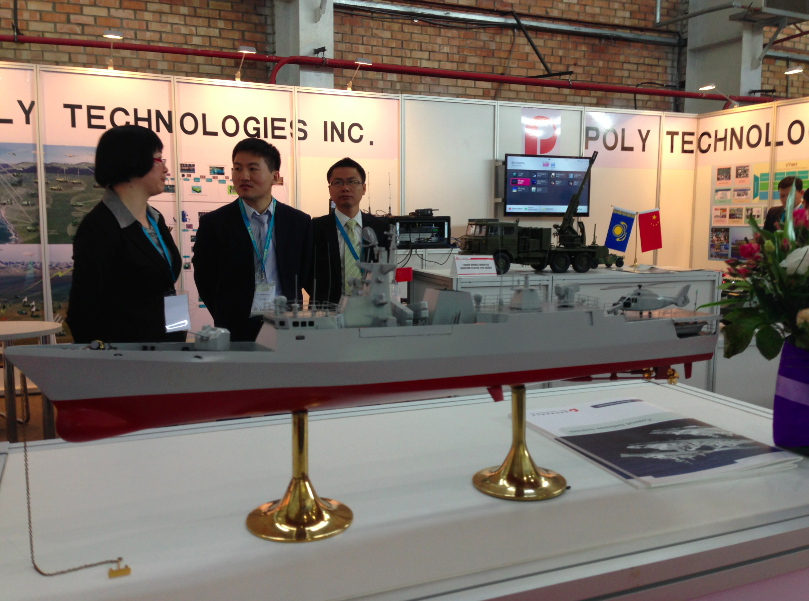 A model of the Chinese Type 056 corvette on offer at the KADEX defense expo in Astana, Kazakhstan. (photo: The Bug Pit)

Four years ago, Kazakhstan naval officials said they were poised to buy three corvettes and were in negotiations with South Korean company STX to build them. That plan apparently fell through, and the competition opened again, with candidates from Russia, Turkey, China, the Netherlands, Germany now in the running (as well as STX). And Kazakhstan's Ministry of Defense has told the competing companies that they intend to make a decision very soon.

Kazakhstan is far from the only country to see a long delay in a big military procurement project. And Kazakhstan military officials still say the navy is one of their top priorities. The MoD is also conducting a competition among foreign shipbuilders to build a new shipyard near the Caspian port city of Aktau, which would build both civilian and military ships. That, too, is supposed to be finalized this year, MoD officials said. "Shipbuilding is indispensable for the protection of the national interests of the country," said Ermek Kozhamberliyev, a senior navy official, speaking at KADEX. In addition to the new procurements, the navy will be looking at strengthening its naval infantry and in creating a unified command structure for all of the units charged with Caspian security, he said.

As it did in 2012, the big Russian military magazine National Defense put out a special issue for KADEX, and as in 2012, the cover story this year was on Caspian naval developments. It describes Kazakhstan's navy as having "sufficient quantity, but one can't speak of its qualitative improvement." It adds, though, that "this is largely explained by the fact that if some threat on the sea emerges Astana can always count on the help of one of its closest allies: Russia."

The most intriguing naval event at the show was a presentation by the Chinese company, Poly Technologies about its Type 056 corvette. The ship has a helicopter pad in the rear and could be equipped with Chinese C-705 anti-ship missiles.

Although the presentation was public, the commander of Kazakhstan's navy, Captain Zhandarbek Zhanzakov sat in the front row and asked all the questions. (Representatives from the other competitors, naturally, made up much of the rest of the audience.) He asked how many of the ships China had in service (50), the range of the missiles (about 35 km) and how long they last (about ten years, after which they may have to be replaced). At the end, he thanked the company representatives and said "I'll talk more with you and your embassy when all these people aren't here." Stay tuned...