China warns against meddling in Kazakhstan ahead of Putin meeting

It sounded like Xi Jinping was warning Putin against any adventures in Central Asia. 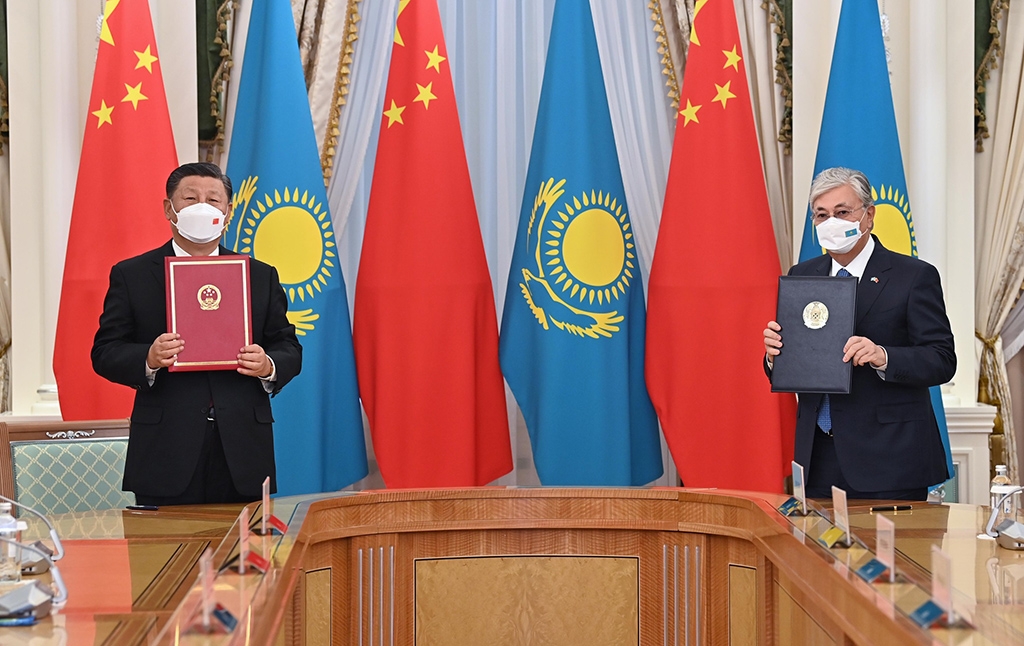 It's good to have friends: Xi pays Tokayev a visit. (Kazakh government friends)

Chinese President Xi Jinping has kicked off a visit to Central Asia with a no-nonsense statement of support for the territorial integrity of his first host country, Kazakhstan.

It sounded like an assertive statement of intent from Beijing, coming just before Xi meets Russian President Vladimir Putin this week in a face to face that the world is watching closely.

Russian-ally Kazakhstan has been shaken by the Kremlin’s invasion of Ukraine, while facing down saber-rattling from Russian nationalists angry at what they deem Kazakh disloyalty over the war.

After meeting President Kassym-Jomart Tokayev in Kazakhstan’s capital, Xi made it clear that Beijing would not tolerate any encroachments on Kazakhstan’s territory.

“I would like to assure you that the government of China pays huge attention to relations with Kazakhstan,” he said, in remarks quoted in Russian in Tokayev’s office’s readout of the meeting.

“However the international situation changes, going forward we will also resolutely support Kazakhstan in the defense of its independence, sovereignty and territorial integrity; firmly support the reforms conducted by you to assure stability and development; [and] categorically come out against interference by any forces in the internal affairs of your country.”

Given that the most obvious potential threats to Kazakhstan’s territorial integrity emanate from its northern neighbor Russia, Xi’s words looked like a warning to Putin not to meddle in Central Asia, where Russia and China are the two major geopolitical players.

“Xi’s visit to Kazakhstan can be seen as a sign that Beijing sees Kazakhstan as a friend – and Russia should not do anything to hurt Beijing’s friend,” Mark Katz, a professor specializing in Russian foreign policy at George Mason University, told the South China Morning Post ahead of Xi’s state visit to Kazakhstan.

This was Xi’s first trip outside China since January 2020, in the early days of what became the coronavirus pandemic.

He is on his way to neighboring Uzbekistan to participate in a summit of the Shanghai Cooperation Organization (SCO), a security bloc whose members include, as well as China and Russia, four Central Asian states, India and Pakistan.

On the summit sidelines Xi will meet Putin, with whom he declared a “no limits” partnership when they last met in Beijing shortly before Russia invaded Ukraine.

China has not condemned Moscow’s aggression, but has blamed the West for stoking tensions. However, it has not provided any sanctions relief to Russia, either.

Putin will arrive at the SCO summit looking weakened, after Ukrainian counterattacks forced Russian forces to retreat in recent days.

Xi’s shot across the bow in Kazakhstan suggests that Beijing is determined to assert its interests in Central Asia, and make clear to Moscow that it sees the region as its own backyard as well as Russia’s.