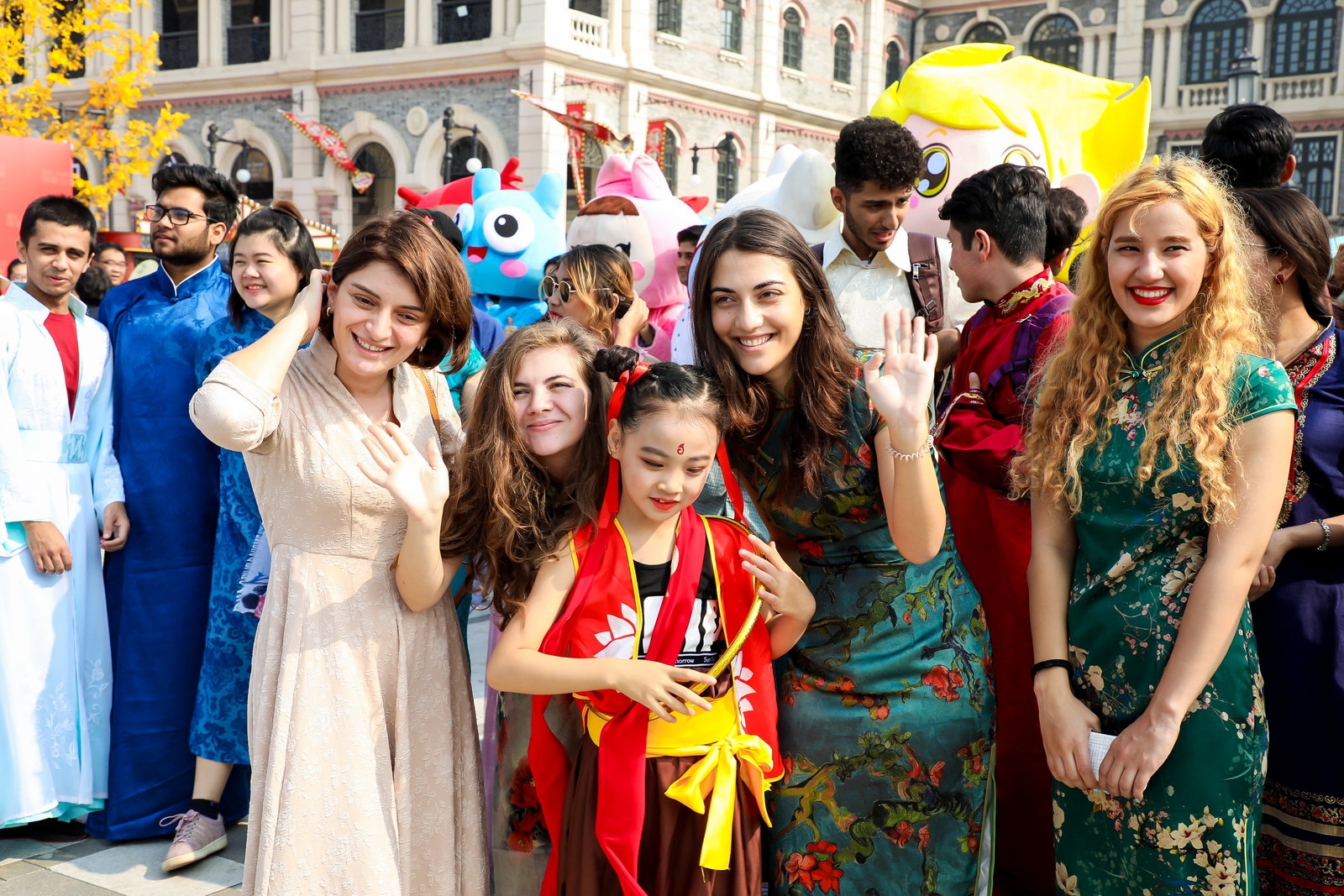 Georgian students in Zhengzhou, China, in 2019 (Confucius Institute at Free University of Tbilisi)

When Nene Akhobadze began studying Chinese at Tbilisi State University in 2014, she was thinking ahead.

“I knew the language would help me find a better job in the future,” she recalled, explaining that few people in Georgia speak Chinese.

After a year, Akhobadze traveled to Hangzhou on an exchange program. Now she’s studying for her master’s degree in Chinese history at Hangzhou’s Zhejiang University.

“I want to come back [to Georgia], but it depends what kind of job I find in my home country,” Akhobadze told Eurasianet. “Here [in China] I have a better chance to find a high-paying job.”

Not long ago, Akhobadze’s would have been an unusual career path. But if the last generation of Georgia’s top students pursued education in Europe and America, a growing number are looking to China.

A report last year by the Tbilisi-based think tank Civic IDEA detailed the expansion in Sino-Georgian educational ties over the last decade, listing numerous Chinese-language programs and the many opportunities, often with generous financial backing, for Georgian students to live in China.

"Year after year, Chinese interest in Georgia grows and so does the scope and size of educational programs and cooperation in academia,” said the report, authored by former defense minister Tinatin Khidasheli. It called this part of a “a full-scale Chinese Communist Party ideological operation,” that includes influence over the media, civil society, telecommunications infrastructure, and business.

Khidasheli told Eurasianet that Georgia risks becoming economically dependent on China and a pawn in a great power competition emerging between China and the West. Already Chinese companies are breaking local labor and environmental laws with impunity. Yet most Georgian pundits are unaware of China’s inroads, she cautioned, "heavily preoccupied" as they are with Russia.

Educational ties between Georgia and China began in 1993, when the two governments signed an agreement on cooperation in science and technology.

Since then, several memoranda of understanding have governed student exchanges and language programs. In February 2019, Tbilisi agreed to begin offering Mandarin Chinese classes in fifth-grade classrooms as a second foreign language. The Education Ministry declined Eurasianet’s requests to discuss the project, which appears to have been put on hold by the pandemic.

The Georgian capital also hosts to two Confucius Institutes – Chinese-funded cultural and language centers based at universities around the world – with a third planned for Kutaisi. In an emailed response to questions, one of the institutes, at Tbilisi’s Free University, denied that ideology plays any roll in its curriculum, but declined to say more. The Chinese Embassy did not reply to requests for comment and none of the sources interviewed for this story could provide numbers for Georgian students going to China.

These academic ties have grown alongside a booming business relationship. Trade turnover has skyrocketed since the last economic crisis. While China enjoys a wide current account surplus, it became Georgia’s fifth-largest export destination by 2019; Georgia’s exports have more than doubled since a free-trade agreement came into force in 2018.

Between 2002 and 2020, Chinese investors spent $705 million in the country, according to Georgian government figures. In addition, Tbilisi has hired engineering giants like Sinohydro and China Railway 23rd Bureau Group to implement some of its priority transportation projects such as major east-west highways connected to Black Sea ports.

Beijing sees the South Caucasus "as its gateway to Europe. Because of that, increasing its influence in Georgia and building critical infrastructure is extremely important to China," said a report this year by the Georgian Foundation for Strategic and International Studies.

“China cannot be trusted and the state has many hidden agendas. For this reason, Georgia must be careful when dealing with the PRC,” the report, authored by sinologist Gvantsa Chachanidze argued.

Chachanidze herself returned to Georgia in 2019 from a semester at Hangzhou Normal University, where she was on a Confucius Institute scholarship.

She told Eurasianet that Communist Party “indoctrination” begins before students even leave for China, recalling how her Georgian lecturers at the Confucius Institute “warned students to avoid critical online posts about China if they wanted to get a scholarship.”

Georgia’s government is aware that China’s embrace of language students is not wholly altruistic, said Chachanidze.

Yet Tbilisi knows it needs specialists as it trades more with China and considers investment offers tied to the Belt and Road Initiative. As she wrote in her report, "Only a few people [in Georgia] understand China or know its foreign politics."

Some Georgians who have studied in China reject suggestions they may have been brainwashed or otherwise compromised.

Akhobadze, the history student, believes her experience has opened her eyes. "Even though I study the history of China, I do not remember a single time when someone talked about political ideology,” she said. “I think there is a much freer and more developed society [in China] than in Georgia. The communism in China is much better than the ostensible democracy we have in Georgia.”

Another language student, Ana Kavtaradze, who studied in Beijing in 2016 with funding from the Chinese Embassy, says she encountered no dogma.

"We studied various subjects, history, literature, economics, but the focus was still on the spoken language. We had very good teachers who thought freely. I did not feel that they were trying to turn any ideology on us. China has lived up to my expectations; very interesting and hardworking people live there. If I was given a chance, I would go back," Kavtaradze said in an interview.

Of course, education opportunities are welcomed in a developing country like Georgia. But sometimes Beijing turns to blunter messaging.

There are junkets for Georgian journalists to visit China, and some local outlets receive financial support directly from Beijing to praise its activities in the country. And then there’s oldfangled propaganda.

In June, Party mouthpiece China Daily published an op-ed by Jemal Putkaradze, the director of the Chinese Academy of Social Sciences outpost at the Georgian Technical University, lauding Sino-Georgian cooperation. Putkaradze’s script would be familiar to readers of Chinese advertorials around the region. Relations, he wrote, are "based on equality and mutual benefit, their collaboration has set an example of equality-based harmonious cooperation." (Reached by phone, Putkaradze, who describes himself as an advisor to Georgia's agriculture ministry, declined to comment.)

The op-ed claimed to be about the merits of Beijing’s epochal infrastructure bonanza, the Belt and Road Initiative, yet he found space to urge the Education Ministry to commence those nationwide fifth-grade Chinese classes.

“Under its wise and able leadership, China continues to amaze the world with its remarkable achievements,” he concluded.