Climate change, farming and a lack of cooperation risk another Aral Sea disaster. 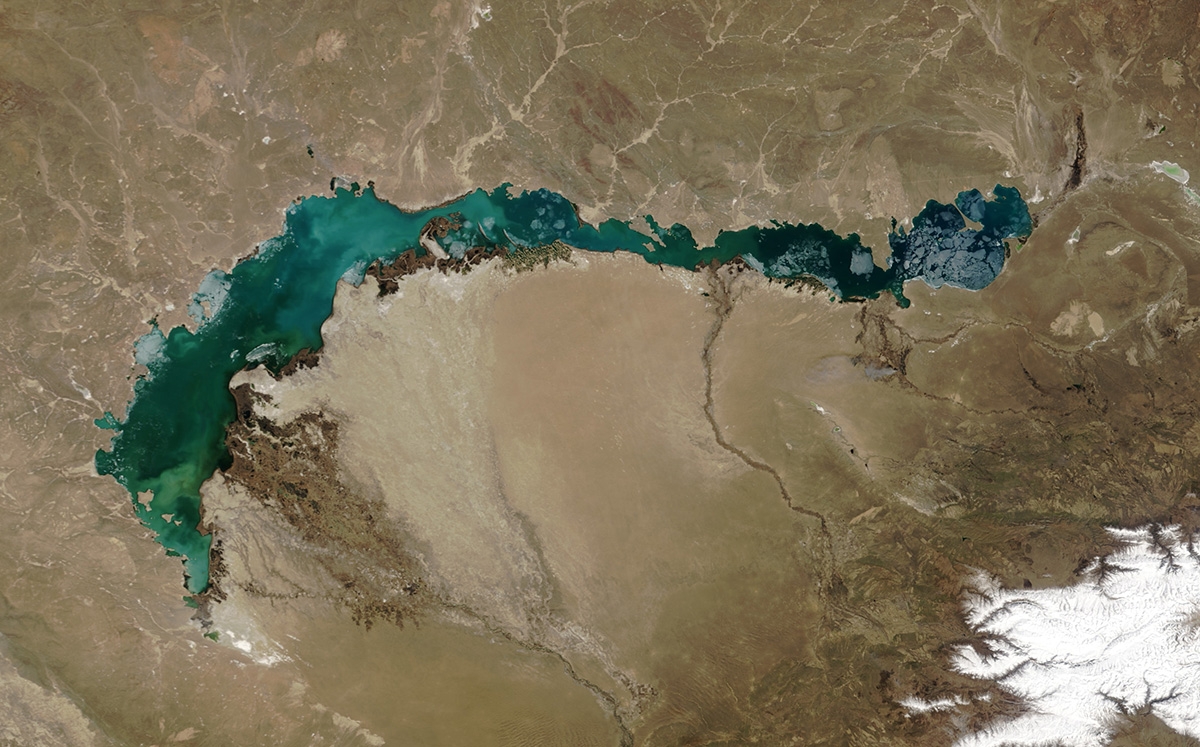 The demise of the Aral Sea is a tragic tale often told. Less known is the peril facing Central Asia’s largest remaining lake, Balkhash in eastern Kazakhstan, a key source of drinking water in an arid region. Rapid development and expanding rice cultivation upstream in China pose a grave threat to the Balkhash basin, a new paper says, and Beijing is dodging the problem.

The lake’s fate has quietly bedeviled Kazakhstan for decades. Just how bad it will get depends both on Chinese farming and the magnitude of climate change, which is all but certain to dispatch the last of the glaciers feeding the 1,500-kilometer Ili River, the source of 80 percent of the lake’s water.

Researchers at Oxford University ran 738 simulations combining possible changes in water consumption with 80 future climate scenarios, ranging from warmer and drier to warmer and wetter conditions. Most of the simulations point to the same grim conclusion, they write in the peer-reviewed journal Water: To save the lake, China would have to drastically reduce how much water it uses.

Both sides use water, of course, though the expansion of farming in China has far outpaced Kazakhstan’s in recent decades. “Currently irrigated agriculture in the lower basin [Kazakhstan] is small compared to the Chinese Ili Valley,” write Tesse de Boer and her colleagues. In 2020, an American-Kazakh-Chinese team using satellite data estimated that irrigated cropland on the Chinese side increased nearly 30 percent between 1995 and 2015; they found no significant increase on the Kazakh side in the same period.

The risks to Lake Balkhash could be mitigated by “sustainable expansion of agriculture upstream if parties cooperate and coordinate water use.” Yet that is not possible without data, which, the researchers point out, China is refusing to share.

The Ili begins in China’s Xinjiang province, a region currently in the global spotlight for its government-sponsored repression of local Muslims, abuses that several Western nations have labeled genocide. Increased transparency seems unlikely.

The Ili River valley is one of the most fertile in Xinjiang. A reduction in water consumption might be achievable with new, efficient technologies and by planting crops less thirsty than rice (and cotton, which Washington recently banned). That does not appear to be on the table. Instead, the authors cite Chinese “plans for more rice production” by “continued conversion of scrub and grassland into irrigated agricultural fields.”

Their findings are dire. In almost all of the simulations, the Ili’s level is below that needed to replenish Balkhash. Even current demand reduces the flow to less than the replenishment rate almost half the time, which may explain the “gradual degradation” of vegetation in the Ili delta over the last two decades. About half of the models show that within 40 years too little water will flow into the Balkhash to save the lake. “The combination of demand change with shifts in the climatic regime yield extreme outcomes” for the river’s reliability.

Certainly, Kazakh plans warrant more study, write de Boer and her coauthors. Previous research has documented poor management and widespread waste inside Kazakhstan. And Balkhash was almost destroyed in the 1970s when Soviet engineers built the Kapchagay Reservoir upstream from Balkhash to power Almaty, Kazakhstan’s largest city. As the reservoir filled, the level of Balkhash fell for 17 years. But it recovered by 2005.

This time the source of the problem is also clear, though the lack of will in China may be insurmountable with Beijing on the backfoot in Xinjiang and trying to steer international attention to its Belt and Road global development initiative (which, other researchers have warned, raises a host of water-related worries of its own). Similar concerns plague the Irtysh, the other major river flowing from China into Kazakhstan, near the border with Mongolia.

Chinese scientists are not entirely ignoring the Ili-Balkhash basin. A forthcoming paper sponsored by the Chinese Academy of Sciences examines effluent in the river, concluding that concentrations of pesticides on both sides of the border are “low to moderate, compared to concentrations in other rivers throughout the world.” Another new paper, also by government-sponsored scientists, examines changes to lakes in Kazakhstan. It mentions Balkhash once, in passing.