China has a lot to brag about. And a few things to hide. This and more in our monthly report on Chinese business in Central Asia. 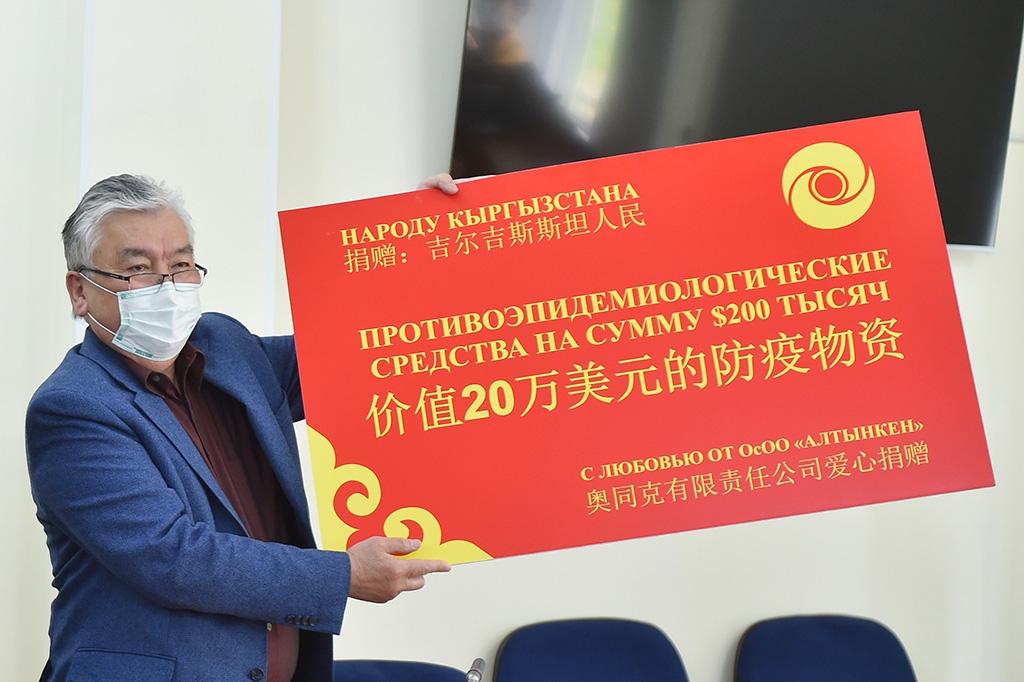 We have a winner: Kyrgyz Health Minister Sabirjan Abdikarimov receiving $200,000 worth of aid “with love from Altynken LLC,” a Chinese mining firm. (gov.kg)

If you read Central Asian media these days, you’ve heard that China is a good neighbor with deep pockets for friends in need. Chinese embassy press offices are throwing themselves into their work, spreading tidings of Beijing’s coronavirus-related generosity: thousands of tests, crates of PPE, teams of doctors.

The pandemic has also offered Chinese companies a chance to work the limelight in countries where they are routinely viewed with misgivings. On April 12 Zijin Mining handed Kyrgyz officials protective equipment and thermometers, said the Chinese Embassy in Bishkek.

Huawei, meanwhile, is expanding its “smart city” technology in the Uzbek capital. An April 3 account – published by newswire Podrobno.uz, but which reads like a press release – pointed out that the tech giant “did not leave Uzbekistan even in the most difficult time, during the fight against the coronavirus epidemic, providing the country's main air harbor with two thermal imaging cameras free of charge.”

China will certainly not be forgotten anytime soon, but Central Asia’s leaders will be needing cash infusions more than cameras.

Debt relief on the Belt and Road

Beijing has not formulated a plan to address "a wave of applications” for debt relief from countries belonging to its Belt and Road Initiative, the Financial Times reported on April 30. Chinese negotiators like to work bilaterally and prefer to “suspend interest payments” on loans, rather than write them off, one government advisor told the paper.

Kyrgyzstan is accustomed to slightly more forgiving treatment from its other principal suitor. Though Moscow’s last debt write-off three years ago may feel like ancient history, and Russia can fade into the shadow of China’s wallet, the Russian market hasn’t gone away.

For the first time in two years, Russia has, by a hair, retaken its historical position as Uzbekistan’s top trade partner.

China-Central Asia trade turnover crashed in the first quarter: down 47 percent year-on-year with Kyrgyzstan and about 20 percent each with Tajikistan, Turkmenistan and Uzbekistan, according to China’s own figures.

China is itching to get back to business, Chinese Commerce Minister Zhong Shan assured Uzbek Deputy Prime Minister Sardor Umurzakov during an April 15 call. The week before, a cargo train left coronavirus epicenter Wuhan with 216 Uzbekistan-bound Chevrolet Equinoxes, the first time completed cars were shipped to Central Asia by rail. China had stopped exporting the vehicles in February at the height of its own COVID-19 crisis.

Beijing is so eager to get back to normal that it may be quietly breaching Uzbekistan’s closed borders. Chinese workers have been slipping into the country on Chinese aid flights, RFE/RL’s Uzbek service, Ozodlik, reported on April 7. Hundreds of engineers, specialists and other workers arrived on four charter flights between March 30 and April 5 that had been advertised as carrying doctors and aid deliveries. Some were heading to a cement plant in Andijan, others to factories in Tashkent. All were apparently quarantined for 14 days on arrival. (It is unclear if other aid flights brought businesspeople to the region. Eurasianet’s search of Chinese sources shed little light on the matter. And this is not something those ebullient Chinese embassies appear keen to advertise.)

For any businesspeople who did make the trip, there are still plenty of projects to visit. Here are some of the biggest Chinese projects in the region this month: