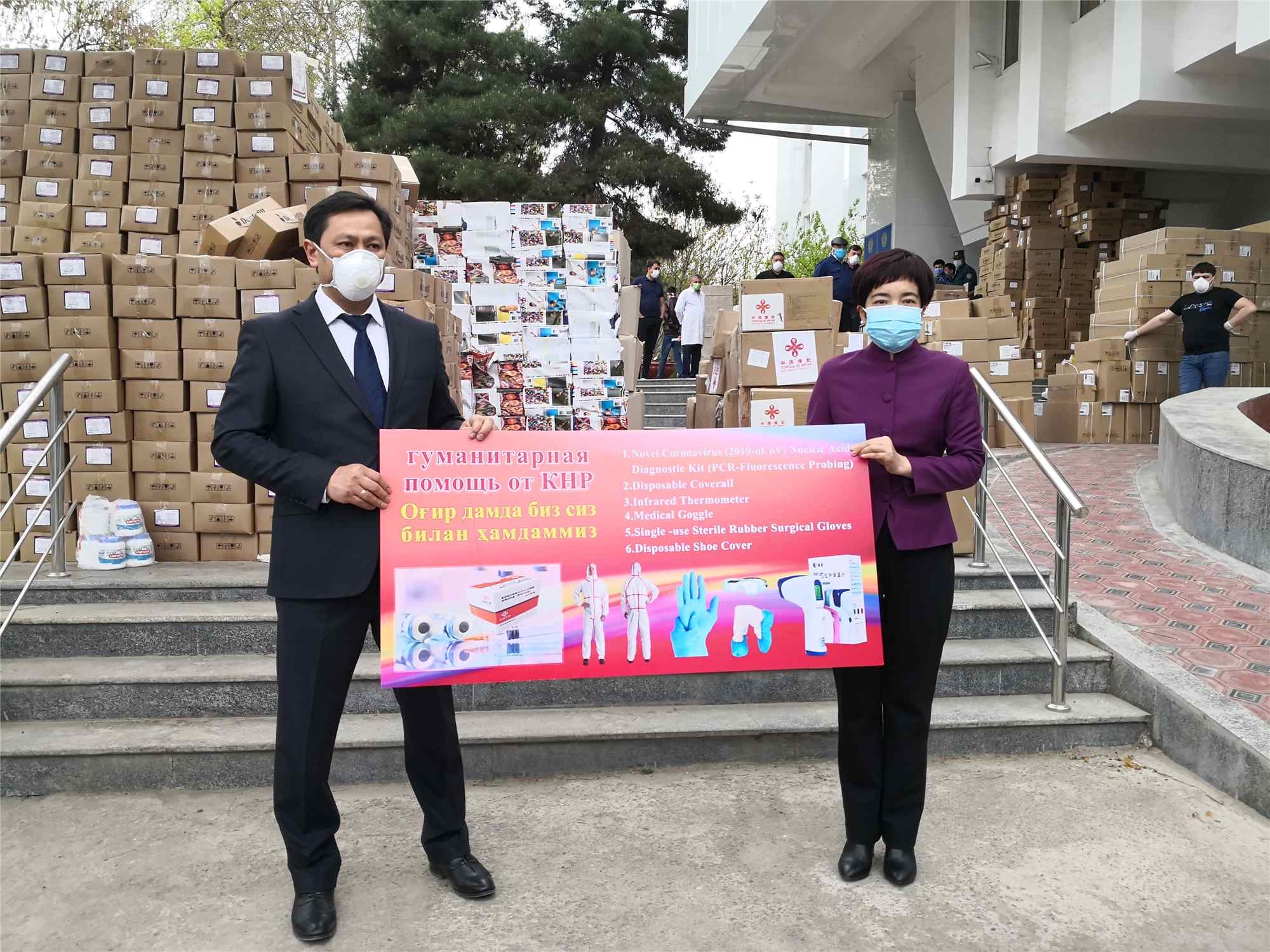 A friend with PPE is a friend indeed. (Chinese Embassy in Uzbekistan)

As soon as the nature of China’s battle with the novel coronavirus became apparent in January, the Central Asian states began slamming their doors. There was one thing they couldn’t keep out, however, and in March it took the region by the throat: economic panic.

On March 5, it came to light that PetroChina had issued a force majeure notice weeks earlier, slashing gas purchases from Kazakhstan, Turkmenistan and Uzbekistan. A few days later the Chinese Embassy in Nur-Sultan confirmed it had told producers it would buy 20-25 percent less gas in February and March. Data from a pipeline metering station at Khorgos on the Kazakh-Chinese border confirm the dip, showing that China imported only 7.6 billion cubic meters (bcm) of Central Asian gas in the year to March 7. In the first quarter of 2019 the figure was 11.5 bcm.

Kyrgyz Prime Minister Mukhammedkaliy Abylgaziyev said on March 15 that his country had lost 2.5 billion som (about $30 million) in customs duties since closing the border in late January.

These figures are beginning to unveil an economic crisis the likes of which Central Asia has not seen since independence. Coupled with the oil price crash, governments are facing massive budget shortfalls.

Soon after the first case of coronavirus in Central Asia was confirmed in Kazakhstan on March 13, Beijing set its messaging mandarins loose. China Construction Bank delivered the first batch of medical aid to Almaty on March 21, reported Xinhua. The second, from the Xinjiang government, arrived in Khorgos on March 27.

China is busier in Uzbekistan, where it has rapidly ramped up investment in recent years. A team of Chinese doctors arrived in Tashkent on March 26, sent by China’s Jiangxi province government. On the same day, a group of Chinese companies working through the Uzbekistan-China Chamber of Commerce transferred the first batch of medical aid to the Chinese Embassy in Tashkent, according a press release. On March 30, another batch of medical aid arrived on Uzbek military planes, courtesy of China’s biggest defense equipment suppliers, including NORINCO, Hytera and China Policy Group, Sputnik reported.

So far, Kyrgyzstan’s pleas for Chinese doctors have gone unanswered. Xinhua reported, however, that the first delivery of Chinese medical aid, from the Kizilsu Kyrgyz Autonomous Prefecture government in western China, arrived at the Torugart Pass border crossing on March 26. Billionaire Jack Ma, founder of Alibaba Group, has also reportedly committed medical aid to Kyrgyzstan, Uzbekistan and several other countries.

The first delivery of Chinese medical aid to Tajikistan, including personal protective equipment and 2,000 COVID-19 tests, arrived at the Kulma Pass border crossing on March 30, said the Chinese Embassy in Dushanbe. Tajikistan has reported no cases of the virus, though its testing capability has come under scrutiny.

While trade with China slowed, the pandemic had not completely cut business ties with Central Asia’s largest economies, Kazakhstan and Uzbekistan, before they registered their own cases of COVID-19 in mid-March and ordered most people to stay home. A few deals that went down this month:

Housebound Kazakhs can take their minds off COVID-19 for a spell with the hit Chinese series All Is Well, now available dubbed into Kazakh on Astana TV, Xinhua reported on March 23. The soap opera broke taboos in China for exploring generational conflicts resulting from the one-child policy.