The first in a series of briefings on Beijing's investments in Central Asian renewables. 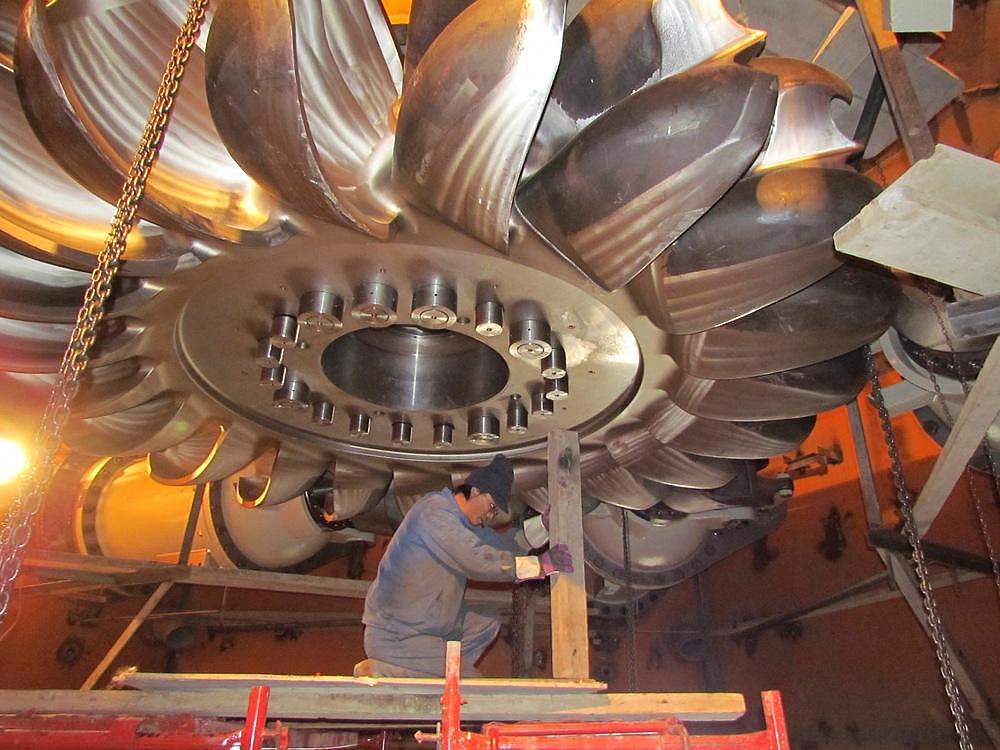 A worker installs a turbine at the Moynak hydropower plant in Kazakhstan’s east. (Moynak GES handout)

Any investor wishing to stay friendly with all five Central Asian republics knows to steer clear of major hydropower projects.

When the five countries were part of the Soviet Union, interdependence worked: Moscow built some of the world’s tallest dams in upstream Kyrgyzstan and Tajikistan; downstream Kazakhstan, Turkmenistan and Uzbekistan shared their abundant oil and gas when the rivers froze in winter.

Since the Soviet collapse in 1991, water has been a stubborn source of disquiet in the land-locked region. Uzbekistan’s former president even threatened war over a dam project upstream in Tajikistan.

While Moscow has made and broken many a promise to fund major hydropower projects in the independent countries (a new cascade in Kyrgyzstan, a Guinness Book-worthy dam in Tajikistan), Beijing has invested with caution, focusing instead on helping downstream Kazakhstan and Uzbekistan develop their hydro potential. This strategy is acceptable to all, while not overtly aiding Washington’s efforts to link Central Asian energy to development in South Asia.

Any upstream Chinese assistance is multilateral, as the World Bank and Asian Development Bank patch aging Soviet infrastructure, such as Toktogul in Kyrgyzstan and Nurek in Tajikistan – giant dams built to have a capacity of 1200 megawatts (MW) and 3000 MW, respectively.

By working downstream, China avoids the dicey politics, while also helping its economic partners – besides their hydrocarbons, Kazakhstan and Uzbekistan are also the region’s biggest markets – bolster their water and energy security.

For decades after independence, Kazakhstan grew rich on oil and gas, while its hydropower infrastructure suffered a familiar kind of post-Soviet neglect.

That changed in 2012 when China International Water & Electric Corporation (CWE) completed the 300-MW Moynak hydropower plant, located between Almaty and the Chinese border – a major contribution to Kazakhstan’s energy security.

“Construction took only five years. It is a miracle in Kazakhstan history,” chief engineer Kalaubek Baimukhanbetov told Chinese state television for a 2018 documentary.

Moynak cost $330 million, to which the China Development Bank lent $200 million. State-run CWE was tasked with the design, construction and then trained 40 Kazakh engineers before transferring the entire site to Kazakhstan in 2013. (The next year CWE was sanctioned by the World Bank for misconduct in Africa and Southeast Asia).

Moynak “can provide enough electricity for all the households in Almaty,” Yu Qiang, CWE’s deputy chief engineer in Kazakhstan, told the 2018 documentary. “Before the Moynak project, the south of Kazakhstan imported electricity from Kyrgyzstan,” Yu explained. After Moynak went online, the south “became self-sufficient.”

Moynak’s success has whetted appetites in Nur-Sultan. In December 2014, CWE inked more deals to build dams along the Ili and Shilik rivers in the east of the country, though ground has not yet been broken. Some officials have discussed transporting Kazakh power to China.

In late 2018, CWE completed a small, 25-MW project at Turgusun on the Irtysh River in northeastern Kazakhstan, for which Nur-Sultan paid $23 million. Construction has begun on the 20-MW Turgusun-2. A proposed Turgusun-3 would add an additional 115 MW.

The largest Chinese hydro project in Central Asia would be a five-dam, 480-MW cascade on the Tentek River in Almaty region. State-owned China Gezhouba Group Corporation announced the $1.5 billion deal with Kazakhstan's Arai-Oil company in December 2018, but the company still appears to be negotiating financing with Chinese banks.

With all this additional supply, Kazakhstan has, in less than a decade, transformed from net-electricity importer to exporter. It is now trading electricity for Kyrgyz water. Chronically dysfunctional Kyrgyzstan is habitually short of power for its own needs and Bishkek hopes to import even more this winter, fearing that with migrants returning from Russia during the coronavirus economic crisis, demand will far outstrip supply.

Uzbekistan has slightly less installed hydropower capacity than Kazakhstan. And though renewables account for only about 3.2 percent of the country’s current production, Tashkent has pledged to produce some 25 percent of its electricity with renewables, largely hydropower, by 2030.

Chinese fingerprints are all over the plans.

But Chinese-Uzbek cooperation has flourished since the death of isolationist President Islam Karimov in late 2016. Within three years, Beijing had allocated $144 million in loans for hydropower projects, Podrobno reported. One deal, signed at a summit of the Shanghai Cooperation Organization in Qingdao in 2018, saw China’s Exim Bank loan $63 million to modernize five dams, including three in Tashkent and the Fergana Valley earlier this year.

Also powering the capital, Dongfang Electric Corporation completed construction in 2019 of a new $15.8 million, 11.4-MW hydropower station at the Tuyabugiz reservoir south of Tashkent with $8.1 million in financing from China's Exim bank.

Midwifing friendship in the Zarafshan Valley

What is perhaps the most exciting Uzbek project is not happening inside Uzbekistan.

Since Karimov’s death, tensions over water have abated. Tashkent has resumed supplying Dushanbe with gas, and the two reached a promising agreement earlier this year to build 275 MW of capacity on the Zarafshan River in Tajikistan to supply nearby parts of Uzbekistan.

A common view among Chinese scholars of Central Asia – based on a mix of earnest research and indolent patriotism – is that Beijing has long wanted to ease tensions between Uzbekistan and Tajikistan. Central to this idea is that China, a demonstrated master of hydropower, is well positioned to export this technology, cheaply, to its neighbors. Since the 1990s, Beijing has been eyeing the potential of the Zarafshan River, which flows from Tajikistan into Uzbekistan near Samarkand.

As early as 2000, state-owned Sinohydro opened offices in the two countries. In 2007 Tajik President Emomali Rahmon signed a deal with Sinohydro to build two dams on the Zarafshan as part of a $1 billion investment package secured during a visit to Beijing. Quite likely because of Karimov’s aversion, however, the project never materialized.

With Karimov out of the way, now China is overseeing cooperation between Tajikistan and Uzbekistan on the two-stage, $550 million Zarafshan project. Tajikistan will get more gas. Uzbekistan will get the electricity – and a say in the water-release schedule. China will get a new role: arbiter of the friendship of peoples in Russia’s backyard.

*Correction: The Irtysh flows from China into Kazakhstan, not the other way.