Ovalbek Turdakun’s passage from Kyrgyzstan to the United States was helped by two members of Congress. 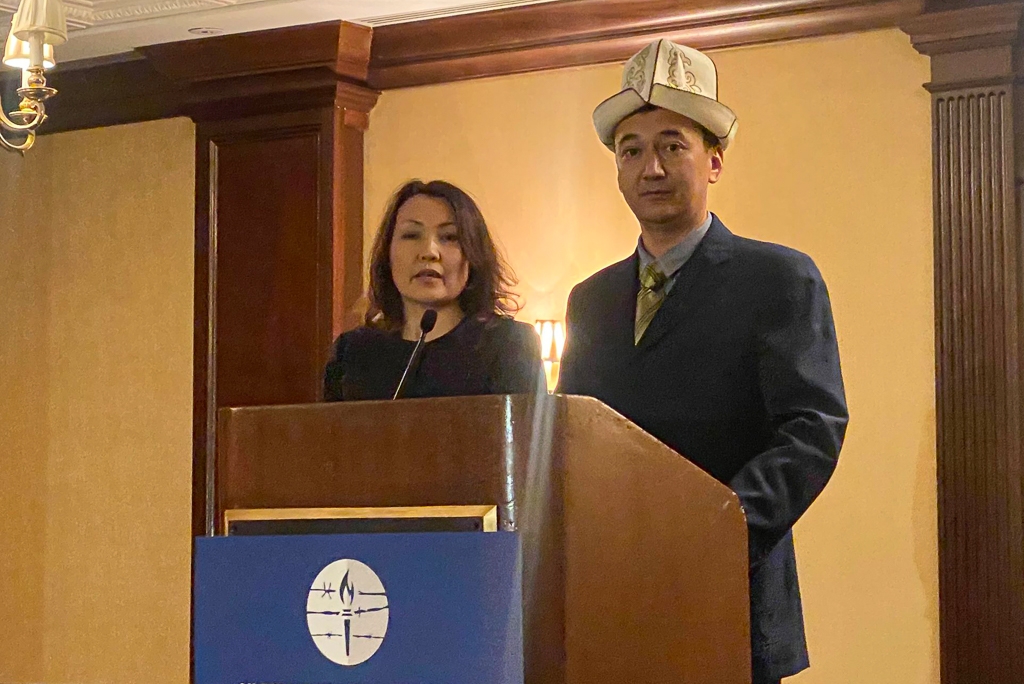 Washington-based Chinese Muslim exiles say that testimony from a former detainee in Xinjiang will help them convince the world that China’s repressions of minorities amount to crimes against humanity.

Ovalbek Turdakun, an ethnic Kyrgyz Christian from Xinjiang, arrived in the United States from Kyrgyzstan earlier this month after lobbying from several members of Congress.

In 2018, Turdakun spent 10 months in a Xinjiang prison camp where he says he was interrogated in shackles, psychologically and physically tortured, and kept under constant surveillance.

“I was forced to sign documents without having time to review them, formally admitting any crimes that they assigned to me,” he said at an April 13 press conference in Washington. “The more you oppose these accusations, the more you stay in a crowded cell, where some inmates must keep standing in order that others can sleep.”

Turdakun said he was then confined to house arrest for about a year. In December 2019 he was allowed to cross the border into Kyrgyzstan, where his wife, Zhyldyz Uraalieva, is a citizen. Turdakun stayed in Kyrgyzstan for over two years with a residence permit. The Kyrgyz government stopped renewing it in December 2021, however, putting him at risk of deportation back to China.

A 2021 report by the Uyghur Human Rights Project examined how Beijing has successfully pushed pliant countries like those in Central Asia to deport its citizens.

“Turdakun was one of a few who escaped the deportation. We managed to reach U.S. lawmakers to accelerate the visa process to get Turdakun’s family to the U.S.,” said Salih Hudayar, the head of the Washington-based East Turkistan Government in Exile (ETGE), an advocacy group.

Senator Marco Rubio (R-Fla.) and Representative Chris Smith (R-N.J.) pressed the State Department and the Department of Homeland Security to expedite the family's travel to the U.S., Axios reported. Both have expressed hope that Turdakun’s testimony will help build a case against Beijing.

“Senator Rubio was glad to advocate on behalf of Mr. Turdakun as his testimony will expose the Chinese Communist Party’s genocide,” a spokesperson told Eurasianet by email.

In a visa-support letter seen by TechCrunch, Smith reportedly wrote that he expects the former prisoner to testify about the Chinese government’s use of technology “to facilitate gross violations of internationally recognized human rights.” Smith’s office did not reply to a request for comment.

Hudayar of ETGE says he is the first Christian to speak out about his detention in the Xinjiang camps and the first witness who has agreed to testify before Congress publicly. Rubio’s office could not say when the testimony is expected.

Ethnic Kazakhs, Kyrgyz and Uyghurs have fled in significant numbers to neighboring states in Central Asia since China began constructing a network of prison camps across Xinjiang in the last decade.

Rights activists have urged the International Criminal Court in The Hague to hold China accountable for what the Biden administration has called “genocide.” In December 2020, the ICC said it did not have the jurisdiction because China is not a party to the court.

But ICC prosecutors signaled willingness to consider evidence collected in third countries, such as Tajikistan, which has ratified the 1998 Rome Statute establishing the court. (Kyrgyzstan has signed but not ratified the treaty; the U.S. withdrew its signature under George W. Bush.)

To collect that evidence, “we have hired investigators on the ground in Kyrgyzstan and Tajikistan through our lawyers in Europe to figure out whether Central Asian governments have been helping the Chinese government deport ex-detainees who escaped from Xinjiang,” Hudayar told Eurasianet. “As a result, our investigators found out that nearly 3,000 Uyghurs in Tajikistan were forced back to China between 2016 and 2018.” He estimates Kyrgyzstan deported around 4,000 Uyghurs to China in the same period.

This could be the proof ICC prosecutors need to press a case.

"If Chinese security agents come into Tajikistan and Kyrgyzstan and are arresting people there and bringing them back into China to put them into camps – the ICC has jurisdiction over the entire crime," international human rights lawyer Rodney Dixon told Axios. “It’s both the arrests and deportations and the enforced disappearances and inhumane acts that are perpetrated when they get to China.”

China is the biggest investor in Central Asia by a wide margin and the region’s governments have struggled to balance lucrative ties with local anger at the treatment of co-ethnics in Xinjiang.

This is especially apparent in Kazakhstan, where Sinophobic sentiments have proven a reliable rallying call for government opponents. Many ethnic Kazakhs from China have emigrated in recent decades, attracted by a government resettlement program. Families still straddling the border have been among the first to shed light on China’s abuses.

One such whistleblower was Sayragul Sauytbay, an ethnic-Kazakh Chinese national who had been held at a political reeducation camp in Xinjiang. In 2018 she was arrested after crossing into Kazakhstan with forged papers. The Kazakh government threatened her with deportation, but eventually allowed her to leave for political asylum in Sweden.