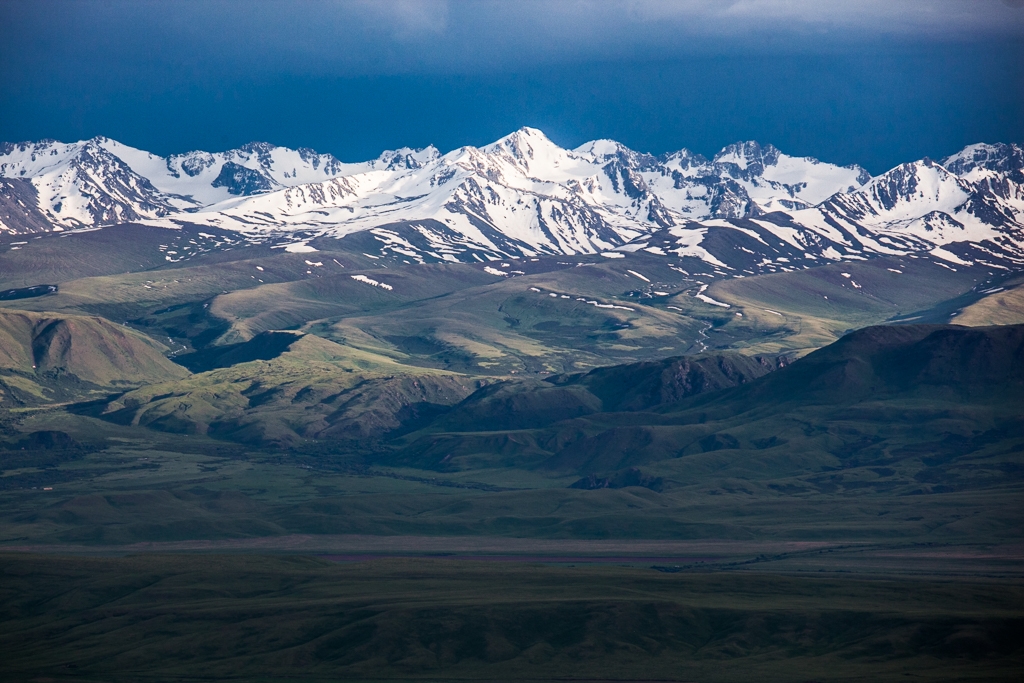 Over 80 percent of glaciers in the Tien Shan have shrunk or disappeared. (photo: David Trilling)

From headwaters to deltas, Central Asia’s rivers are running dry.

Two new papers by Chinese scientists, looking at opposite ends of the region’s two major river basins, confirm that climate change is leaving a mark on Central Asia with profound economic consequences.

That the papers are funded by the Chinese government underscores Beijing’s many interests in the region. Some rivers cross China’s border, fueling tensions over water usage. A region-wide drought last summer inflated food prices and prompted Kyrgyzstan to keep more water for itself – while China builds hydropower plants downstream. And recurring clashes over water in the Fergana Valley threaten to explode into a wider conflict between Tajikistan and Kyrgyzstan, two failing states bordering Xinjiang. Chinese scholars annually publish dozens of papers on hydrological patterns in this vast region stretching from the Caspian Sea to central China.

First, the glaciers. In the early 20th century, before the current, human-caused wave of climate change, when nature operated in something like an equilibrium, the glaciers of the Tien Shan mountains offered a predictable pattern: In winter, snowfall would add to the icepack; in summer, a portion of that ice would melt and feed the rivers, refill reservoirs and supply irrigation water for farmers a thousand miles away.

That balance has broken, say Hongyu Wang and colleagues in a March paper for the journal Water, “Variations in Glacier Runoff Contributed by the Increased Negative Mass Balance over the Last Forty Years in the Tien Shan Mountains.”

Whereas for a few decades the downstream farms and hydropower dams enjoyed extra water flows in summer (i.e., above the historical average), river levels are now lower and less predictable, they find.

Most glaciers in the Tien Shan are shrinking and disappearing. In some cases, the amount of water the glaciers discharge each summer has peaked and begun to decline.

Because it is impossible to measure every one of thousands of ice fields constantly, Wang and colleagues use high-resolution satellite imagery and river discharge measurements to test established computer models. Building on and confirming previous research, they measure changes across the Tien Shan.

They have established that while most (80 percent) of the glaciers in the Tien Shan are losing mass, those in the Ala-Too range above Bishkek, and parts of the Dzungarian Alatau in eastern Kazakhstan (20 percent of the total), appear to be stable or even growing after rapid loss earlier this century.

Wang and colleagues also note that precipitation has increased. In winter, this helps the formation of glaciers. But overall warmer temperatures and longer summers have eroded any gains to glacier mass over the past 40 years. There is more of a correlation between shrinking glacier size and warmer temperatures than between growing glacier size and precipitation. Most of the extra precipitation falls as rain in the warmer summer months (July and August), when it speeds the melting of ice.

The second paper looks at water demand and scarcity in the Amu Darya delta, where the river once sustained the southern Aral Sea.

The Amu Darya’s water flow in Uzbekistan’s Khorezm and Karakalpakstan regions fell 60 percent between the 1970s and the 2010s, report Zheng Wang and colleagues in an article in the International Journal of Environmental Research and Public Health, “Analysis of the Water Demand-Supply Gap and Scarcity Index in Lower Amu Darya River Basin, Central Asia.”

Demand over this period outstripped supply by 72 percent, on average. More recently, both demand and supply have fallen – but only with some fancy math: The authors write off the Aral Sea and adjacent wetlands as dead. By setting aside the needs of the Aral – because it essentially no longer exists here – the authors report that shortages have fallen dramatically, even as agriculture continues to demand more water. This way, on a water scarcity index, the situation has "changed from awful to serious."

Yet they are unequivocal about the problem: “There is a huge waste of water in the process of agricultural production,” and farmers must adopt more efficient irrigation methods. Only about 7 percent in Khorezm and Karakalpakstan have adopted water-saving technologies.

Because so little water in the Amu Darya reaches this region, it is now dependent on what falls from the sky. Fortunately for residents, climate change is bringing more rainfall to the region – though it is still far from enough to meet the needs of cotton, wheat and rice plantations. And climate change is also shortening the growing season.

The bottom line: “Water resources are the primary limiting factor for the socio-economic development of the study area,” along with “the fragile ecological environment of the arid zone.”