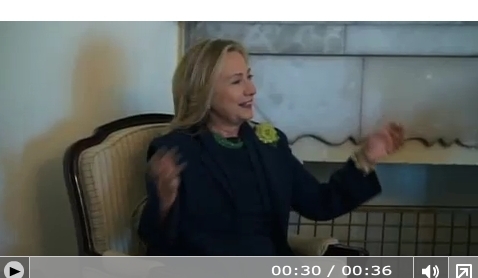 Secretary of State Hillary Clinton headed off to Uzbekistan this weekend as part of her tour of Central Asia which included a surprise visit to Afghanistan Thursday.

While chatting with President Hamid Karzai in Kabul yesterday, Clinton took time to joke about a recent humorous incident in the United States, when Republican presidential candidate Herman Cain told reporters that he didn't know who the president of "Uzbeki-beki-beki-stan-stan" was -- and didn't think it mattered because it had nothing to do with creating jobs.

Karzai listened to Clinton's anecdote about Cain and commented, "That isn't right, but that's how politics are" (see the video at the Washington Post here.)

Pundits are now endeavoring to explain to Cain just why Uzbekistan's president Islam Karimov is important -- because of the Northern Distribution Network (NDN), the supply line to US and NATO troops in Afghanistan.

The US is now intensively engaging with Karimov, a dictator who has held his country in thrall for 22 years, sending thousands of devout Muslims to prison for their religious activity outside of state confines, and jailing dozens of independent journalists and human rights activists for trying to report on the massive human rights violations.

Recently the Obama Administration persuaded the Senate Appropriations Committee to lift restrictions on military aid to Uzbekistan, in place for 7 years over severe human rights problems in Uzbekistan, in order to help bolster the NDN, proffered to Uzbekistan as an opportunity to build stability and prosperity in a new US-backed "Silk Road".

Alarmed at what they saw as an abandonment of principles, US human rights activists appealed to Clinton in September to raise Uzbekistan's many human rights problems of political imprisonment, torture, suppression of the media, and forced child labor in the cotton industry. Labor unions and rights groups also picketed a high-profile conference at the American Uzbekistan Chamber of Commerce of State Department officials, visiting Uzbek Foreign Minister Elyor Ganiev, and American corporations doing business in Uzbekistan such as Honeywell and General Motors.

Clinton is scheduled to visit the General Motors plant in Tashkent during her visit.

On the eve of her visit, again a coalition of human rights advocates, labor unions, retailers and investors addressed an appeal to Clinton, urging her to raise with the Uzbek government its failure to admit a delegation of the ILO into Uzbekistan to inspect the cotton fields. Andrew Stroehlein of the International Crisis Group has called the Uzbekistan's mobilization of students to pick cotton, documented extensively this year by Uzbek human rights monitors, "The world's largest state-run program of forced child labour."

Just as the activists' new appeal went out, the State Department responded with an answer to their past letter of September 27. In a letter obtained by EurasiaNet dated October 18, Robert O. Blake, Assistant Secretary of State for South and Central Asian Affairs replied that the Department of State "actively seeks to improve Uzbekistan's democratic and civil society development and its record on human rights" yet implies that "national security interests" must take priority:

Congress has prohibited the use of foreign assistance funds for assistance to the central Government of Uzbekistan unless the Secretary of State determines and reports to Congress that Uzbekistan is making substantial and continuing progress on specific issues related to promotion of democracy and respect for internationally recognized human rights. We have not thought it appropriate up to this point to provide such a certification, and have continued to provide limited assistance that involves working with Uzbek government institutions -- in such areas as counternarcotics, health, and nonproliferation -- by using certain available notwithstanding authorities and in consultation with Congress.

The Department of State remains concerned over continued reports of the Uzbek government's widespread use of forced child and adult labor in the centrally managed cotton harvest, including the harvest that is being conducted now. I and other Department principals raise this issue frequently with the government, including our urging the government to allow credible, outside parties (such as the International Labor Organization) to monitor the cotton harvest.

"Currently, the statutory restriction cannot be waived on national security grounds," nevertheless Blake explains. The new legislation would give the Secretary of State authority to waive the restriction as "in the national security interest of the United States" -- although currently the draft legislation mandates six-month reporting to review possible corruption in contracts, and an annual human rights examination. The purpose, says Blake, is to "provide defensive non-lethal equipment to enhance Uzbekistan’s ability to protect its border with Afghanistan, through which cargo destined for U.S. forces flows."

In a press conference following her meeting with Uzbek Foreign Minister Elyor Ganiev, Clinton claimed that Uzbekistan seemed to be making progress.. Human rights groups were puzzled, as they couldn't see the improvements or even what State could have meant by them. Blake now actually contradicts this in his letter:

This limited waiver and the provision of defensive border protection equipment to Uzbekistan would not in any way diminish our efforts to encourage respect for human rights in Uzbekistan. It also does not state that we think Uzbekistan has made substantial or adequate progress to date.

According to the Uzbek government, trade turnover between Uzbekistan and the United States grew from $100.3 million in January-June 2010 to $131.5 million in the same period of 2011. So the amounts of trade are not large, and the military component more symbolic than anything. Nevertheless, it's a victory in the Uzbek government's quest for legitimacy, and it remains to be seen whether the US can leverage Tashkent's desire for international respectibility into some actual human rights progress -- or even some of those jobs Herman Cain was concerned about.