Clubbers in Uzbekistan revive the art of partying hard

Lola Karimova, a wealthy daughter of the late president, helped jumpstart the scene. Now a DJ collective is creating a vibe all its own. 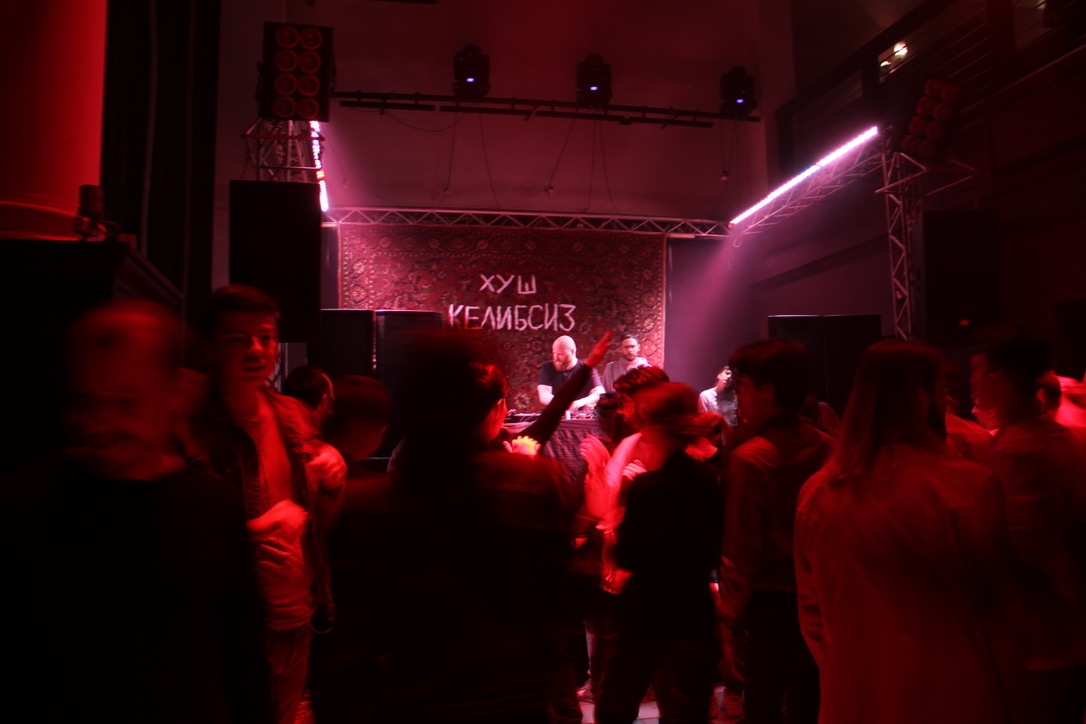 The throbbing electronic music emanating from Tashkent’s KtKomba club made for an odd contrast with the bucolic calcite-green stream burbling past. Inside, hundreds of young people danced through the night at an event the likes of which Uzbekistan rarely sees.

At the back of the stage, where well-known Norwegian DJ Skatebard and Moscow-based Rozet were among the acts, a large hanging Uzbek carpet was decorated with cotton balls woven into the words khush kelibsiz – “welcome.”

It was as much a greeting to the party, which took place on March 23, as to what organizers from the Fragment collective hope was the dawn of a reenergized club culture.

Fragment, a group of five local DJs, has been working tirelessly since they formed in August to – as they put it – give local people a taste of freedom through dance.

Aleksandr Mekhonosh, who performs under the stage-name Shilo, was appalled to find such little life in Uzbekistan’s capital went he returned in 2016 after living and deejaying in Dubai.

“There was no proper music played by DJs at the venues, only commercial pop with all venues playing the same songs,” Mekhonosh told Eurasianet. “All bars looked alike with the same atmosphere and high prices targeted at the golden youth of the capital.”

Fragment’s first major initiative was Stihia, a festival held on what used to be the shores of the Aral Sea. They have since been holding parties at Tashkent’s Sila bar, a place that event-organizers call a haven from the often-conservative strictures of Uzbek society.

“As a person who lives in this city, I don’t see enough options. I want my friends to come from abroad and feel comfortable. And for the locals to feel the same. We’re building a modern country,” said Yury Khodjayev, who goes by the moniker SHMN onstage.

The night at KtKomba was intended as a breakthrough.

“DJs like that have never come to Uzbekistan before – only for Stihia,” Khodjayev said. “There is always a chance that this music will not be understood. We are the first ones and we are doing our best.”

KtKomba is a little piece of Tashkent party history. In the early 2000s, it blazed the trail in bringing club culture to the city. It was the first venue in Uzbekistan with a western-style dress code, face control and go-go dancers.

It helped that the owner was Lola Karimova, a wealthy daughter of the late president, Islam Karimov. No expense was spared fitting the finest sound equipment and lights. The priority was not to turn a profit, but to create a venue where clubbers could be themselves. World-famous acts like Busta Rhymes and David Guetta performed there.

“Thanks to KtKomba, there was nightlife in Uzbekistan … the way we know it today,” says Anna Belozerova, a former regular at KtKomba. “It was the only place one could go and have a good time.”

The venue’s summer room was lined with tapchans – the kind of raised seating platforms one sees all over Central Asia – with a view over a waterfall. There, partygoers would relax as they waited for the sun to rise.

“Everyone was in KtKomba till the morning, and then we would all go to Chigatay to eat shashlik at six,” Belozerova said, referring to a neighborhood in northwestern Tashkent. “It was a sacred tradition, like going to church on Sunday.”

With time, KtKomba changed, as did its clientele.

In 2011, it closed and then reopened as a larger venue able to accommodate 700 people. Crowds still turned out and international DJs sometimes played, but the club lost its original character.

The sunrise-watching spot was transformed into Le Terrace, an expensive restaurant, where former clubbers – now grown-up professionals – would come to dine out of sheer nostalgia. The restaurant folded in 2018.

When KtKomba itself closed in 2016, it left a vacuum in the nightlife scene. The Fragment collective hopes it can now take over where KtKomba left off. Holding their event there felt like a passing of the baton.

The Fragment crowd are uncertain about KtKomba’s future, but they are hopeful the space does not lie idle.

“This is an important place. We would like to bring it back to life. We want the city to live,” said Khodjayev. “There is Bassiani in Georgia, and we want to make a place in Tashkent that would be similar, a place people would talk about.”

As for Fragment, what awaits is more events at the Sila bar and another edition of the Stihia festival, which should happen in August. Khodjayev is about to launch his own music program on a local radio station.

Followers sense this is the beginning of something new.

“Nightlife culture in Uzbekistan is not developed, and Fragment is trying to revive it,” Belozerova said. “They have started very well.”