Collapse of money transfer system takes Tajikistan back to the past

Wire companies that transfer billions in remittances to Tajikistan each year have largely been unavailable since December 3, following regulatory action by the National Bank of Tajikistan. 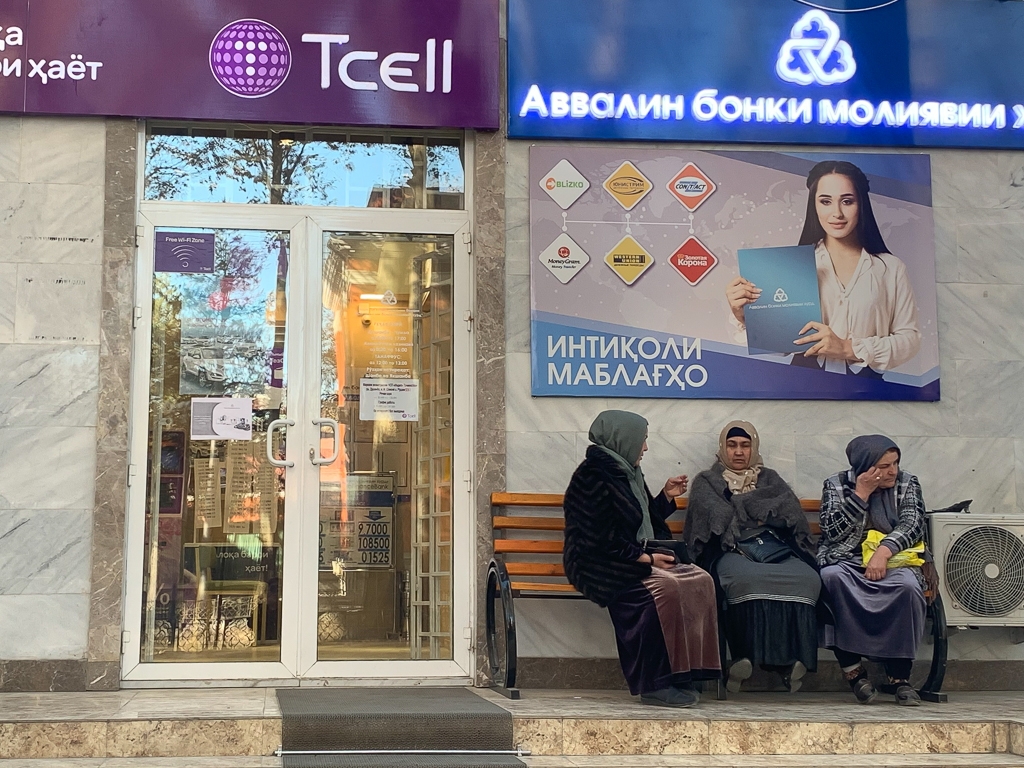 Women sit outside a bank in Dushanbe (Eurasianet)

The recent collapse of the money transfer system in Tajikistan is already spreading pain.

Zebo, a resident of Dushanbe, regularly sends cash to her brother, Sino, who lives and studies in Moscow. The money goes toward rent, fees and other costs.

But the most popular methods of conveying those payments – wire companies like Russian-owned Zolotaya Korona, Western Union and others – have largely been unavailable since December 3 following regulatory action by the National Bank of Tajikistan, or NBT.

Authorities have promised that the situation will be resolved imminently, but bills need to paid. Tired of waiting, Zebo found another solution. She transferred funds onto a Tajik-based online wallet, and then transferred the funds to a digital wallet operated by Russia tech company Yandex. From there, the money was moved onto a Russian bank card. In doing so, six cents were shaved off every dollar. The money transfer companies most commonly used by Tajik clients typically charge around 1 percent.

This convoluted arrangement has been necessitated by the NBT’s decision to require all money transfer companies to open accounts with them. In effect, the companies are required to forecast in advance how much money they expect to transfer and to deposit that amount with the NBT.

Zebo’s case is an anomaly. The overwhelming majority of money flows are not going to Russia, but rather coming from there. The Central Bank of Russia has said that around $2.5 billion were remitted from Russia to Tajikistan in 2018 – equivalent to almost a third of Tajikistan’s GDP. That money, largely sent by migrant laborers to families back home, is a literal lifeline to both the population and the economy as a whole.

Since the NBT enacted its new rules, large lines have formed outside banks as customers try to work out how they are going to receive money.

"My son goes to a private school, and at the beginning of each month I have to pay 900 somoni ($90),” Sitora, who was waiting outside a branch of Orionbank, told Eurasianet. “When there are delays in payment of monthly fees, the bullying begins. [Teachers] publicly ask the children when they are going to hand over the money.”

Despite growing complaints about families struggling to pay for food bills and other basic necessities, the NBT is sticking to its guns. It has, in fact, claimed that a number of money transfer companies, such as Unistream and Contact, have already abided by the rules and been integrated into what has been dubbed the National Processing Center.

As of December 12, the services of Unistream and Contact were not available to Tajik customers, however. Those companies’ apps do not acknowledge Tajikistan as an available recipient country. Eurasianet’s requests for clarification from a whole array of money transfer companies have gone unanswered.

The NBT’s rationale for its new processing system is that it will afford greater financial security to local banks. When recipients of transfers cash out, the actual money is paid upfront by local banks, which are then recompensed periodically by the wiring companies.

In making his case, the deputy chairman of the NBT, Jamoliddin Nuraliyev, who is also President Emomali Rahmon’s son-in-law, has pointed to the experience of companies like Lider and Migom, two money transfer companies that went bust while owing money to Tajik banks.

"This system has no analogue. It will protect the interests of consumers," Nuraliyev has said in interviews to local television.

An extension of that argument is that the Tajik market is overwhelmingly controlled by one company – Russia’s Zolotaya Korona, which accounts for around 82 percent of wire transfers. This near-monopoly hold over the market poses an economic security risk in Nuraliyev’s view.

Local banks in Tajikistan are now eagerly encouraging customers to apply for bank cards, onto which people in Russia will be able to make payments, thereby circumventing the services of money transfer companies.

An economist who spoke to Eurasianet on condition that he be identified by the pseudonym Saifiddin Jurayev said that nudging people toward greater use of cards is in line with a broader government strategy. The thinking is that limiting the circulation of cash will ensure the stability of the slowly depreciating national currency.

“It is advantageous for the NBT to promote cashless transactions. But the question is, how much is the Tajik market ready for a cash-free system? Can you go to the bazaar and buy groceries with your card? The answer is no," Jurayev said.

The cards being eagerly offered by Tajik banks are not associated with major international systems like Visa and Mastercard, which also limits their use for online transactions.

Bank machines in Tajikistan are often without cash, so if a cardholder desperate for liquid funds is forced to resort to the ATM of an institution in which they do not bank, they will have to pay transaction fees.

Abdumannon Sheraliyev, a Tajik economist based in Ukraine, said the NBT may, despite its assurances to the contrary, decide to use its planned role as a spigot for all money transfers to raise money through commissions.

“As a result, the commission of transfers will increase by at least 1 percent or even 2 percent,” Sheraliyev told Eurasianet.

But the prospect of a quick resolution looks faint since faith among foreign financial companies in the NBT is weak. Zolotaya Korona’s stake in the Tajik market is such that it would have to park around $2 billion in Tajikistan – a sum few if any international companies would feel comfortable entrusting to the NBT.

Jurayev argued that the ultimate outcome is likely to be that many people will go underground and resort to traditional, tried but risky methods.

“People will circumvent banks, send money through travelers, or switch to the hawala system,” he said, alluding to an arrangement whereby money is sent to its recipient throughout informal brokers. “We recall the early 2000s, when migrants would be robbed on trains and policemen confiscated money being carried illegally, and brokers were conned. So, once again, welcome back to the past.”