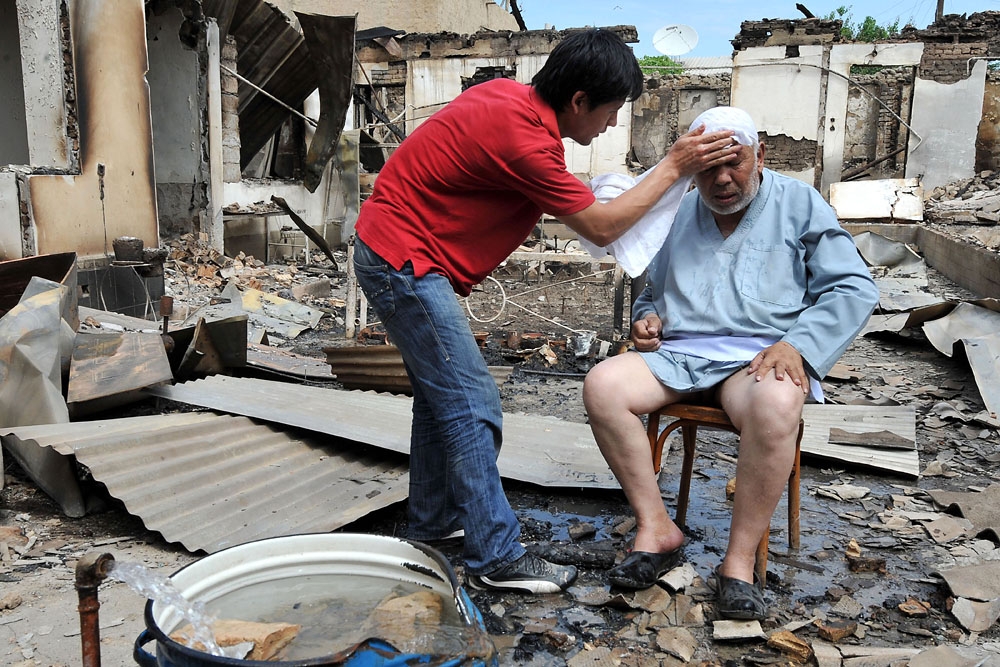 Attempts by the interim Kyrgyz government to control media coverage of the bloodshed in Osh and Jalal-Abad and to blame its political opponents for the unrest appear to be aggravating tensions in southern Kyrgyzstan. Uzbek community representatives, in turn, charge that the interim government has imposed de-facto censorship to conceal alleged ethnic cleansing in southern Kyrgyzstan.

In what was described as an attempt to stabilize the situation in Osh, officials on June 11 suspended the operations of Osh-based, Uzbek-language media outlets such as OshTV and Mezon TV. Residents in Osh and Jalal-Abad, the two southern towns most affected by the unrest, report that KTR and EL-TR, the only state-affiliated TV-stations allowed to cover the situation, are providing coverage that appears to downplay the scale of the tragedy.

In the latest measure, the Information Coordination Center of the Interim Government distributed a June 14 statement among major Kyrgyz media outlets that urged journalists to use data provided by the interim government as their only source of information, Ferghana.ru reported.

The statement also called on journalists to “abstain from calling the unrest interethnic because today it is clear that the root of the conflict are the provocations organized by armed militants and criminal elements to promote the interests of the political forces that support them.”

Kyrgyz officials blame ousted President Kurmanbek Bakiyev and his supporters for fanning the unrest in the south with the goal of undermining a June 27 constitutional referendum. On June 14, local media outlets reported that Paizullabek Rahmanov, a Jalal-Abad-based former Bakiyev loyalist and a member of Bakiyev’s party Ak Jol, had been arrested and accused of masterminding the violence in Jalal-Abad.

“In different parts of town, some people are driving around in cars with blackened windows and shooting at representatives of both ethnic groups [Kyrgyz and Uzbek],” Baibolov alleged to journalists, claiming to hold “irrefutable evidence and confessions of detainees.”

“These are groups consisting of impoverished citizens of Tajikistan who have been specially trained. They were hired by people close to the Bakiyev family, who lost power.”

Bakiyev has refuted the allegations that he plotted the clashes, saying that the interim authorities are trying to shift the blame for their own failures.

Some observers in Osh, where sympathies sometimes tend to run more strongly in Bakiyev’s favor, question the claim that Bakiyev’s supporters or criminal elements instigated the unrest in the region.

“Such allegations are partially true. But the causes of the conflict are deeply rooted,” commented Ulugbek Sokin, an ethnic Uzbek journalist based in Osh. “It is a result of pent-up frustrations, decades of animosity between the Kyrgyz and the Uzbeks.”

“It is clear that the complete weakness of the [interim] government brought about this tragedy,” Sokin continued. “If they had responded [to this crisis] with much stronger force, they would have been able to prevent this.”

One Osh resident, who remains in an ethnic Uzbek neighborhood cordoned off by make-shift barricades, argued that the government-run TV stations “are lying to people” about the scale of the clashes.

“They are showing things that suggest that nothing serious has happened,” he said. “They are not showing the bodies of hundreds of people who were massacred . . . “

Eyewitnesses in Osh estimate the number of people killed at 700; the interim government puts the figure at 178.

To counter the censorship, Uzbek community leaders are trying to deliver their own message. On June 13, Jalaluddin Salakhudinov, chairman of the Uzbek Cultural National Center, distributed an open appeal to Uzbek President Islam Karimov in which he called on Uzbekistan to take action in relation with the unrest.

Calling the bloodshed “a logical result” of Bakiyev’s treatment of Kyrgyzstan’s ethnic minorities, Salakhudinov asserted that “We have all the reasons to say that today we have a genocide of our people, which the current authorities are unable to stop.”

While the Uzbek government has not officially responded to Salakhudinov’s appeal, Uzbekistan’s Andijan State TV has offered extensive coverage of the refugees in camps built in the Andijan region, close to the Kyrgyz border.

In June 14 reports on Andijan State TV, refugees from the Osh region described the bloodshed as a state-orchestrated genocide. Some observers interpret the broadcast as a sign that the Uzbek government tacitly supports the ethnic Uzbek version of events.

One former adviser to ousted President Askar Akayev has taken issue with such depictions of the crisis.

“This thought is now spread across the whole world and is helping to shape a definite opinion about our [Kyrgyz] people as a violent, savage and unrestrained and blood-thirsty people,” Osmonakun Ibraimov fumed to AKIpress.