Confusion over border with Azerbaijan worries residents of southern Armenia

The handover of territory has brought Azerbaijani forces into close contact with several Armenian towns and a critical road, leading some locals to blame the central government for failing to protect them. 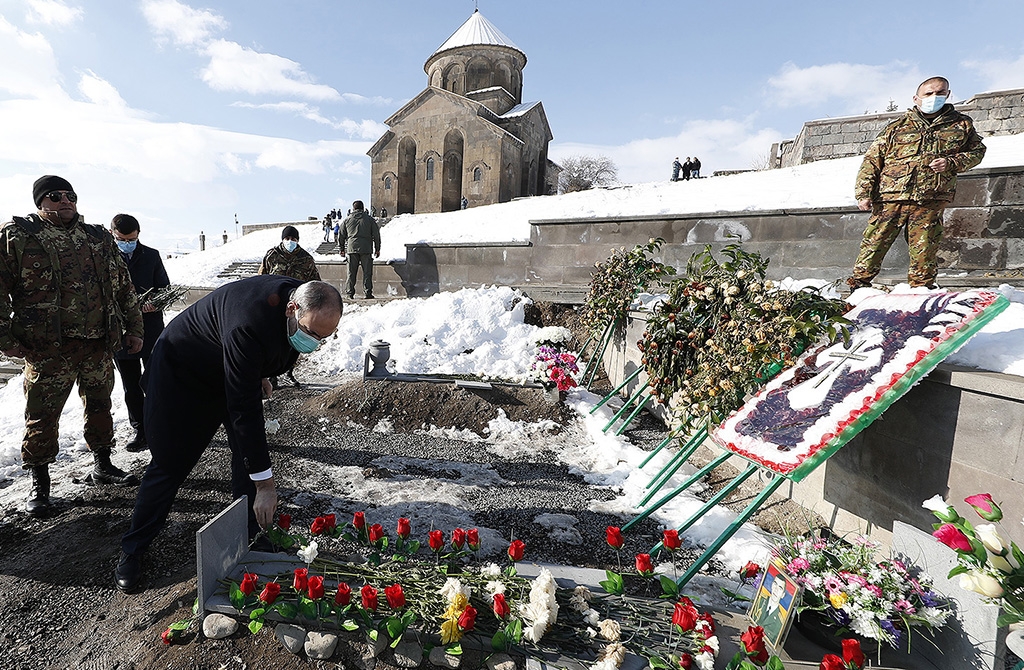 An Armenian military withdrawal from positions near the border with Azerbaijan has left many residents of southern Armenia feeling dangerously exposed and forcing Prime Minister Nikol Pashinyan to travel to the region to try to tamp down tension there.

On December 17, the mayor of the town of Kapan, Gevorg Parsyan, said that many positions that Armenian armed groups had held around the town would have to be abandoned the next day. Kapan lies directly on the border with Azerbaijan and the positions, set up during the recent war by volunteers, were inside what is internationally recognized as Azerbaijani territory.

Hundreds of residents protested, saying the withdrawals would leave them exposed to Azerbaijani forces. The fears were multiplied when videos appeared of Azerbaijani soldiers apparently on the road between Kapan and Goris. Some sections of that road, at least according to open source maps, go through de jure Azerbaijani territory.

The road was built during the Soviet era, when internal boundaries meant little. Then during the first war between Armenia and Azerbaijan in the 1990s, Armenians gained control of the Azerbaijani territory on the other side of the border, in the Zengilan region, making the precise location of the international border again irrelevant. But Armenia was forced to give Zengilan back to Azerbaijan under the November 10 ceasefire agreement ending the war and now Azerbaijan again controls territory very close to populated areas and roads in Armenia.

“Our villages are near these roads and now we are surrounded. Many people will be captured on that road,” one protester told RFE/RL on December 18.

Parsyan said locals feel that they have to provide for their own security. “The main participants in the demonstration are the volunteers who have been protecting the borders of the Kapan community,” he told local news website Civilnet. “If they leave those positions, Kapan will find itself in a compromised situation, including the strategically important Goris-Kapan road.”

Also on December 17, Armenia’s Ministry of Defense said that Russian border guards, who have patrolled Armenia’s borders with Turkey and Iran for decades, will now be deployed to Syunik.

In the new arrangement, Russian border guards will set up posts on the 21-kilometer section of the road between Goris and the village of Davit Bek, Vagharshak Harutyunyan, the newly appointed minister of defense, said in a December 20 interview with the official military media outlet Zinuzh. Armenian soldiers will exercise “visual control” of the road from their territory and the precise location of the Armenian, Azerbaijani, and Russian positions will be agreed on by a commission with representatives from all three sides, Harutyunyan said.

All this time, Azerbaijani officials have not said anything publicly about the demand to vacate the military posts around Kapan or the new road-monitoring arrangement.

Meanwhile, Armenian officials have said that they are working on a proper demarcation of the border. “The demarcation is being carried out on the basis of particular documents,” Armen Grigoryan, the secretary of Armenia’s national security council, told reporters. In an interview with RFE/RL Pashinyan said that Armenia would not “lose one inch” of its territory as a result of the process and that it was being undertaken using Soviet-era maps.

All this failed to quell tensions in the affected region and on December 21, Pashinyan traveled to the province of Syunik to meet with residents. He was greeted by protesters who attempted to block his motorcade and clashes between protesters and police resulted.

Among those calling to protest the prime minister’s visit was Goris Mayor Arush Arushanyan, who ahead of the visit wrote on his Facebook page calling on people to block Pashinyan’s entry into the town. Arushanyan was arrested and the state Investigative Committee said it was looking into whether or not the call to protest violated the law. As a result of the protests, Pashinyan was not able to visit several of the towns on his itinerary and was forced to turn back before Goris.

In Sisian, Pashinyan told residents that the new arrangement would protect them, noting that the region was now also effectively the border of the Russia-led Collective Security Treaty Organization. “There is a lot of talk now that we are handing over Syunik [to Azerbaijan], that this is threatening the security of Syunik, but in fact it is the complete opposite,” he said.