An outlet with a history of publishing attacks on women has launched an online talk show to fight gender stereotypes. 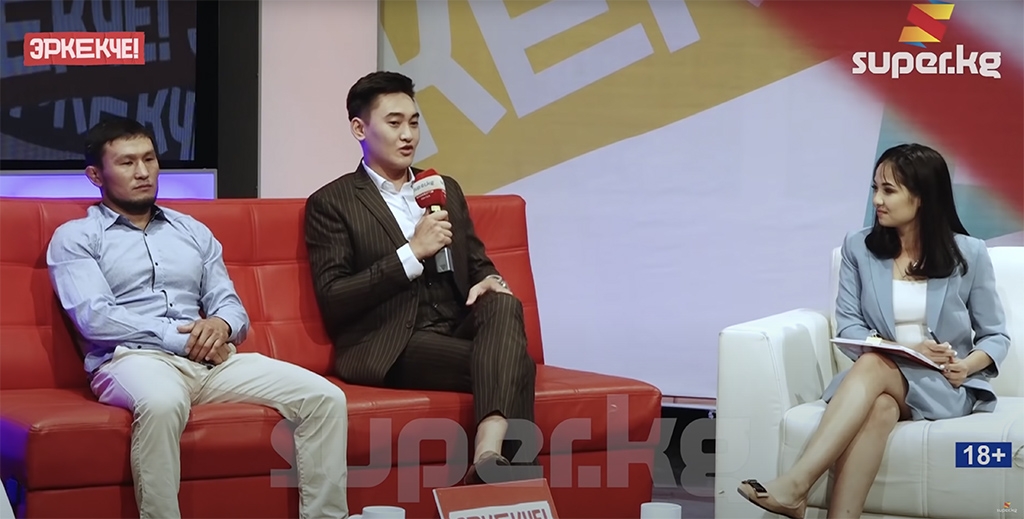 A screenshot from the inaugural episode of Erkekche.

Kyrgyzstan’s largest-circulation newspaper, the flashy Super-Info tabloid, made its name with celebrity news and sexism, while deferring to conservative social mores.

Over two decades, Super-Info expanded into the digital realm, launching a streaming website Super.kg, a YouTube channel with close to a million subscribers, and an Instagram page with 1.8 million followers. Now, the Kyrgyz-language entertainment empire is setting its sights on some of the country’s most contentious social problems with a new weekly talk show about gender equality.

Launched on September 24 and titled Erkekche – “Manly” in Kyrgyz, to attract a male audience – the first episodes of the one-hour show covered male reproductive health, bride kidnapping and street harassment. Producers, who are working in partnership with UNICEF, say upcoming shows will feature discussions on alimony, domestic violence, and sexual education.

That is unusual fare for Kyrgyzstan, where women’s rights rallies have, in recent years, been violently disrupted by nationalist groups. While bride kidnapping can spark small protests in Bishkek, it is still romanticized in Kyrgyz comedy, advertising, and pop culture.

For many years, Super-Info fit comfortably into this chauvinistic mainstream. In 2017, the paper ran an interview with a comedian under the headline, “If a woman doesn’t obey, she should be beaten.” During one prank, staff kidnapped a female television host at gunpoint.

“There’s a lot of violence in our country because women don’t know their rights,” Nargiza Umotova, the commercial director for Super-Info and a project manager for the show, told Eurasianet. “They think that being beaten is a norm, they don’t get an education because they marry early. It has become widespread. We, as the number-one media outlet in Kyrgyzstan, decided to raise awareness that [these things are] wrong.”

“Show business used to be the main content of Super-Info. Now we have more sections about social issues,” she said. “Readers send in their questions anonymously, and we have lawyers and psychologists to give them advice. We try to bring in not only celebrities but a more versatile cast of individuals who have contributed to society.”

Last November, Super-Info published a cover story against violence against women as part of a UN-led campaign. In April, the paper took a position against “bride kidnapping” for the first time, calling it “not a tradition but a crime.”

Erkekche is still a work in progress, with the host appearing unsure how to lead conversations on delicate topics.

The first episode featured a panel of men sounding off about pet peeves. One of the guests, a model, lamented that Kyrgyz men view taking care of oneself as unmanly, and assured the others that his modeling school “doesn’t propagate bad things, only etiquette and self-presentation.” Another guest, a law enforcement officer, decried social media for undermining patriotism among young people. A urologist said that infertility is not only an issue affecting women, but that men rarely seek medical help and often pass sexually transmitted diseases to their partners. Then a religious scholar falsely claimed that masturbation causes erectile dysfunction.

The banter reflected existing misconceptions in Kyrgyz society. Indeed, according to a 2020 report by a local NGO, information on sex and reproductive health is harder to find in Kyrgyz than in Russian. And overall, it reported, only 27 percent of Kyrgyzstan’s schools offer courses on reproductive health and family planning.

Unsurprisingly, some Super-Info fans aren’t ready for the new show.

“We have received hateful messages on social media,” said Umotova. “But there’s always hate when you do something right.”