The statue would be the tallest to the savior in the world, but the proposed site is archaeologically significant and a government ministry has ordered the project halted pending review. 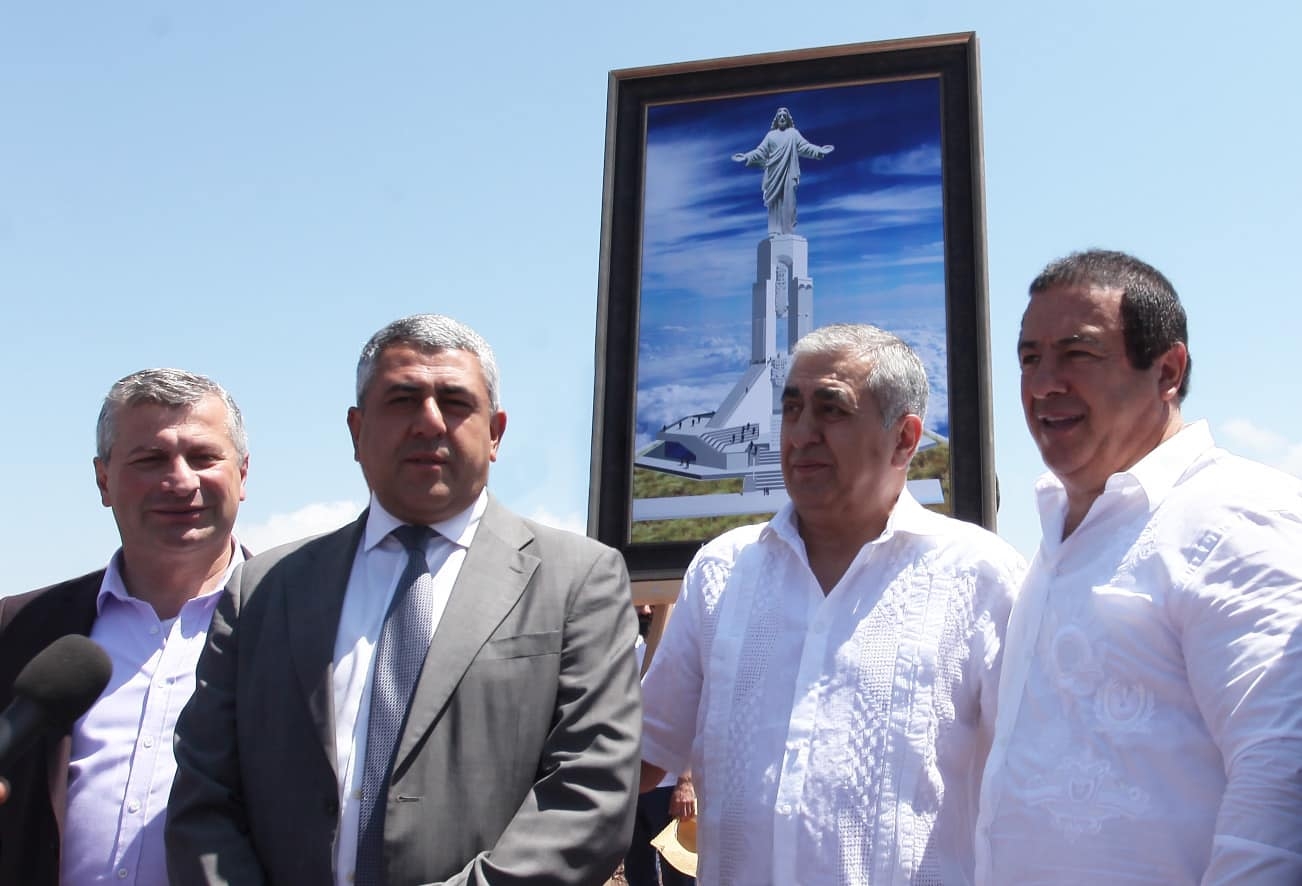 Gagik Tsarukyan (right) at the groundbreaking ceremony for what would be the tallest statue of Jesus in the world. (photo: Facebook, Gagik Tsarukyan)

The return of Jesus Christ to Armenia – in the form of what would be the world’s largest statue to the savior – has hit a snag.

The country’s Ministry of Education, Science, Culture and Sports on July 10 ordered a halt to construction of the statue, citing concerns about the archaeologically significant site on which it is supposed to be built. The next day, the Ministry of the Environment announced that construction had in fact been halted.

The statue has been the source of controversy and mockery since tycoon and former opposition leader Gagik Tsarukyan announced earlier this year that he planned to build it. The statue itself would be 33 meters tall, and with the pedestal, 77 meters – more than double the height of Rio de Janeiro’s Christ the Redeemer statue.

The proposal got preliminary government approval on July 7, and Prime Minister Nikol Pashinyan praised the statue as being a boon to tourism. “Our initial opinion is positive since we think that it will significantly increase tourist interest,” he said during a cabinet meeting discussing the proposal. But Pashinyan also added that the relevant government organs were still reviewing documents submitted as part of the proposal.

Pashinyan’s endorsement got some pushback: two days later, the Association of Professional Tourist Guides in Armenia wrote an open letter disputing the notion that the statue would be a significant tourist attraction. It also noted that, unlike in Catholic countries like Brazil, Armenian Christianity does not have a tradition of statuary.

“Tourism cannot exist in fabricated, false conditions,” the letter read. “After all, tourists come to see and experience real life. And how consistent would it be for them to see a huge statue of Jesus on top of a mountain in a country where even small statues do not exist in churches?” It concluded: “We request and demand to stop the implementation of this anti-national, anti-cultural, anti-natural, and anti-aesthetic project.”

The proposed site of the statue is Mount Hatis, about 30 kilometers northeast of Yerevan. The 2,528-meter mountain is the site of some 20 sites registered in Armenia’s list of cultural and historical monuments that are protected by the law, including a Bronze-Iron Age fortress discovered in 2019.

But Tsarukyan owns 146 hectares of land on the mountain, which he bought in 2008, including the top of the mountain on which the statue is to be built.

Tsarukyan didn’t waste any time, and took Pashinyan’s statement as a green light in spite of the lack of formal approval. On July 9 he officially opened the site with a groundbreaking ceremony attended by Economy Minister Vahan Kerobyan and the secretary-general of the World Tourism Organization, Zurab Pololikashvili.

“A few years following this historic day, the statue of the Savior will rise in Armenia as a symbol of unity, hope, and light,”  Tsarukyan wrote in a Facebook post.

But the culture ministry had other ideas. On July 10 it said that Tsarukyan’s charity foundation had never responded to queries it had sent about the statue’s proposed location, and that the proposal would have to be reviewed in light of Armenia’s law on protection of historical sites. The next day, the environment ministry announced that construction had been suspended.

The same day, the Ministry of the Environment reported that it had not received the paperwork from Tsarukyan’s foundation required for its approval, as well.

Tsarukyan has yet to respond to the ministry’s announcement.